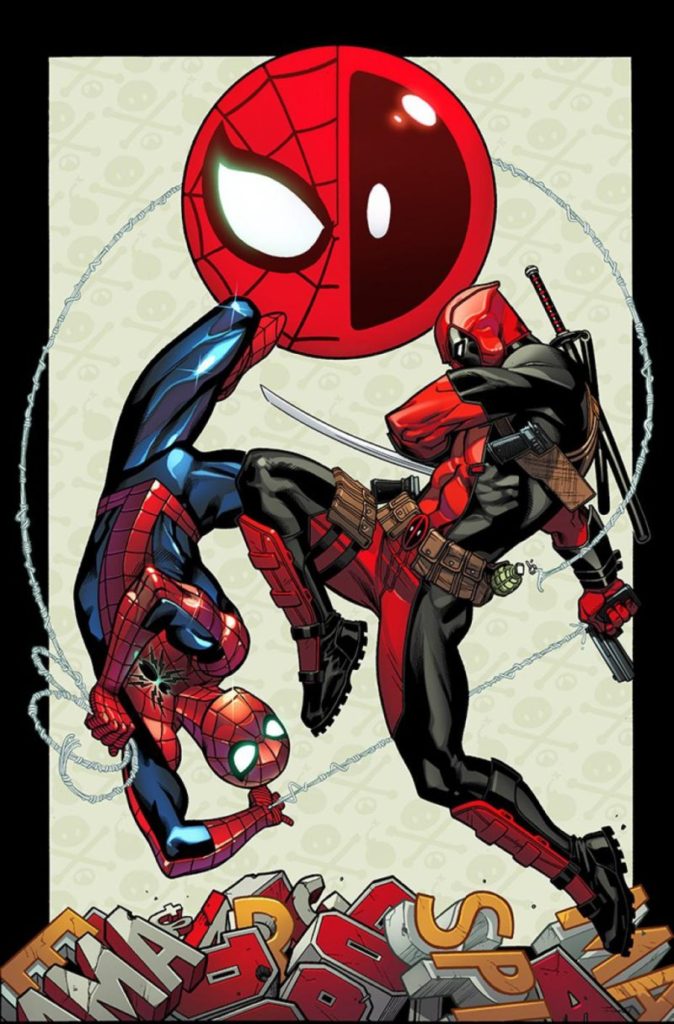 I had been meaning to check out the Spider-Man/Deadpool team up comic for a while now.  While I have never been the biggest fan of Spider-Man, I love Deadpool and his dynamic with Spider-Man is a lot of fun. (Or it is for Deadpool anyway. Spider-Man is not a fan.) The first volume of this comic did not disappoint.

This volume collects Spider-Man/Deadpool issues 1-5 and 8. It is written by Joe Kelly, who penned Deadpool comics in the late ’90s. He makes Deadpool not only genuinely funny, but gives him real depth as well. Deadpool isn’t an easy character to crack.  He’s famous for his jokes and breaking the fourth wall, but he has a lot of pain as well. He’s looking for people to connect with, and Kelly doesn’t shy away from that.  Deadpool comes across as someone who, while annoying, really does want Spider-Man to be his friend. It’s a little heartbreaking, which isn’t often a word I use in association with Deadpool.

Spider-Man, by contrast, is very angry and annoyed with Deadpool. He doesn’t appreciate his jokes, his aptitude for killing people, and just who he is in general. Deadpool is the reason that Spider-Man left the Avengers.  However, as the story progresses, Spider-Man comes to find that maybe Deadpool isn’t so bad after all.  In the end he does decide it might be okay to give Wade his phone number.

One question that often comes up with the Deadpool and Spider-Man relationship is, is Deadpool really attracted to Spider-Man? In reading this comic run, it’s not entirely certain. Deadpool makes a number of jokes that are sexual in nature toward Spider-Man, and he also has him on a “Free Pass Deadpool Top 5” list that was “pre-negotiated and signed by Shiklah (his wife) ages ago.” My thought is that he may be attracted to Spider-Man, but he cares more about getting an emotional rise out of him than anything else. Regardless, it is very evident that he wants Spider-Man for a friend.

Overall, I quite enjoyed the first volume of Spider-Man/Deadpool. It has the right level of comedy, action, and depth to make it a fun comic that tells a good story.

Previous:Eliza Taylor Wants to Build a School in Thailand
Next: “Justice League Dark” Is Fun for Fans, But Not the Best Intro for Newcomers