Boruto: Naruto Next Generations 1×156 Review – ‘I Can’t Stay in My Slim Form’ 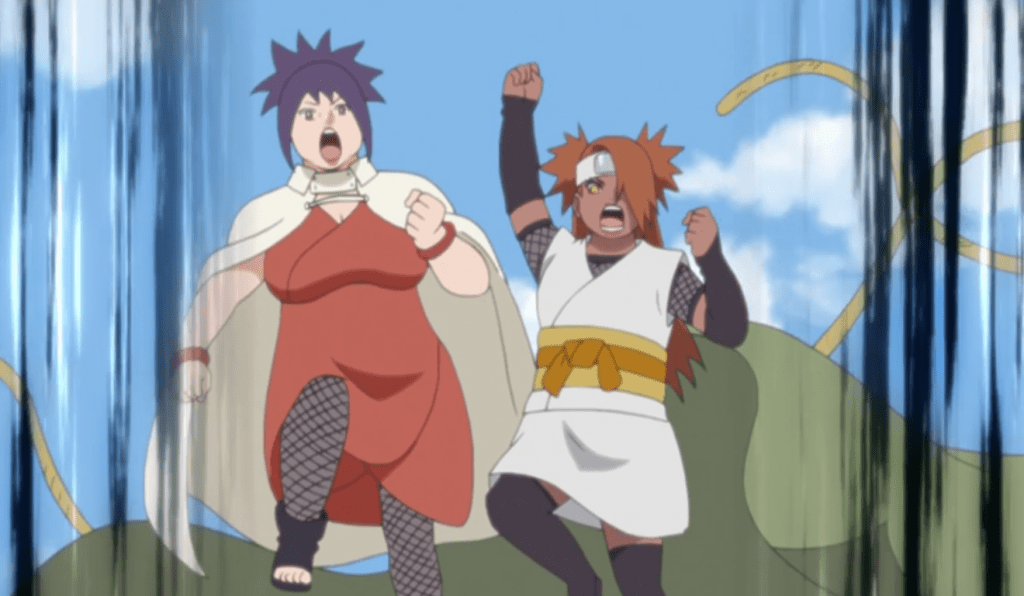 Anko and Chocho in ‘I Can’t Stay in My Slim Form’ (Image: Screengrab)

‘I Can’t Stay in My Slim Form’ was a Chocho-centric episode that I enjoyed very much. Due to the manga not focusing on side characters, I always appreciate the anime dedicating occasional episodes to Boruto’s friends.

I know that certain parts of the Boruto fandom don’t like Chocho and find her annoying. Well, I like Chocho as a character. And while Boruto seems to be close friends with Shikadai, having Chocho around lets Salad have a close friend, too. Chocho was with Salad when Salad went to find Sasuke. The two young ninjas share a strong bond.

That’s why I was surprised when Salad wasn’t with Chocho in ‘I Can’t Stay in My Slim Form’. However, after I saw what Chocho had to deal with, having Salad around would have offered a very easy solution to Chocho’s problems.

The episode opened with Chocho training with her father, Choji. She still hasn’t mastered the Secret Clan Technique and Choji told her she needed to access some strong feelings to reach her potential when activating her Butterfly Mode.

We all know that Chocho, like her father, loves eating food. So, of course, her adventure involved food. Due to thieves stealing deliveries of beans, Chocho and Anko decided to put a stop to said criminals. What followed was an opportunity for Chocho to tap into her feelings. Her drive to protect the beans and Anko was what led her to master the Butterfly Mode.

One of the reasons certain fans don’t like Chocho is because they think she’s another character that’s used to display the ‘chubby-comedic-person’ trope in media. And while I do understand the complaint, I think the writing team has done a good job, over the course of this anime (the current offering being the 156th episode), to showcase that Chocho’s more than comfortable with her physical proportions. The young ninja has grown out of her need to lose weight to fit society’s standards of what’s considered pretty.

I think that’s a great message to share with a younger audience. Not everyone, even if they live an active lifestyle, can have a modelesque body and that’s okay. It’s just how their body naturally is.

A part of me dreaded that ‘I Can’t Stay in My Slim Form’ was going to be another story focusing on Chocho’s weight (especially, due to the episode’s title). However, it was revealed that the title was related to Chocho’s motivation to regain her ‘average’ weight so she could use her full power.

Again, with the Boruto manga not taking the time to flesh out the secondary and supporting characters, I welcome the anime showing us what Boruto’s peers have been up to and how much they have grown personally and as capable ninjas.

Now, the upcoming episode is what the fandom is really looking forward to. Judging by the preview, we’re going to have Sasuke and Sai teaming up to collect information about the Kara organization. The anime is closing in on adapting the manga and I can’t wait!

What did you think of ‘I Can’t Stay in My Slim Form’? Let us know.