The Steven Universe In Too Deep event concluded with a classic baseball episode, “Hit the Diamond.” Are you Team Ruby or Team Crystal Gem (and Lapis)?

A ship has crashlanded on Earth, filled with a troop of Rubies eager to apprehend the leader of the Earth mission. Peridot is terrified, but our heroes are dedicated to protecting her. Garnet defuses so that our Ruby can infiltrate their ranks, but things quickly go off the rails when Steven convinces them that they will only be able to investigate the barn if they win an “interspecies” game of baseball. 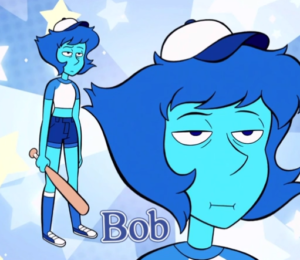 The Crystal Gems are outnumbered, Lapis is thoroughly unenthused, and none of the Gems are particularly good at keeping their cover as ordinary humans. The greatest threat to their victory turns out to be something utterly unexpected; Ruby and Sapphire’s unrepentant flirting!

Eventually, Sapphire is able to tear her attention away from Ruby long enough to hit a game-winning homerun… only for the two of them to fuse and reveal the whole trick. Peridot rushes out, desperate to save her friends from the Rubies’ wrath, but it seems that Peri isn’t who they’re looking for at all. They want Jasper. None of the Gems have any idea where she is, but Steven sends the Rube Troop on a wild goose chase to Neptune, leaving Earth safe… for now. 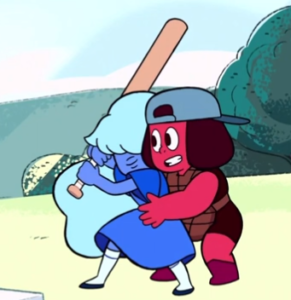 The fandom’s been smitten with Sapphire and Ruby since their first official appearance in “Jail Break”, but almost by their very nature, their appearances have been few and far between since then. Only the strongest of emotional and physical trauma will tear Garnet apart, so we’ve otherwise only seen the two in flashbacks and high stress situations. A baseball game was a comparatively casual situation, and it was absolutely adorable seeing their dynamic when they’re not terrified or furious. Ruby is lovably awkward and earnest, yet also suave and smooth, throwing down pick-up lines left and right. ‘Sophie’ got a chance to display Garnet’s level-headedness, yet also showed a sweeter and sillier side. The pair works amazingly off one another, creating a dynamic which simultaneously feels like puppy-love teenagers and a long-time married couple.

While our Ruby was great, I would be remiss not to mention the five other Rubies that shared the spotlight. Big shout-out to Charlyne Yi, who voiced all of them with aplomb, keeping them part of a set while still making them unique individuals. From the credits, the Rubies even have unofficial nicknames: Eyeball, Doc, Army, Navy, and Leggy. Adorable. 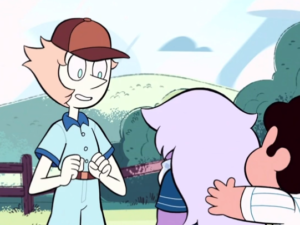 Something very interesting is how varied their personalities are. The Rubies in “The Answer” were our first real introduction to the Gem-caste system, and they were shown to be functionally identical. Same uniforms and same personality, with the exception of our Ruby being relatively more level-headed. From a narrative perspective, there are clear reason why those Rubies were so homogenized. “The Answer” was deliberately fairytale-esque, with simplified characters. Those Rubies were only a small part of the story, while here they’re the focus of the episode. Lastly, as a story being told to Steven by Garnet, it’s possible she overstated their similarities, as a way of expressing Ruby’s insecurities about her own individuality.

That issue of individuality is going to be important moving forward, I think. When she first fell to Earth, our Ruby didn’t care at all about the risk of being shattered— “Who cares? There’s tons of me!” She also described a multi-Ruby fusion as being “me, but bigger”. Yet “Hit the Diamond” has proven that there is diversity within Gem castes. Is this something that’s developed over the past five-thousand years, perhaps as a remnant of Crystal Gem philosophy that managed to permeate Homeworld society at large? Or perhaps this particular set of Rubies, being grunt soldiers allowed to travel the universe with little oversight, were given more chance to diversify than a set of official aristocrat security guards. Either way, the question of gem-individuality is certain to come up again, even if it’s in the context of Pearls, Amethysts, or other Gems entirely. 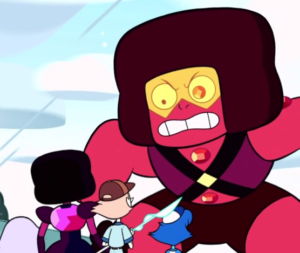 The regular cast was hitting home runs this whole episode, as well. They might not have been the focus, but Amethyst’s intensity and Pearl’s deadpan snarking made for some excellent background moments. We also get to see what Lapis’s addition is going to offer the new group dynamic. In the past, we’ve seen her in basically two modes: uber-intense water witch and Steven’s sweet-hearted Summer Fun Buddy. Here, we see her attitude when she just doesn’t care. Armed with an endless supply of sarcasm and blank stares, Lapis serves as a wonderful ‘straight’ man to the wackiness unfolding around her.

“Hit the Diamond” concludes the In Too Deep event, and what a great four weeks it has been. Next up is the “Summer of Steven!”

Previous:Quiz: Which Ruby Are You?