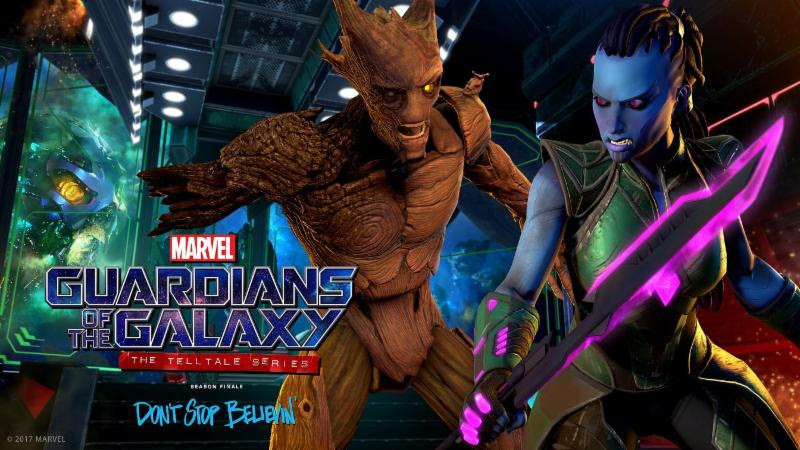 Fans will be able to play the fifth and final episode of Marvel’s Guardians of the Galaxy: The Telltale Series on November 7, 2017. The final episode is titled ‘Don’t Stop Believin.’ A new trailer has also been released!

Telltale Games and Marvel Entertainment recently released the launch trailer for ‘Don’t Stop Believin,’ the fifth and final episode in the first season of Marvel’s Guardians of the Galaxy: The Telltale Series. The episode will retail for $4.99 USD or equivalent on November 7, 2017.

Fans can download individual episodes or the series as a whole for their PS4, Xbox One, PC (Mac and Windows), iOS, and Android devices. A ‘Special Pass Disc’ is also available for an MSRP of $29.99. It has the first episode, ‘Tangled Up in Blue,’ and grants access to the other available episodes via online updates.

In the aftermath of an unbearable sacrifice, the Guardians finally fracture. With her opposition in shambles, Hala renews her campaign of death and devastation, carving a path of indiscriminate destruction en route to Knowhere. If he hopes to avoid catastrophe (and save his own skin), Star-Lord must search his feelings, reunite his team, and mount one final mission to save the galaxy…again.

The Marvel’s Guardians of the Galaxy: The Telltale Series boasts a voice cast which includes Scott Porter as Star-Lord, Emily O’Brien as Gamora, Nolan North as Rocket, Brandon Paul Eells as Drax, and Adam Harrington as Groot.

The live-action film Guardians of the Galaxy Vol. 2 was also released this year. It went on to gross $863.6 million at the worldwide box office on a budget of $200 million (excluding advertising).

I wonder if Telltale Games will continue with this series, or if they’ll switch their focus to another Marvel Comics property.

The company will also be releasing The Walking Dead: The Telltale Series Collection on December 5, 2017.

Feel free to share your thoughts about Marvel’s Guardians of the Galaxy: The Telltale Series with us. Are you excited for ‘Don’t Stop Believin’?