Storm #6 Review: The Power of Storm! 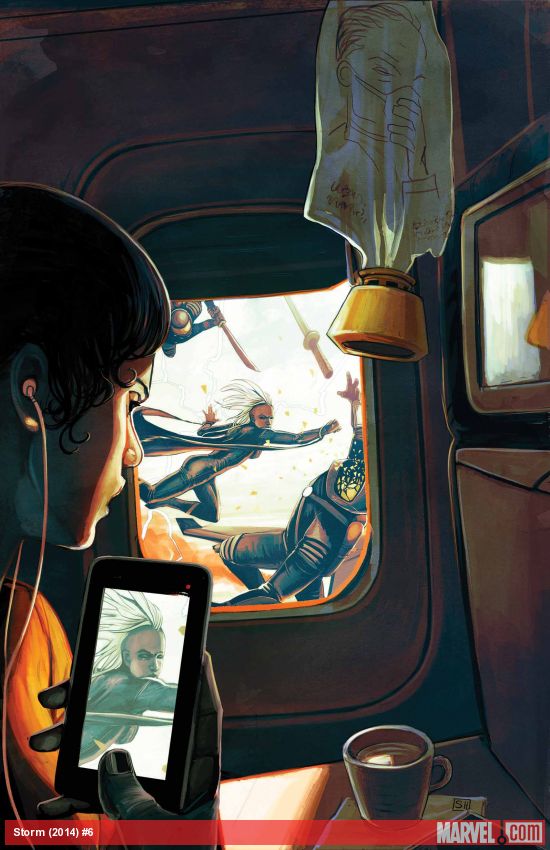 This month’s issue of Storm showed Ororo Munroe going back to New York and encountering some new enemies along the way.  Things haven’t been looking good for the Weather Goddess since her encounter with Yukio in Las Vegas, and I’m anxiously waiting to see how she will finally deal with it all.

Seeing Yukio manipulating Storm was a shock for me. Those two have been friends for years. Even though Yukio is a ninja-assassin I wasn’t expecting her to do such a thing. Storm was cold towards her as she reached the airport to go home. Ororo tried to make things better by saying that she did what Logan would’ve done for Yukio, but deep down she felt betrayed by her old friend. Her clan fight also gave her a broken rib and an ankle which she was still recovering from.

Ororo’s plane ride had some enjoyable conversations with the passengers. Greg Pak has been doing an amazing job in the series by focusing on Storm dealing with normal challenges rather than giving her famous villains to fight every month. This issue told readers that ordinary people who do something for the good of humanity are heroes too, just like any other Marvel hero out there. 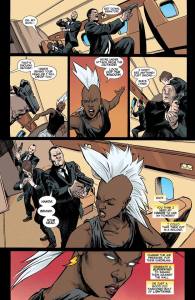 Greg Pak also showed the prejudice people hold against others they don’t understand. An old woman refused to fly in the same plane as Ororo because she was a mutant who controlled the weather. Not only that, the moment the plane was attacked by one of the four clans, almost every passenger immediately held Storm responsible for it. Even a senator blamed her for the attack and one of his bodyguards hit her injured ankle.

Seeing everyone ganging up on her while she tried to explain the situation to them was very tough for me. She could’ve easily knocked them out but she held herself back. That’s one of the things I love about her. Storm is a very powerful mutant who can wreck global havoc if she wanted to but she has to keep all of her power and emotions in check as the slightest imbalance in her emotions can alter the weather patterns.

The action-sequence showing Storm beating down the attackers and keeping the crashing place in the air was amazing to see. After defeating the flying soldiers, sent by one of the four clans Yukio took leadership of, Ororo Munroe grabbed the plane from below and flew it to New York herself! Talk about awesome!

Reaching the airport wasn’t a happy affair for her because she was exhausted after carrying the plane for five hours and the senator told the media she had hijacked them all. I have a feeling someone is pulling the strings from the shadows. There’s no way someone would be stupid enough to think Storm, a well-known mutant hero, was harming them. I can’t wait for the next issue to see who has it for Storm and why he or she wants the Weather Goddess out the picture.

Have you read Storm #6 yet? What did you think of the panel that showed her carrying the whole plane? Are you doing your part to Save Storm? Let us know!

Previous:The Hobbit: The Battle of the Five Armies Review
Next: Dear Geekiary – Supernatural: Women in Season 10