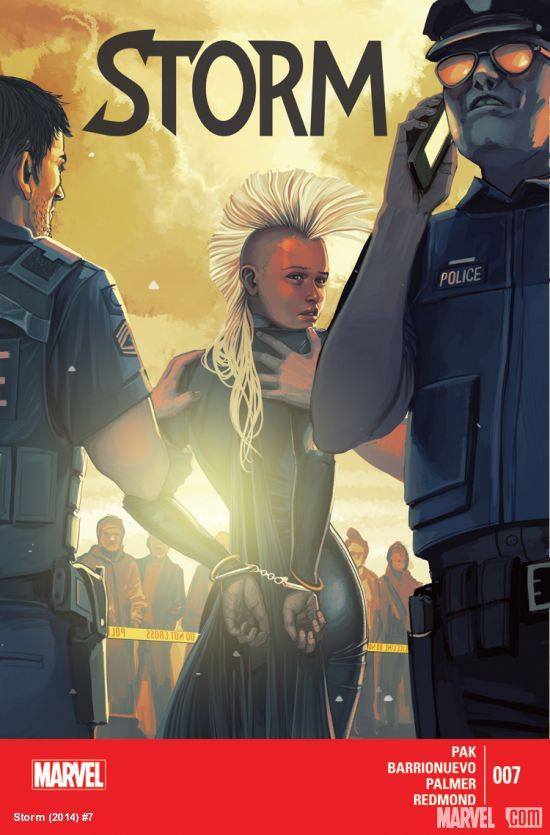 Storm #7 picked up where the previous issue left off. It didn’t stop giving Ororo fans some amazing action-sequences and a gripping plot. Greg Pak is doing an awesome job writing Storm and making the Weather Goddess realize that there will always be bad people who don’t like it when someone stands up to them.

First of all, let’s talk about the cover art. I’m a fan of Stephanie Hans but this month’s cover felt a bit weird to me. I like how the art makes Storm look vulnerable; I just don’t like how young she looks in it. I might be wrong, but isn’t Ororo Munroe supposed to be in her 40’s in canon?

The events that took place in Storm #6 were a clear indication that someone was pulling strings from the shadows and wanted Storm out of the picture. Being manipulated by Yukio and battling to end the Four Clans crime syndicate clearly had consequences Ororo wasn’t expecting. Even though she left all the drama back in Las Vegas, a leader of one of the four clans, Davis Harmon, targeted Storm and got her arrested. For those of you who don’t know, Davis Harmon is an arms dealer.

Ever since Storm started Greg Pak has had her deal with issues that can be considered as quite normal in the Marvel comic book verse. Ororo went out of her way to help people in need, regardless of them being mutants or not, and now the consequences of her decisions have caught up to her. I liked how Greg Pak decided to use a villain we can relate to in real life, and how people like him actually manipulate politicians, and other people in power, to do their bidding.

Issue #7 also showed readers that Storm is more than just her powers. The US government had her under arrest and even put power dampeners on her. However, being an excellent pickpocket, and also having learned hand-to-hand combat under Wolverine, she was able to escape and set out to clear her name.

Though the Senator blamed Storm for attacking him, the general public was on her side and I liked how they rallied together to support her. In the end, Storm went rogue, tracked down the Senator who framed her and took it upon herself to reveal that Davis Harmon was behind it all.

One of the best things about Storm #7 was Ororo showing awesome displays of her power and skills. It took Ororo only a minute or two to unlock power dampening manacles, dodge bullets fired at her, freeze guns, destroy a mansion, and my personal favorite – divert the trajectory of bullets with air pressure. Sounds awesome, right? And she did all that while recovering from a broken rib, ankle, and on sedatives. Talk about will power!

I would like to thank Greg Pak for making my wish come true. I always wanted to see Storm use a shield made of air to protect herself from damage in comic book canon.

Storm really is a powerhouse and it is high time readers are reminded what she’s capable of. She’s a female POC mutant who is just as compassionate as she is strong. I can’t wait for the next issue.

Did you read Storm #7? Have you joined the #SaveStorm campaign? Let us know!