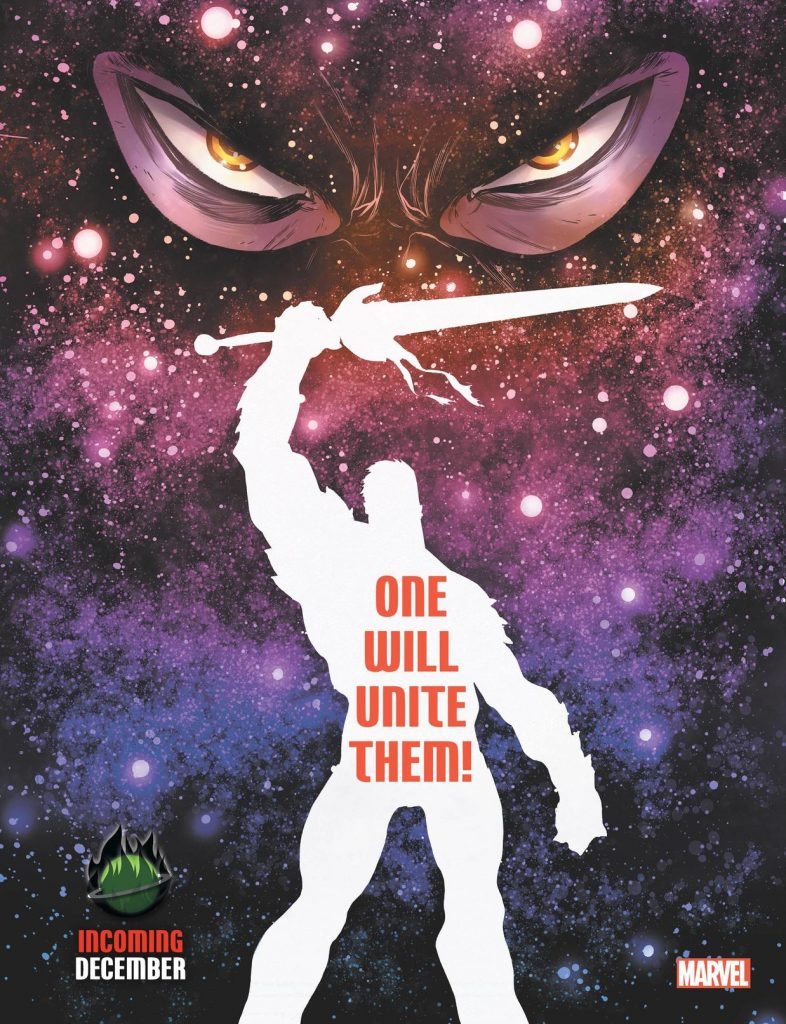 During Disney’s D23 Expo, promo art for Incoming was shared. Apparantly, the story is going to redefine the Marvel Universe. Please tell me that’s Hulkling’s silhouette!

If you have been following my comic book coverage, you would know I’m a huge fan of Wiccan and Hulkling. Both characters are openly queer in the Marvel Comic Book Universe and are rightfully an OP power-couple. Wiccan is the Demiurge while Hulkling is the King of Space. Talk about queer representation that’s in charge of the cosmos!

While we do get stories about Wiccan (Billy Kaplan)- the current Death’s Head mini-series is about him and he will be a team member on September’s Strikeforce– I have been waiting for Hulkling (Teddy Altman) to be the focus for quite some time now. It seems my wish will be granted when Incoming comes out this December.

Even though Marvel Comics hasn’t shared who the mystery character (holding a sword) in the promo art is supposed to be, many on social media are only able to see Hulkling perfectly fitting such a silhouette. It has to be him, right? It has to be!

Judging by some of the words and other visual hints, “One will unite them” seems to talk about Teddy’s Skrull and Kree heritage. Y’all, I’m so excited!

The announcement was made by Marvel Comics Editor-in-Chief C.B. Cebulski and Executive Editor Tom Brevoort.

“This really sets the course of what you’ll see in the Marvel Universe in the years to come,” Cebulski said in a statement.

According to Marvel’s website, the Incoming one-shot will “shape the future of Marvel Comics into 2020 and beyond. From a single moment in the pages of the Dark Phoenix Saga to the events of Marvel Comics of today.”

No official release date has been shared. However, a preview will be found in an exclusive edition of Marvel Comics #1000 which will be available on August 28, 2019.

With numerous fans speculating about Disney/Marvel working on a Young Avengers live-action series for Disney+, I wouldn’t be surprised if we begin to see more of Wiccan and Hulkling in comic books. I’m here for it all!