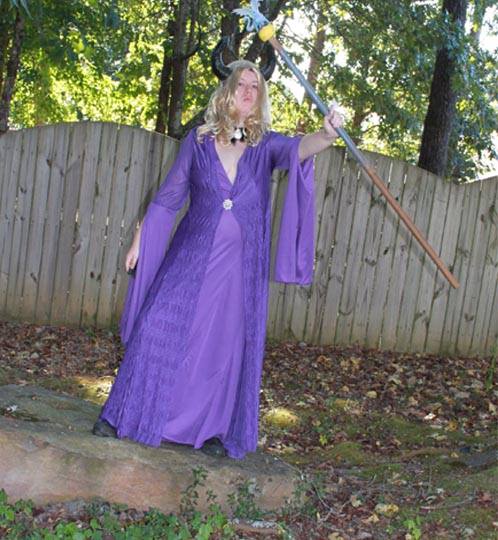 For Dragon Con week, I bring you Becca – a cosplayer who, thanks to our mutual love for The Walking Dead, I actually met at Dragon Con last year! Becca is a Georgia native and she and I co-admin the Dragon Con Walking Dead Costuming Group on Facebook.

I first started actually cosplaying when I was about 14 years old. My best friend from middle school got me into it – I thought it was so cool that she got to be in the Dragon Con parade dressed up as a Jedi or Ewok.

I did always make my costumes. Once I learned what actual “cosplay” was, I felt like the costume should be made and not bought, although I’m okay with buying accessories for a costume. For example, with Captain America, to make that uniform was nearly impossible – but I was lucky enough to have a friend give me an old padded motorcycle jacket that they weren’t using and I was able to alter it. I think that’s just as good as “hand sewing” or using worbla. 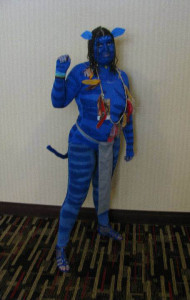 I’d have to say my all time favorite costume to make and wear was when I dressed up as Neteryi from Avatar. It was right after the movie was released and I don’t think anyone at Dragon Con really expected to see that character yet. I got stopped so many times for my picture to be taken and I entirely enjoyed it!

I would have to say my dream costume would be a character from World of Warcraft, and especially if it was one of my own characters. I love how the Death Knights look in the game, and I would love to be able to airbrush my skin that color and make the armor. I think it would be really fun to make such a character – something of my own creation from the game.

I haven’t yet, but if I ever do decide to do any charity work it would probably be something with people who have dealt with or or are dealing with cancer.

I’m also an amateur photographer and practice my photography a lot at conventions. At one point I’d like to do it professionally but right now I just do it for fun.

I’d have to say probably the other way around – I was already into photography, and then realized how much fun it would be to photograph cosplay! 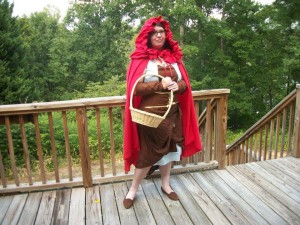 Yes! Do it for yourself, do it for the fun of it, and try not to care what others may think of how it will look. Do it for fun, and try your best. Don’t be disappointed if you don’t get a lot of attention from others or get your photo taken a lot. It will happen one day! (It may even happen the first time, but most importantly just do it for yourself and for fun and try to make friends through it!)

For people to not be so negative if a cosplay isnt exactly right, or doesn’t have the correct this or the proper that. To stop the endless critism – which has mostly been negative lately – and to try to have a positive outlook on whatever it is that people are cosplaying. That a cosplay doesn’t have to be perfect. To be more accepting like how the community used to be.

I’d have to say my most meaningful memory of involving cosplay is when I was cosplaying Neteryi and everyone seemed so excited about it – or really, when anyone recognizes a cosplay that I do and gets excited about it!

Obviously Becca will be at Dragon Con along with myself and many of the other cosplayers I’ve interviewed…so as I’ve said before, if you’ll be there, keep an eye out for any familiar faces from this Summer Cosplay Series!

Previous:Naruto x 690 Review: Ninjas…!!
Next: “Underworld” Reboot! Are We Ready?