This week we’re featuring an awesome cosplayer who I’ve been lucky enough to meet and hang out with. Meg is probably best known for her awesome Starbuck cosplay, but she has some other great ones ‘up her sleeve’ (if you will) as well!

A friend of mine had been attending anime conventions for years, and I decided to go with her to one in 2009. I’ve always loved dressing up in costumes, so costuming at a convention sounded like a lot of fun! It ended up being an okay experience – I hadn’t really watched anime in years, so I felt a bit out of place, haha. I didn’t attend another convention until 2011, and that convention was DragonCon. My boyfriend and I randomly decided to go with some friends, and it was probably the best decision of my life. I’ve been hooked on cosplaying and con-going ever since.

I always put a lot of effort into making costumes for Halloween and theme parties during college. Most of those costumes consisted of throwing together thrift store finds and a bit of poorly done hand-sewing. I received a sewing machine for my birthday in 2011, and I finally put it to use in prepping for DragonCon that year. Costuming has led me to learning many new types of crafts, from sewing to wig styling to leather work to making armor. Each and every costume I’ve made has taught me a new skill, and there is still so much more to learn!

Probably Squirrel Girl. Making the costume was a bit of a challenge (particularly figuring out how to make the harness for the giant tail), and it’s always a lot of fun to wear. She’s a unique character and a lot of people really love her, so she typically gets pretty good response at conventions. I also quite enjoy cosplaying as She-Hulk, because being green is fun! It’s so crazy to look in the mirror or see pictures of yourself and think, “Is that really me?!”

You know, it’s hard to say. My dream costume was always a flightsuit from the re-imagined Battlestar Galactica, but I was fortunate enough to get my hands on one a few years ago. The biggest builds on my to-do list are probably Boussh, from Star Wars, and some TRON costumes, though my most anticipated cosplay would probably be Leeloo from The Fifth Element. I’ve been wanting to cosplay her for years (I’m not counting the horrible Halloween costume I made in college, haha) and I actually have almost everything I need for her costume, but I’m waiting to reach a certain level of fitness before I finally cosplay her. So, I guess if I had unlimited time, I’d probably spend it all at the gym, haha.

Unfortunately, not right now. But I’d really, really like to. I hope to eventually join the Rebel Legion and 501st, partially so I can participate in charity events. I just need to get around to making some Star Wars costumes, so that can actually happen! I’d also really like to see a superhero charity group get started in the Nashville area, as that’s something else I’d love to be a part of.

Nope! Which makes me feel kind of lame, haha. Once I get more experience under my belt, I’d love to start offering commissions.

Dragon Con, most definitely. It’s a giant costume party. What’s not to love? I mean, aside from the crowds and waiting for elevators, haha. It’s the thing I look forward to the most the entire year…and now it’s almost here and I’m currently in panic mode trying to get all my costumes done! 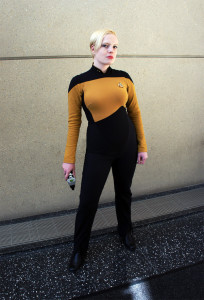 IT’S A TRAP! Seriously, though, once you start, you’ll never want to stop! Cosplay can be time-consuming, expensive, stressful, and, especially as of late, drama-filled – but the fun and high I get from wearing an awesome costume and hanging out with friends outweighs those things for me. I think it’s definitely something that requires a good bit of patience. A costume can be as simple and easy as you want it to be, but if you’re a perfectionist like me, you can spend countless hours working on your costume – researching details, searching for the perfect fabric, cutting out patterns, making mockups, spending hours trying to find a particular costume accessory, learning new skills, making mistakes and having to start over…it’ll suck up a good amount of time before you even realize it! But the end result is always worth it to me. If you’re wanting to start cosplaying, do it! Start small if you need to, and learn new skills as you can! There are tons of tutorials out there and lots of people willing to give advice.

The drama and the bullying. I’ve not really experienced much of it myself, but it seems like I see rude comments on photos every day, and there’s always some new controversy popping up. While it’s great that cosplay is growing in popularity, it’s also becoming a lot more mainstream and that brings problems with it. I mean, it’s one thing for Joe Blow to make inappropriate comments on Facebook, but when a major news site is comparing cosplayers and asking who wore it better? That’s utterly ridiculous, and despicable. I do take my costuming seriously, but when it comes down to it, cosplay truly is about having fun. 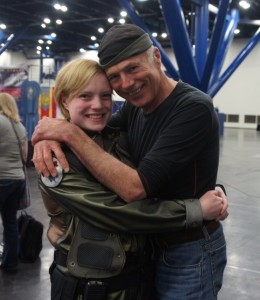 Oh, geez. I really don’t know! Because of cosplay and con-going I’ve got to meet, socialize, and even party with several Battlestar Galactica cast members, which is pretty neat. Really, though, my whole cosplay experience has been super meaningful to me. Any time someone gets excited or compliments my costume, it’s an amazing feeling. Getting to meet and befriend so many cool, like-minded people is awesome. I’m so glad I got involved with this community!

Cosplay has changed my life. You wouldn’t think dressing up in costumes and going to cons would do that, but it really has. I’ve found something I’m truly passionate about, something that fulfills my desire to create. I’ve met tons of people and made a lot of friends, not just locally, but around the country and even around the world. And though you definitely shouldn’t feel like you can’t cosplay certain characters because of your body type, cosplay has, for me, given me extra motivation to get into better shape and to get healthier. I may spend too much time and money on cosplay, and it may stress me out sometimes, but as I said before, all of this is outweighed by the joy I get from cosplaying and attending cons.

If you’ll be at Dragon Con, keep an eye out for Meg in that awesome flight suit…perhaps some of the other costumes pictured…and apparently some new ones as well! You can also find her on Facebook, Twitter, Tumblr, and Instagram.