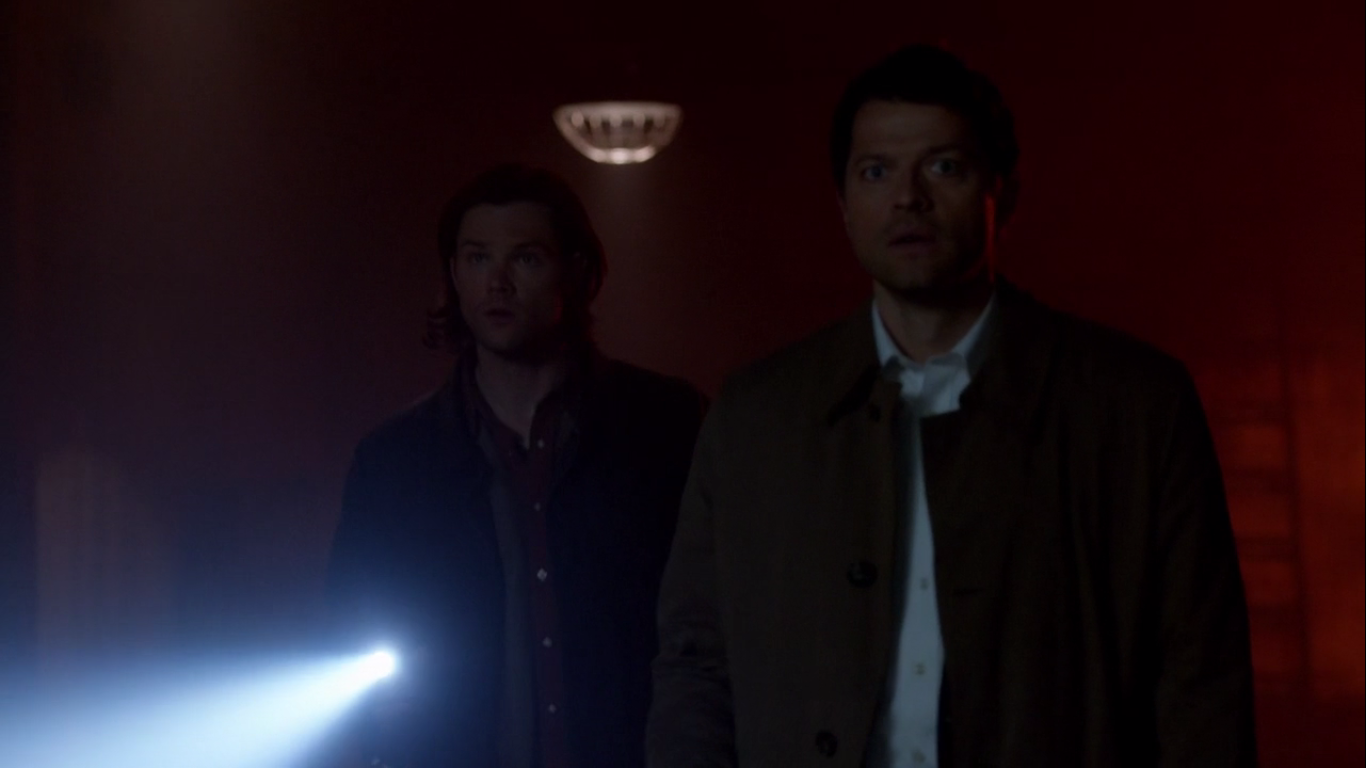 This episode seemed to be a litmus test for fans.  If you enjoy the angels and Castiel, you most likely enjoyed the episode.  If you hate Castiel and the angel plot, you were probably extremely angry by it all and (if the mentions to the writers on Twitter are any indication) probably swearing off the show for good.  I’ve never really hidden the fact that I’m a big fan of what Castiel brings to the show, so I hope my generally glowing review of this episode doesn’t come as a complete surprise to you.  If it does, sorry to disappoint.  I like Castiel so I’m overall pretty happy with what this episode brought to the table.  I didn’t enjoy everything in this episode, though.  In fact, pretty much everything having to do with Tessa angered me beyond reason.  If they hadn’t included her and had assigned that role to some random angel instead, this episode might have actually been perfect to me.   I love Tessa as a character so it’s incredibly unfortunate that they had to treat her like this within the narrative and use her to continue the baffling changes to Reaper mythology. 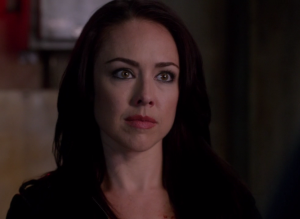 The biggest thing about Tessa that bothered me was the destruction of Reaper lore.  Back in 9×3 ‘I’m No Angel’ we learned that reapers are just another kind of angel.  This was a pretty big blow to reaper and angel lore, but after a few weeks I moved on and decided it was workable.  Ok, so reapers have to take a vessel to be seen by the living?  It’s weird, but I can deal with that.  Now this week we have Tessa, looking the exact same way that she did in previous episodes.  We know this isn’t a vessel because it’s the face of the hospital patient back in the season one finale.  So how was Tessa visible? I have absolutely no idea.  The narrative doesn’t bother trying to explain it either and just kind of hopes we’ll accept it without question.  I know the show has been going for nine seasons, but completely changing the lore of a recurring species on the show for seemingly no reason is pretty frustrating.

The second thing that bothered me about her story was that we were subjected to yet another death of a recurring female character.  We have such a small number of women that it’s extremely disappointing when one of them is brought back just to be killed.  We are now left with Jody, who will hopefully return next season, and Charlie, who was last seen skipping off to Oz with Dorothy.  It’s possible that they could bring back Mrs Tran, but with her son dead I’m not sure if she’d fit into the narrative.  Krissy is possibility too, though she’s been gone for over a season.  Now that Hannah has been in multiple episodes, I suppose you can consider her “recurring,” but she walked off at the end of this episode so who knows if we’ll ever see her again.  The reality is we only have two recurring female characters with strong possibilities of returning and three with giant question marks over their heads.  If you want to find any other recurring female characters you’d have to dig back many many seasons to find one that’s still alive.  Meanwhile the list of male characters recurring is pretty long.  Besides Sam, Dean, and Castiel we have Gadreel, Metatron, Crowley, Death, Cain, Harry, Ed, and Garth.  And that’s really just focusing on this season.  If you stretch it back to last season, as I did with the female characters that I listed, there are even more.  I’m not even including Gabriel, Kevin, or Bobby, even though they’ve all shown up again after their deaths.  It’s a pretty unbalanced list, obviously, so killing a recurring female character is heartbreaking. 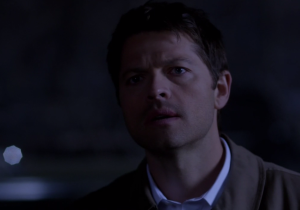 Outside of Tessa, though, I feel like this episode was pitch perfect.  The writer of the episode, Andrew Dabb, has proven that he really understands Castiel as a character.  Though Castiel now has an encyclopedic knowledge of pop culture references, he’s still awkward about it.  I laughed pretty hard at him choosing Spears and Aguilera as Sam and Dean’s aliases.  He caught on that they used popular musicians, but sort of missed the mark.  He also didn’t catch on the wordplay for the riddle until Sam stepped in with the answer.  He gets things like Lord of the Rings, but he’s still awkward and lovable.  Castiel doesn’t quite know how to put these references into something more socially relevant.  I wouldn’t have it any other way, honestly.  I love Castiel just the way that he is.  I’ve heard from some people within the autistic community say that they can see a bit of themselves in Castiel with these traits.  As I am neither autistic myself nor a Doctor who is able to diagnose someone, I’m hesitant to place that label on him, but I’m happy for those within the community that are able to identify with him on this level.  There’s so much negative representation and misuse of the “autistic” label in media that if people want to take these traits and feel represented by Castiel, that’s something to celebrate.

I think the best part about this character trait is that Sam and Dean still accept him for who he is, despite his awkwardness.  They even seem to find that trait rather endearing, just like the fans do.  Sure, Dean often rolls his eyes when Castiel displays a lack of understanding over human interaction, but Dean rolls his eyes enough at his brother for me to accept it as a gesture of amusement rather than genuine frustration or rejection of Castiel’s quirks.   When Dean refers to him as “weird,” there’s no malice in his tone.  It read to me as a fond ribbing towards his quirks and not an insult.  The only time in this episode when Dean seemed to be genuinely upset with Castiel was when he was reminded of the last time Cas had an army of followers.  His outrage was understandable here for two reasons.  First, he has a point that the last time Cas went down this road things did not go well.  Second, Dean is being heavily influenced by the Mark of Cain, so his anger is ramped up higher than ever before.  At no point was Castiel’s quirkiness ever the cause of Dean’s anger.  The episode even ends with Dean offering words of encouragement to Castiel and indicating that the three of them together will make a strong unit in their fight against Metatron. 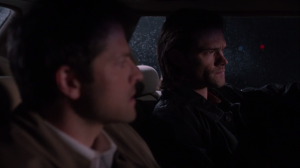 While Dean and Cas’s interaction this episode was pretty minimal, we did get to see a lot of Sam and Castiel.  These two characters don’t usually get much screen time together, probably due to the fact that both Jared Padalecki and Misha Collins are massive pranksters and putting them in a scene together tends to slow down production.  They clearly managed to cool down the pranks long enough to allow their characters to interact in this episode.  Sam seems even more patient with Castiel’s awkward traits than Dean is.  He even sticks up for him when Dean gets a little too frustrated.  We see this happen in this episode when Dean expresses outrage over his ‘cult’ and Sam encourages them to go somewhere more private to discuss it further.  They also share a strong bond over their love for Dean.  When they’re riding in the car alone together, their conversation naturally flows to Dean and their concern over the Mark.  Sam is honest about his feelings towards his cult and Castiel listens to him.  Their friendship is a special one and I’m glad to get a more intimate look at it during this episode.

As for the plot of the episode, I thought it was pretty well done, especially after initial concerns that a lot of people had after watching the preview.  Many fans were worried the “Cult of Castiel” would be a sharp criticism of Cas fans, but I feel like that wasn’t really the case here.  The angels who were committing suicide bombings on other angels turned out to actually be acting on Metatron’s orders.  To borrow a term from social media, they were essentially Metatrons “sock puppets.”  They were fake Castiel followers doing outrageous things in his name so that Metatron could smear Castiel.  As for the rest of Castiel’s “cult,” they weren’t very big fans of Sam or Dean and ditched Cas when he refused to let them punish Dean for Tessa’s death.  I don’t know about you, but I’d never abandon Castiel for sticking up for the Winchesters.  It’s one of my favorite things about Castiel, so if this was supposed to be commentary on Cas fans, it’s certainly not about my corner of fandom.  I’m very pro-Team Free Will and it’s clear that his followers were extremely anti-Winchester.   Despite what some vocal fans claim, being pro-Castiel does not mean one has to be anti-Winchester. 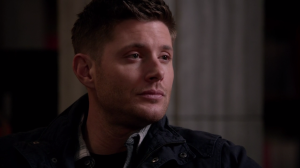 Now that he’s given up his army, I can rest a little easier. As Dean mentioned, he’s been down this road before and it did not turn out well.  Now he’s backed out and I don’t have to worry that his role as ‘leader’ could be a repeat of season 6.  It’s over.  It’s done with.  We can move on now.  The fact that Castiel is with the Winchesters now also means that the finale should be filled with the Team Free Will that’s been absent for much of the season.  Castiel has been largely separated from the Winchesters, but now they’ve been reunited.  They’re working for the same cause now.  Sam and Castiel are both concerned about Dean’s well being due to the Mark of Cain and all three are concerned about Metatron’s plans.  Castiel asked if Dean believes the three of them will be enough.  Dean responds ‘we always have been.’  Even though this season has pushed a wedge between the brothers and placed Castiel on his own path, it’s pretty clear that they’re a united front heading into the final boss battle with Metatron next week.  Team Free Will is together again and Metatron should be scared.  This is the group that stopped the apocalypse, after all.

The finale is less than a week away.  Time to start preparing yourself for emotional devastation.  Go out and get your vice of choice.  Get some tissues handy.   I know the finale will destroy me in some way.  It always does.  This is Supernatural, after all.  Devastation is the name of the game here.  But thankfully it doesn’t look like I’ll be devastated because of a lack of Team Free Will interaction.  But how will it destroy us?  Will they kill off one of our three leads again?  That’s a little played out, but maybe they’ll put a twist on it.  Will Dean be the one to kill either Sam or Cas?  Will one of them be forced to kill Dean to prevent him from doing something horrible?  That would mix it up a bit from the usual character death that marks Supernatural finales.  Or maybe all three will survive, but we’ll crushed in some other way.  So many heartbreaking possibilities.  Brace yourselves as we head into the finale.

Previous:Bleach x 580 Review: The Light
Next: Supernatural news from the CW Upfronts