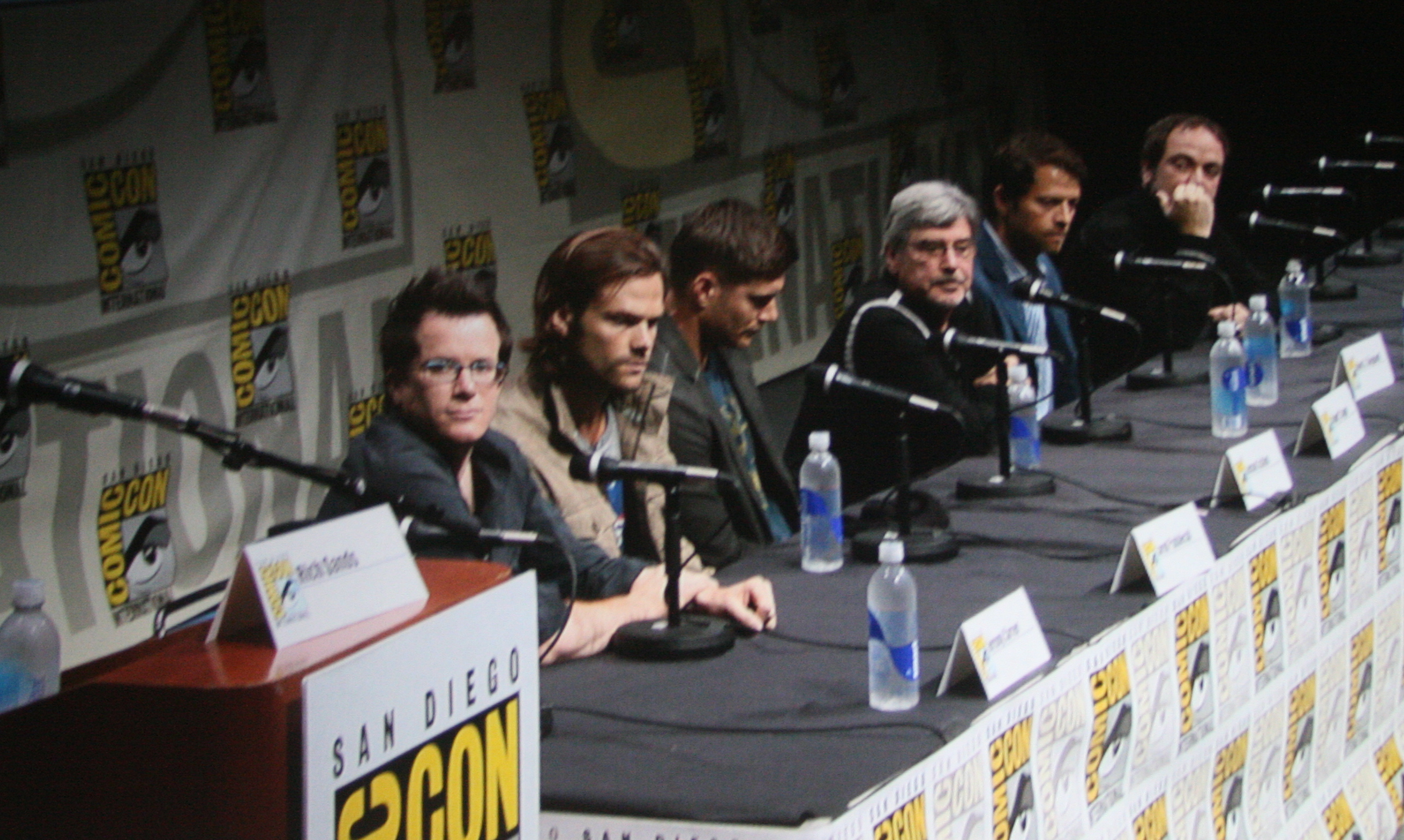 Supernatural is one of those weird happenstances where a show is made for a mainstream audience, and then inexplicably gains an intense fandom presence. It can be jarring to realize that the fans as a collective put way more thought and effort into analyzing the characters, storylines, and themes than the showrunners do into writing them. Nowhere is this more apparent than during major interviews for mainstream audiences. And like it or not, compared to the much smaller and more fandom-specific Supernatural conventions, Comic Con is both major and mainstream. So it comes as little surprise that during the Sunday Hall H panel featuring Jeremy Carver (showrunner), Jensen Ackles (Dean Winchester), Jared Padalecki (Sam Winchester), Robert Singer (writer), Misha Collins (Castiel), and Mark Sheppard (Crowley), they all (for the most part) played it incredibly safe. 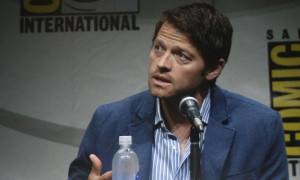 So many of the initial questions and answers were scripted to within an inch of their lives, and noticeably stale. Oh really? Dean’s motivations are the fight, Sam, family, the car, rock n’ roll, and pie? Sam tries to do what he thinks is right but doesn’t always succeed? Sam has finally accepted that his life will never be normal? So much of what they talked about surrounding Sam and Dean’s characterization wouldn’t have been out of place four or five seasons ago. Even the hints about next season were canned and so vague that they might as well not have bothered. We’re going to explore the implications of what happened to Crowley and Cas in the finale? Geez, I friggin’ hope so!

Furthermore, some quotes seemed almost deliberately designed to enrage fans. Misha Collins referred to Castiel as having been a “useful tool” back when he had his powers, but “now he can pop in and fold laundry.” As endearing as that image is, it’s a sore point with many Cas fans that he’s often been treated as more of a tool than a person.

But there were moments where the inherent playfulness of the cast showed through the nervous energy of the panel. Collins kept knocking Sheppard’s name plaque off the table and onto the floor, forcing Sheppard to pause the panel as he walked around the table to retrieve it. While the audience laughed, Jared deadpanned, “This is a day on set. This is how it always is.” And when Collins was asked if Castiel would ever get to drive Dean’s beloved Impala, Ackles immediately interrupted, “No.” Collins, “Yes.” Ackles, “No.” And so on. One of the sweetest moments was a heartfelt compliment from Ackles to Padalecki on the subject of Sam’s character changing more abruptly, profoundly, and often than Dean’s: “[The writers] keep throwing him curveballs and he keeps pulling them to the fence.”

By far the best-received part of the panel came when Singer was asked about the character of Charlie Bradbury. He began insulting Felicia Day so unironically that the audience was beginning to mutter uncomfortably, until Day herself appeared on stage to confront him. “A cosplay Deadpool is going to take you out in the bathroom later,” she promised Singer. Day commands such respect in geek circles that, even in that room full of Supernatural fans, I have no doubt that the crowd would have torn Singer limb from limb if she had so decreed. 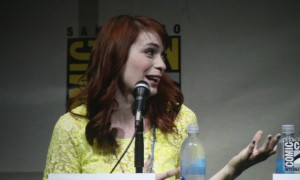 The panel soon confirmed what Day’s presence had already suggested: that Charlie Bradbury would be returning as a guest star for another season. “Big plans for Charlie,” were the exact, thrilling words. I get the impression that the showrunners understand what an important character they have created in Charlie, and that they are eager to keep utilizing her. I only hope that they keep up their track record of putting her only in awesome episodes.

And despite my lip service to the vagueness of the season 9 spoilers, we actually did get a few interesting chunks of information. Carver kept referring to the world after the falling of the angels as a “free-for-all,” so we know that the angels will not present a united front – they will be scattered into factions and/or individuals, and the world will be the more chaotic for it. And, of course, we got the sneak peek of the first episode of next season. It depicted Dean and Sam returning to the Men of Letters bunker with a captive Crowley, finding Kevin there holding down the fort. Crowley appears to have gotten over whatever brief flash of humanity he showed in last season’s finale, but Sam seems to think that he can reach that part of him again, and Sheppard himself promises that “whatever happened to Crowley at the end of season 8 has had a profound effect on him whether he likes it or not.” The sneak peek ended with the Winchesters placing Crowley in solitary confinement, describing it as “his own personal Hell.”

One of the more interesting questions from the audience was regarding directing. Jensen Ackles has directed episodes in the past, though there are no current plans for him to do so in season 9 (a new baby might have something to do with that). Similarly, Jared Padalecki doesn’t think directing is right for him since he doesn’t get to spend enough time with his family as it is. Misha Collins is set to direct the seventeenth episode of the season; he apologized in advance for the product. As for Mark Sheppard, he simply grumped, “They never let me do anything.”

And then, as if to apologize for the slight awkwardness of the panel, they showed us what was simply the funniest and most satisfying gag reel in recent memory. It started with Ackles slipping and faceplanting during the heroic charge at the end of the episode “LARP and the Real Girl.” Then the show was thoroughly stolen by intermittent outtakes from the crypt scene in “Goodbye Stranger,” with Dean telling Cas straight-faced, “I need you… you’re my baby-daddy,” and the two of them professing their love for each other. It’s unfortunate that we had to hear them say the words in a gag reel before we heard them on the actual show (because the words do apply whether you think Dean and Cas’s relationship is romantic or platonic), but it got an uproarious response from the crowd anyway.

(Despite the convention staff begging us to the contrary, I understand that the gag reel has already been leaked to the wilds of the Internet. Make of that what you will.)

Whatever the panel’s faults, it also had great high points and was a fun chance to see the whole gang on stage together. Here’s hoping that Carver’s “free-for-all” season 9 turns out to be as “interesting” as he promises.

Previous:Geek and Sundry: the best-kept secret at ComicCon
Next: MonsterCon: The Little Convention That Could