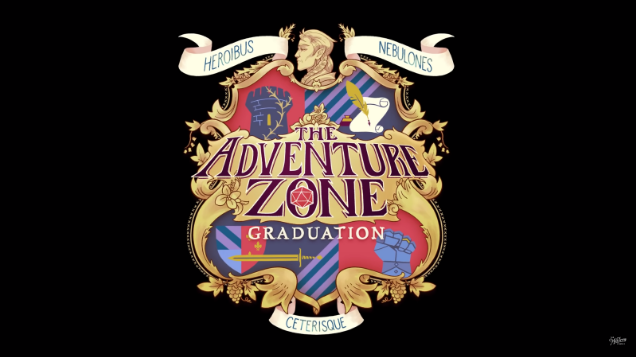 The third episode of The Adventure Zone: Graduation, “Pursued By Bear”, comes out a week off-schedule thanks to Thanksgiving weekend in the US, but it was worth the wait. Fitzroy’s familiar is now something of a manservant crab named Snippers, the firbolg learns about entrepreneurship and refuses to lie, and Argo eats some bread. What more can you ask for?

Since “Pursued by Bear” was more combat-heavy than the last episode, there’s less for me to talk about in this review. I don’t want to write a play-by-play, you don’t want to read it, and my editor won’t want to edit it. That said, I did enjoy the combat (and once laughed so hard I got dizzy — thanks, Travis) and what worldbuilding was available was a fun listen.

The moral of this episode is basically teamwork makes the dream work. As the three roommates face a test together, they all tried to pass it independently of each other. Their teacher tells them they have to work together especially if they’re not playing to their strengths (since the firbolg won’t lie and Fitzroy wouldn’t use his Noble background to gain entrance to a castle).

I still enjoy the skeletons that work for the school. The boys fight them as part of a class/leveling up activity, and the skeletons (Victoria, Germane, and Rattles) offer compliments as their bones shatter. It’s a fun game for them, with Germane yelling, “Good job!” as his skull flies across the room.

After Griffin needles Travis’s encounter building by asking, “Does anyone else feel particularly educationally enriched?” a bear appears, and this is the first time we get to see Fitzroy do what Barbarians do: rage.

I’ve seen some discussion online about what it would look like when Fitzroy eventually rages, since he’s a special kind of sorcerer/barbarian combination and also a pretty small half-elf. We were expecting him to lose control of his emotions and possibly his magic; what I don’t think we were expecting was him to just lose his temper and throw Snippers the Magic Crab right at the bear’s face. I wasn’t expecting it, but I loved it, and I can’t wait to see the fan art of it.

One thing I’ve always been impressed by is the inclusiveness of The Adventure Zone campaigns. The boys are willing to listen to feedback and show characters with different gender identities and sexual orientations in their stories; during TAZ Amnesty, Travis played a bisexual woman named Aubrey, and this season has already had multiple characters who use they/them pronouns, with Dakota the Social Skills teacher just being the most recent:

Ranier Michelle is another recurring NPC who’s captured my heart in every episode she’s been in — all of them so far. She lives with a chronic illness that makes it difficult for her to walk around, and instead of using magic to simply handwave chronic illnesses away (like another famous magical school), Rainer has a magical wheelchair and small reanimated squirrel skeleton that she uses as something of a service animal.

According to Travis, Rainer is completely based on Rachel Miner, an actress and disability advocate who was diagnosed with multiple sclerosis in 2010. Rachel is super excited about what I can’t help but call her TAZ-sona, sharing some of Travis’ tweets in relation to the new season:

100% the coolest thing!! I dreamt last night that I had a cartoon pic of this character in an Adventure Zone book that I was showing people. This season is going to be so amazing!! #TheZoneCast Graduation Episode 1, “Orientation” is OUT NOW! xhttps://t.co/VBlxlkAgWf https://t.co/iVnjmnMWeq

I don’t have the words to describe… this is magic, this how wonderful hearts change worlds for the better…you certainly made mine much brighter my friend ✨ https://t.co/UkjrHUHtzj

What did you think of “Pursued By Bear”? Was it worth the wait? Who’s your favorite NPC so far?