Everyone Read “The Geek Feminist Revolution” 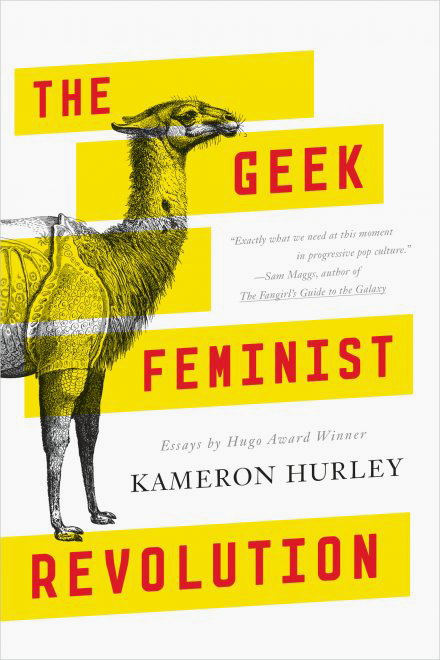 When I say that everybody needs to read a certain book, I usually don’t actually mean “everybody”. This time, however, I am totally, absolutely serious. Everyone needs to read The Geek Feminist Revolution.

I am a geek, and I am a feminist, and by the very nature of the title, that means The Geek Feminist Revolution is meant for me. And while that may be true, when I say that everyone should read it, I’m not kidding. Yes, it speaks to me as a geek and a feminist, but what author Kameron Hurley is attempting to do is change people’s beliefs. She states her goal very simply; she wants to change the world. I’m sure there are people out there who will avoid it solely because of the title, and those are, sadly, the very people who should be reading this book.

A collection of essays by award-winning sci-fi author Kameron Hurley, The Geek Feminist Revolution touches on a variety of topics, from writing advice to the casual misogyny of Die Hard to white people facing their own privilege to the notion of “other” and erasing those people from history. Each essay takes an honest, brutal look at the world in which we live (or at least the United States), examining how media and popular culture plays an important role in forming our opinions, and how it’s vital that it contain voices other than male, white, and straight.

Hurley, in addition to throwing down several dozen truth bombs, also acknowledges that she herself has reaped the reward of privilege just by being born white. She has struggled, and while her struggles don’t compare with the struggles of others, it doesn’t invalidate them, either. Her advice comes from experience. There are essays about the feminism of Mad Max: Fury Road and examinations about Twitter discourse and online bullying, but there are also personal reflections on her battle with chronic illness and emotionally manipulative ex-boyfriends.

Some may have concern that while “feminist” is in the title, it’s not intersectional feminism, as Hurley is white. And I’ll admit that, being white myself, I may not notice its absence. However, while Hurley obviously hasn’t experienced the things non-white women face, she does acknowledge that her life has been affected by being white. She talks about the importance of definitively stating the race of characters, as “colorblind” writing is ineffective when most people will assume the character is white be default. She also talks about living in South Africa and how that made her more aware of the racial inequality in the United States.

For quite a few people, the epiphanies contained in this book may not be new to you, but I know that I sure as hell feel a lot better when I see statements like this in a book rather than seemingly empty ranting on a Tumblr blog. For all that blogging is a completely valid way to make yourself heard, there is still a certain gravity behind traditionally published works that blogging won’t achieve for a while. Books can (not always) offer more weight to the opinion.

So go and read The Geek Feminist Revolution and add your voice to the cause. If you’re already speaking out, keep doing so. We have always been here, and we are not going anywhere.

The Geek Feminist Revolution by Kameron Hurley is published by Tor Books and is currently available wherever books are sold.

Previous:The X-Men Enter Civil War II with their Own Mini-Series