Roses and Rot: Intrigue and Rambling 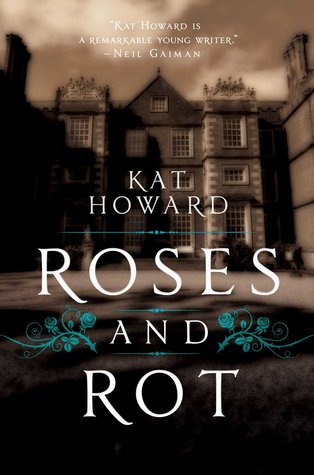 It’s funny that when checking out other reviews for Roses and Rot by Kat Howard (before cracking it open myself), one person said “this book is actually a romance novel” – because that isn’t the impression I got at all. Yes, there are romantic aspects to it, but above all Roses and Rot is a Tale of Two Sisters, if you will.

Additionally, Roses and Rot is not a fairy tale, but a faerie tale. I don’t want to say too much more about that and give away anything plot-specific, but it is important to note, as I’ve seen other complaints around the internet that it’s not the fairy tale people expected. Granted, the blurb uses the term “fairy tale”, but to be honest, I do think part of the problem with the fairy vs. faerie tale “issue” (which to me is minor at best but is apparently very bothersome to others) is the fact that the blurb itself doesn’t really sell the book like it should.

A prestigious artists’ retreat holds dark secrets as desire for art and love are within grasp for Imogen and for her sister, Marin, but at a terrible price.

What would you sacrifice in the name of success?

Imogen has grown up reading fairy tales about mothers who die and make way for cruel stepmothers. As a child, Imogen used to lie in bed, wishing her own mother would die, because she couldn’t imagine how a stepmother might be worse. As adults, Imogen and Marin have more or less escaped their mother – Imogen as a writer and Marin as a dancer – and they’re both accepted to an elite postgrad arts program at Melete. Imogen might be living in a fairy tale after all, and it’s one that will pit her against her sister if she really wants to escape her past.

So first things first, if you know anything about faeries (even just some of the basics), a lot of Roses and Rot will be predictable, and yet the author threw in enough of her own touches that the whole faerie plot was never boring. As my article title says, the novel was definitely intriguing, and the biggest issue with that intrigue is how many unanswered questions remained at the end – despite it not really seeming as if Ms. Howard was setting things up for a sequel.

Unfortunately, as the other part of my title says, Roses and Rot is very rambling. At just over 300 pages, I think that at least 1/6 of the length could have been cut to make a cleaner novel that would simply be more fun to read. At times I wanted to finish reading it because I wanted to see what happened, but more than once I was definitely on the “wanting to finish because this section is so darn boring when will it be over ugh” side of the spectrum. Some of this had to do with the bits of actual “fairy tale” writing that popped up throughout the novel; they jarred me out of the story and while I believe they were supposed to be full of symbolism, mostly they just seemed out of place and often repetitive. A lot of this has to do with the author’s writing style; she is repetitive, and the constant use of words/phrases like “Except” and “Until then. Until then.” as sentences all their own was more than a little taxing by the end.

Other than those minor complaints, though, I will say that Howard has a gift with words. Her writing was often beautiful, and many times it truly drew me into her world. Some more decisive editing could have fixed a lot of the aforementioned issues; regardless, I would not hesitate to pick up another book by her in the future.

In terms of characters, there were a couple who were just too villainous for words and therefore completely uninteresting in their own right. And while the two main characters, the sisters Imogen and Marin, were certainly flawed, they also didn’t really draw me in. I felt more for those characters who would be considered secondary (if not tertiary) – Imogen and Marin’s housemates Helena and Ariel (especially Ariel – I would love to learn/read more about her!), Marin’s mentor Gavin, and even some of the random background characters who show up two or three-ish times throughout Roses and Rot. Howard clearly has a gift with peopling her novels, so it’s unfortunate that this gift didn’t quite extend to her main characters.

Overall, if you are into reading about the Fae/faeries, or if you like stories that have a bit of romance but are really more about friendships and family than relationships, or if you just want to read some gorgeous writing and believe you can get over/ignore the issues I mentioned, I do suggest reading Roses and Rot. It’s available now on Amazon from Saga Press.