“The Hunt” Film Release Postponed After Criticism From President Trump!

Some people in the United States seem to be doing anything possible to fight gun violence as long as it doesn’t involve better laws around the availability of guns. Universal has decided to cancel (or at least, postpone) the release of The Hunt in which the wealthy hunt people for sport. With such a movie not being shown in cinemas (for now), we can all breathe a sigh of relief because actual gun violence has been solved. Yay!

The Hunt is a horror-satire Blumhouse film which was set to debut on September 27, 2019. It is based on Richard Connell’s 1924 short story titled The Most Dangerous Game.

According to the studio:

While Universal Pictures had already paused the marketing campaign for The Hunt, after thoughtful consideration, the studio has decided to cancel our plans to release the film … We stand by our filmmakers and will continue to distribute films in partnership with bold and visionary creators, like those associated with this satirical social thriller, but we understand that now is not the right time to release this film.

Even though a trailer was released about a week ago, any further promotional push was halted due to the recent shootings.

Here’s the synopsis for The Hunt:

In the shadow of a dark internet conspiracy theory, a bunch of elites gathers for the very first time at a remote Manor House to hunt humans for sport. But the elites’ master plan is about to be derailed because one of the hunted, Crystal (Betty Gilpin), knows The Hunters’ game better than they do. She turns the tables on the killers, picking them off, one by one, as she makes her way toward the mysterious woman (two-time Oscar® winner Hilary Swank) at the center of it all.

President Donald Trump took to Twitter to basically say Hollywood was inciting violence and how certain movies are to be blamed for gun violence instead of you know, actual guns and the laws surrounding them. 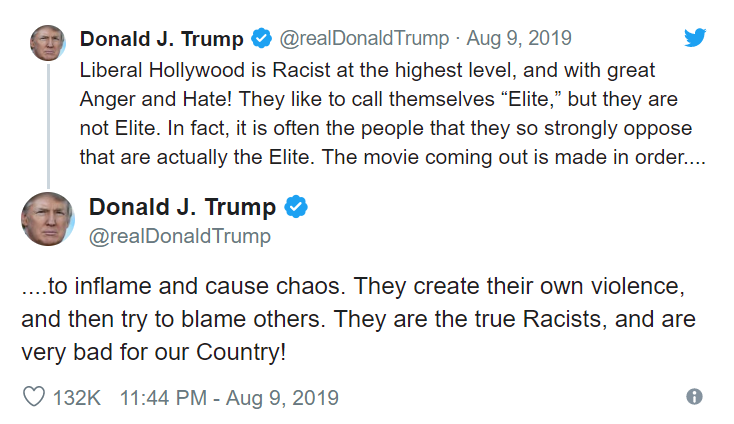 Other President Trump supporters have been talking against Hollywood for a while now.

Zachery Ty Bryan, a guest at Fox and Friends said, “At the end of the day, [the elites] look at us as deplorables … They look at us as racists and bigoted evil people. When you can dehumanize a side or a group that supports Trump in this case…you can do anything, so why not hunt them like you would animals?”

When certain individuals and content in media continue to attack the queer community, immigrants, particular religions, mental illness, etc. and are known to entice actual violence against minorities, their words are protected under the “Freedom of Speech” argument. However, when films like The Hunt are created (even just for satire), they are instantly branded as the real cause of violence (without any proof) to try and distract from the real perpetrators.

I can kind of understand Universal’s decision. But it won’t do anything. It’s just another example of people blaming video games, films, queer culture, lack of faith, and a whole lot of other stuff instead of coming together to talk about sensible gun laws to protect human life.

Here’s to hoping The Hunt ends up getting released later this year, even if it’s on Netflix.