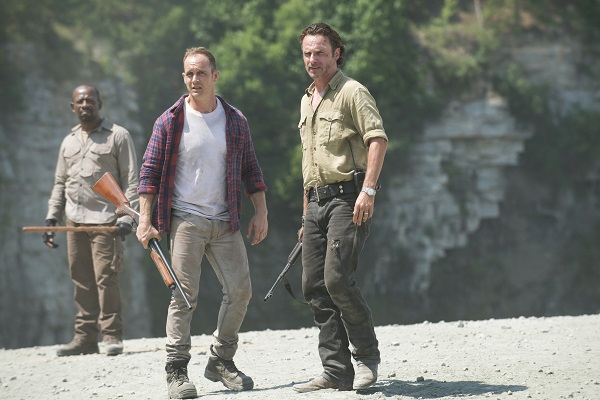 The sixth season of Walking Dead started with one hell of a bang, though to be honest at first I was in Tyreese mode – that is, asking myself “Where are they and what’s going on?”

Viewers were really thrown into this season premiere, immediately seeing the ‘new’ threat (which came in the form of a quarry full of zombies) and also having to deal with the switching back and forth between black and white and color. 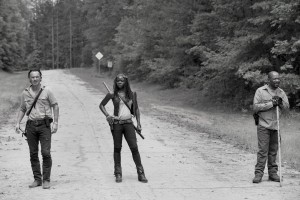 I’ll get this out of the way first – I could have liked the fact that the flashback scenes were shown in black and white if there hadn’t been so many of them, and if they hadn’t been so badly spliced with what we were being shown from the current timeline. Namely, the times when there were extremely long black-and-white segments followed by mere snippets of the present in ‘living color’ (pun intended).

Now that I’ve gotten that out of the way, I have to say that my favorite part of this episode was Heath showing up. He’s one of those comic book characters they could have easily ignored, but instead they gave him an introduction on par with that of Abraham, Rosita, and Eugene in season four. I’m already excited to see where they’ll take this character. 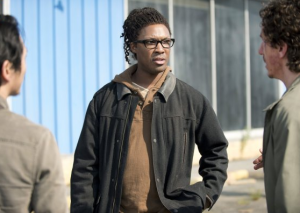 A lot of the members of the group were absent for the better part of this episode – namely Maggie, Carl, and even Carol. On top of that, while we saw Daryl here and there, most of the time he was just riding along on his motorcycle. Of course this is what happens as the cast grows again – less screen time for our favorites (or maybe just ‘the usuals’; I feel like being okay with Carl puts me in the minority) – but let’s be honest, these Alexandria people are dropping like flies so there’s a pretty decent chance we’ll go back to seeing more of the long-time characters sooner rather than later.

Thankfully Morgan got quite a bit of screentime. Now that he’s finally with the group, I was wondering if they would sort of shove him in haphazardly and not allow him any influence, but that wasn’t the case at all. I’d like to know more about what happened to him between season three’s “Clear” and his reappearance in season five, but we didn’t get much of his story in “First Time Again”, which was a bit disappointing. At this point I’m just hoping they don’t ignore it from here on out, so I suppose getting bits and pieces of it is better than nothing.

I have to admit that what’s going on with Nick is pretty interesting. The fact that Glenn told Maggie what Nick did, and that Maggie then repeated the story to Tara, but that no one is doing anything about it – and that Nick offered to be part of the team helping with the horde and actually seemed to be doing his job – is quite the turn of events. Are the writers trying to turn this into some sort of positive arc for Nick? If so, I’m honestly not sure how I feel about that, but I guess I’m along for the ride regardless.

It was certainly a bold choice to introduce this huge horde of zombies in the season premiere and to split the episode between flashbacks and a current timeline. Did I love it? Clearly not. But did I hate it? No. In terms of premieres it was overall one of the better episodes, even with the constant back-and-forth. And it definitely had one hell of a cliffhanger. Are the Wolves blowing that horn, or is it someone else, someone new? My guess is the former, but to be honest I wouldn’t be disappointed if they’re adding another ‘bad guy’ to the mix. Hopefully we’ll find out next week!