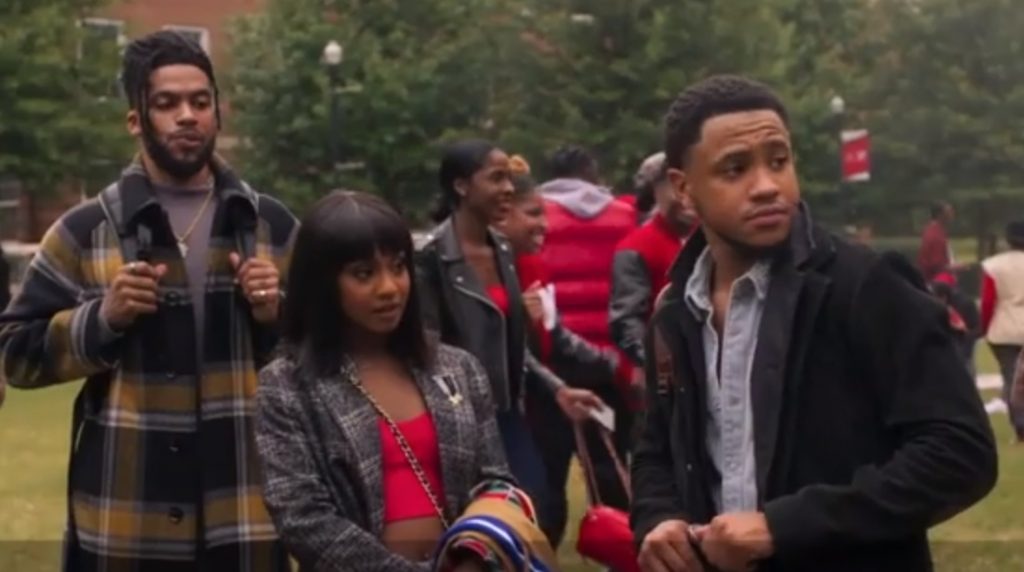 Ari, Simone, and Bryson in ‘There U Go’ (Image: Screengrab)

Boomerang is back for a second season and I’m incredibly happy! I just can’t get enough of this show and the premiere, titled ‘There U Go,’ gave me everything (as well as a couple of surprises) considering where we left the characters during the first season’s finale.

For those of you who don’t know, Simone (Tetona Jackson) and Bryson (Tequan Richmond) broke up during the finale of the first season. If you have been following my reviews, you would know I wasn’t a fan of those two hooking up. I just knew their relationship wasn’t going to last. And sure enough, it didn’t. ‘There U Go’ explored the fallout from their breakup and how it impacted the ex-couple’s mutual group of friends.

The premiere felt very relatable to me. I think a lot of us have found ourselves in a similar situation where we had to balance spending time between two people who broke up (and won’t be in the same room with each other) because you are very good friends with both of them.

Crystal, Ari, Tia, and David creating separate groups chats (one with Simone, the other had Bryson, the third didn’t have both) was amazing to see. Again, once two friends breakup, it can be very tough for the rest of the group to tread carefully while trying their best to not let the group be completely destroyed in the process.

The plot of ‘There U Go’ dealt with our cast of characters attending Homecoming. Seeing Bryson not wanting to give Simone the time of day made sense. She cheated on him and broke his trust. That’s going to take a very long time for Bryson to get over because of how much he loves her. Also, Bryson is a very emotional character. He’s the type of guy who is okay with crying. So, you know he’s still devastated because of what happened.

Will the two get back together even if just as friends? Perhaps. But seeing how things ended between them in this episode, it’s going to be a very messy road to recovery. And I’m here for it.

As for the rest of the characters, Tia (Lala Milan) seems to be doing great. Her dance-off against a group of cheerleaders was hilarious. I liked how the scene addressed the issue of how certain people look down on stripping as a profession.

Crystal (Brittany Inge) is definitely the mom of the group. However, I’m not sure what her narrative arc will be during the second season.

David (RJ Walker) seems ready to understand more about who he is and how he should handle his faith.

I wanted more Ari (Leland B. Martin) in the first season, and maybe I’ll get that in Boomerang season 2? There’s a lot about the experience of a PoC bisexual man that can be explored through such a character.

From what I could tell, the trailer seemed to imply Ari will face the issue of how society’s heteronormativity responds to his bisexuality depending on the partner he’s with. So, let’s see what happens.

The season 2 premiere of Boomerang has me excited to see what the rest of the episodes have in store for viewers!