“Copa 181” Queer Movie Review: An Okay Film that Suffers from an Unfocused Narrative 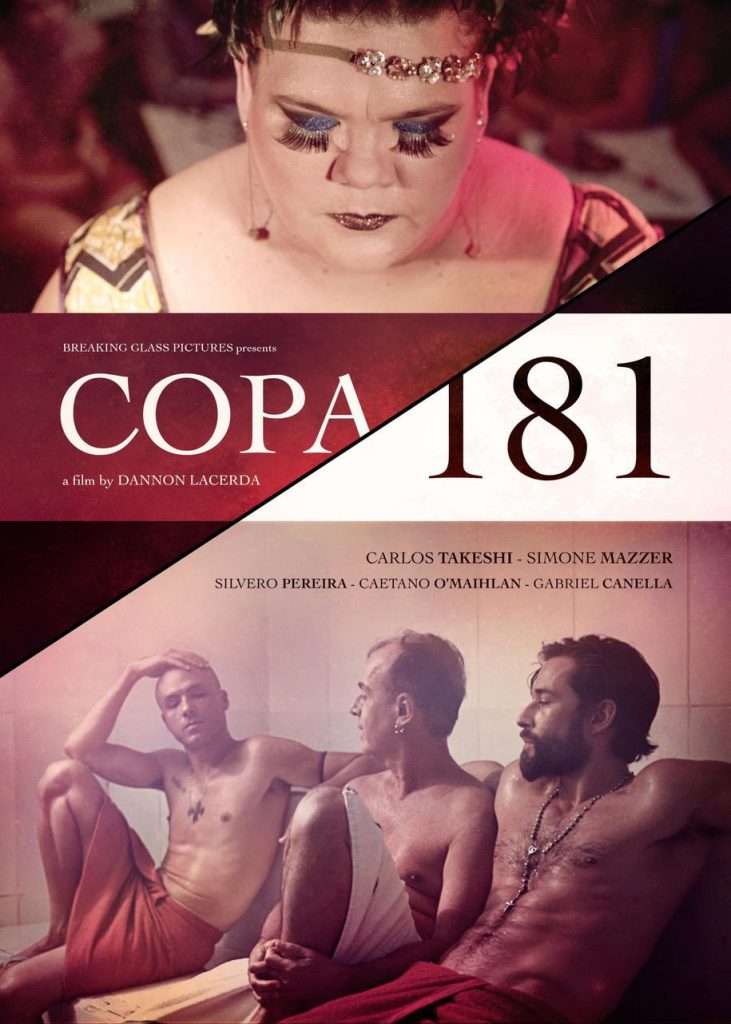 Courtesy of Breaking Glass Pictures, queer Brazilian bathhouse drama Copa 181 is currently available on VOD & DVD in North America. If you are in the mood to watch a foreign queer film this weekend, I say you should consider giving it a chance. It could have been better as far as the narrative is concerned, but certain cast members are very attractive. So at least there’s that.

I was provided a free screener of Copa 181 for review. The opinions I have shared are my own.

Copa 181 is the first feature film from Brazilian director Dannon Lacerda. The movie’s world premiere happened at the Rio de Janeiro International Film Festival, and it went on to have a healthy festival run including the 26th Festival Mix Brasil, Reeling Film Festival, and FICMAI – Festival Internacional de Cine en Maipú, where it won Best Picture.

The film deals with a married couple in Rio de Janeiro who live a very average life. However, things change when the husband, Tana (Carlos Takeshi), begins visiting the queer bathhouse called ‘Copa 181’ without his wife, Eros (Simone Mazzer), knowing about it.

As far as my opinion goes, I would say that Copa 181 is an okay film in the LGBTQ+ cinema list. The biggest issue is the confusing narrative. Apparently, Tana and Eros grow bored with their married life. So, Tana finds excitement in male prostitutes working at ‘Copa 181′ while Eros begins focusing more on her singing career.

Other than Tana and Eros’ relationship, we also get to see the highly problematic dynamic between a hustler named Leo (Caetano O’Maihlan) and a transwoman named Kika (Silvero Pereira), who works at the bathhouse.

Kika ended up being the only character I found myself becoming invested in as the movie progressed. I wouldn’t have minded having the entire film (or more of it) be from her perspective. I liked how she finally realized Leo’s toxic nature and dumped him.

This queer title, in my opinion, tries to do too much without putting enough focus on certain storylines for them to hold any emotional weight. I think ‘Storyline A’ is supposed to be about Tana and Eros, but the movie isn’t able to properly convey that. I would have liked to understand a bit more about their relationship.

The same goes for Leo and his insistence he isn’t gay and that he’s simply hooking up with other men to financially support his wife and kid (kids?). There’s so much to unpack here!

Anyway, Lacerda does give us a glimpse into the lust surrounding bathhouses and how they serve as escapes for many. It also comes across as well-made as far as the visuals are concerned. But again, as I said, the narrative feels unfocused during the more tender moments between the characters. There’s definitely a lot of untapped potential as far as the main and supporting players are concerned. I just wish the overall story had explored them better.

Having said that, if you’re into viewing a steamy and queer Brazilian film this weekend, give Copa 181 a try.

I’m looking forward to seeing what Lacerda does next.

Previous:‘Terminator: Dark Fate’ Projected for Low $28 Million Opening! What Went Wrong?
Next: Netflix “Daybreak” Season 1 Review: They Should Have Focused on Anyone Except Josh