Netflix “Daybreak” Season 1 Review: They Should Have Focused on Anyone Except Josh 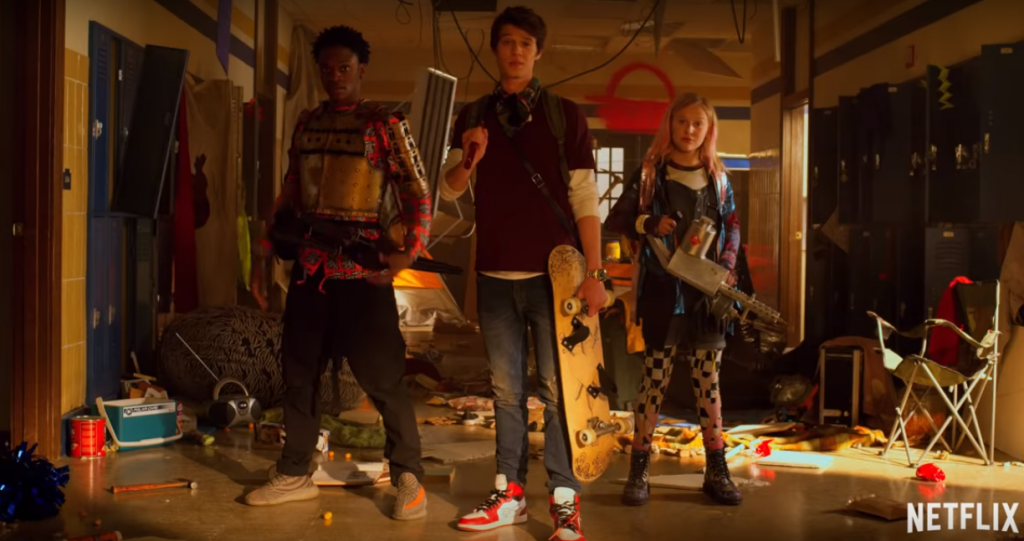 After watching Daybreak on Netflix when it was released on October 24, 2019, it took me this long to finally sit down and write a review. From the messy (not the fun kind) writing to certain uninteresting characters, there’s a whole lot that doesn’t work for Daybreak. And I’m saying this as someone who is still able to sit through episodes of freaking Riverdale on The CW!

Note: Due to having watched this show when it dropped and it being very forgettable, do correct me if I say something that didn’t happen or if I ask a question that was indeed answered in the narrative. Peace!

When fellow editor Jamie covered Daybreak for NYCC 2019, I was looking forward to binge-watching it. The cast and the creators sounded cool. The team bragged about the show not following certain tropes and surprising the audience. And frankly, due to still watching The Walking Dead, I wanted a zombie show I could enjoy. But then, as the premiere unfolded in front of my eyes, I knew Daybreak was something I wouldn’t want back for the second season.

For those who were interested in watching it because of the highly-enjoyable graphic novel it’s based on, don’t! This show simply uses the novel’s title. It can be aptly described as a hodge-podge of various things including Mad Max, Dawn of the Dead, basically every problematic trope from any teen-centric CW show, and especially 2015’s Turbo Kid, complete with the boring male lead of Daybreak wanting to save his girlfriend in a post-apocalyptic world.

The premise has to do with a biological weapon that wiped away almost everyone over the age of 18 from the planet. I would have been okay with that if a majority of the cast didn’t look like they were in their mid-20s or even early 30s. It was very distracting and unrealistic seeing young adults trying to pass as teens in a show where there shouldn’t be any adults.

Anyway, the adults who weren’t disintegrated transformed into zombie-like creatures called ghoulies. Why the show, which is aware of itself, doesn’t call them zombies, I don’t know. Also, where are the babies and children? Why didn’t we get to know more about the mutated animals?

Due to the teens feeling comfortable with high school stereotypes, they split up into different factions. We have the Disciples of Kardashia, the STEM Punks, the Jocks, and more. Our lead is Josh Wheeler (Colin Ford). He’s a transfer kid from Canada and isn’t part of any faction. He’s had wilderness survival training from his father, just so you know.

His main mission is to find (his maybe-girlfriend?) Sam Dean (Sophie Simnett). I wouldn’t be surprised if Josh’s last name ended up being Wheeler because of Stranger Things and Sam Dean is a play on the characters from Supernatural.

We’re introduced to this fictional world through Josh as we follow him around. On his journey, he meets 10-year-old genius and pyromaniac Angelica Green (Alyvia Alyn Lind) and formerly closeted gay jock Wesley Fists (Austin Crute), who has become a pacifist samurai. I know! You can do so much with these characters. The show even gives complete episodes to Angelica and Wesley, but, unfortunately, the show severely lacks in the execution department.

Also, Josh is such a boring and unoriginal lead. Hollywood is full of characters like Josh. The show would have been better off focusing on someone else, or at least by not giving him a cliche mission. I’m not saying I didn’t like Ford as Josh. He’s kind of the only one who looks like a teen, after all. I just didn’t want the main story to be all about him.

I could have also done without the way Daybreak tried handling certain themes. In 10 episodes, we get to see the narrative tackling abuse of power, queerness, masculinity, racism, sexism, and a whole lot more. The problem is that it doesn’t do it well.

On a related note, I would like for Netflix to stop featuring shows that have problematic queer representation. There are quite a lot of such shows on this streaming service, including Sex Education, Insatiable, and Baby. I think the younger queer community deserves better. They definitely don’t deserve queer content that promotes the dangerous trope of how bullies attack or manipulate queer kids because those bullies are in the closet and want to hook up with them.

Back to the review!

Due to it being promoted as a comedy, you can tell when the writers thought they were delivering a joke. The issue is those jokes don’t always land. Also, seeing teens making references to some old-timey pop culture didn’t make sense to me. I guess the adults in the writers’ room were more focused on showcasing what they found funny instead of what actual teens would.

THE ONLY redeeming moment, in my opinion, comes during the final few minutes of the finale. It made me wish the entire show, or at least half of it, had been able to excite me in such a manner. The way the writers handled Sam Dean during the finale helped make sense of who she is as a character and also lifted some of the boredom associated with Josh’s mission to save her.

Again, there were so many other characters this show could have focused on instead of Josh. Sigh!

Have you watched Daybreak season one yet? Let us know.

Previous:“Copa 181” Queer Movie Review: An Okay Film that Suffers from an Unfocused Narrative
Next: The Dragon Prince Season 3: We Have a Trailer!