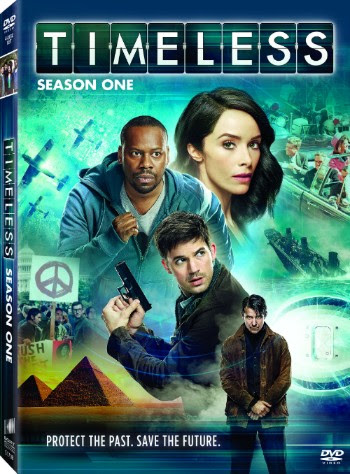 Sony Pictures Home Entertainment will be releasing the complete Timeless Season One DVD set on September 19, 2017!

While I haven’t binge-watched Timeless yet, I have heard about the drama revolving its cancellation followed by the show being renewed for a second season three days later. With the Timeless Season One DVD release, fans can rewatch the events of the first season while they wait for the second season to debut sometime in 2018.

The NBC show follows a history professor (Abigail Spencer), a soldier (Matt Lanter), and a scientist (Malcolm Barrett), as they chase a dangerous fugitive (played by Goran Višnjić) who wants to re-write American history. The upcoming Timeless: Season One DVD release features all 16 episodes from the show on four discs along with a gag reel and seven deleted scenes.

This thrilling action-adventure series centers around a mysterious criminal who steals a secret state-of-the-art time machine, intent on destroying America as we know it by changing the past. Our only hope is an unexpected team: a scientist, a soldier and a history professor who use the machine’s prototype to travel back in time to critical events. While they must make every effort not to affect the past themselves, they must also stay one step ahead of this dangerous fugitive. Can this handpicked team uncover the mystery behind it all and end his destruction before it’s too late?

While the pilot premiered to a total of 12.03 million U.S viewers (including DVR), the numbers continued to drop. The finale was able to receive a total of 6.12 million viewers. The second season currently has 10 episodes ordered.

Are you a fan of Timeless? Are you looking forward to the Timeless: Season One DVD release? Let us know.

Previous:Boruto: Naruto Next Generations 1×16 Review: Crisis – The Threat of Failing