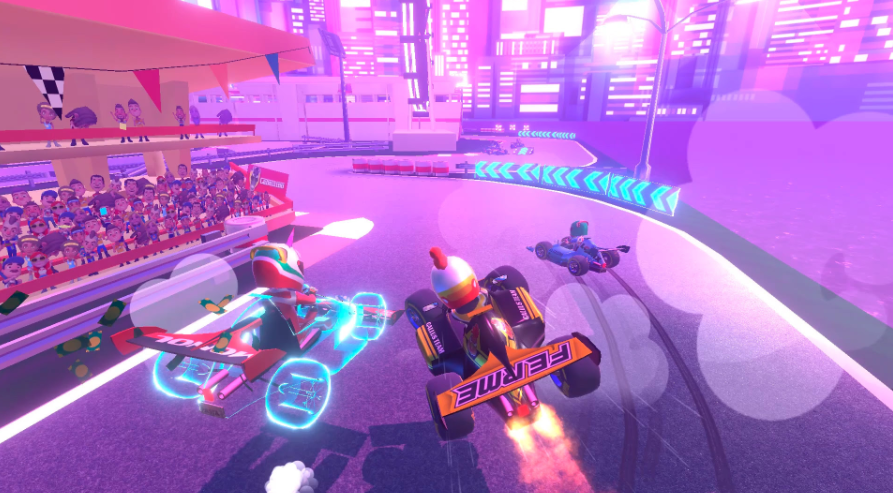 Ivanovich Games has released the Early Access version of their party arcade racer Touring Karts on Steam Early Access. The title is priced at 19.99 USD/16.79 EUR (10% off during the first week). The game is also available on the Oculus Store.

Already being on Steam and the Oculus store, Touring Karts will be made available on all major consoles (including PSVR) and mobile devices at a later date.

The title will be offering “cross-platform Multiplayer support for up to 8 players between all platforms and not requiring a VR device to be enjoyed, thus granting the party for every player, regardless where they are and the device they use.”

“As fans of F1 and the Mario Kart saga, we were missing an experience that united these two worlds taking advantage of all the possibilities that Virtual Reality can offer. We wanted to bring all the excitement and crazy fun of the kart-type arcade games into a universe where we always find new challenges and where we can compete with our friends,” shared Ivan Cascales, Founder and CEO at Ivanovich Games.

According to the Press Release, this is what players can expect from Touring Karts during the life of the product:

As for Ivanovich Games, it’s a small studio based in Catalonia (Spain) and founded in 2010. The company has been focusing on “the creation of original arcade-style video games” with special attention “to Virtual Reality technologies. Some of their better known VR titles are Operation Warcade and Final Soccer.”