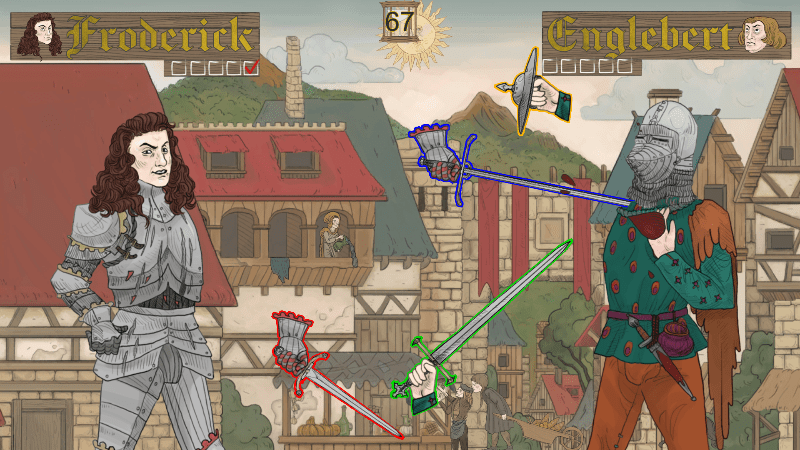 If you’re looking for a party game that knows it’s weird, Riposte! might give you what you want. Inspired by Medieval art and Monty Python sketches, this indie game is currently available on Steam.

According to the press release, the huge variety of bladed weapons in Riposte! “are the stars with direct player control and cunning moves that make every successful stab a thing of beauty.”

This indie game also features single-player gameplay via machine learning that teaches the AI to effectively fight as a human player in 1v1 matches. Which, I mean… ha!

Stab, slice, and block with a huge variety of weapons in heated 2v2 duels, four-player free-for-alls, and other fun mini-games. Fence with friends, brawl in “Tavern Party” mode, compete in tournament brackets, or just take a stab at … stabbing.

It features a number of gameplay modes to satisfy competitive families and roommates.

Call your friends to arms via local or remote play via Steam’s Remote Play Together. Duel together in 2v2 bouts, four-player free-for-alls, and double-elimination tournament brackets.

Play with weapons – not characters! Choose from a veritable arsenal of primary offense and secondary defense weapons in sword and board-style combat. Each player directly controls a weapon with unique abilities, strengths, and weaknesses.

It’s a stabbing party in the Tavern with a mix of duels, free-for-alls, and other silly mini-games.

“Growing up playing local multiplayer split-screen games like Mario Kart and GoldenEye with my friends inspired me to create Riposte! When we all managed to be in the same place at the same time, we loved to play silly, semi-competitive party games and brawlers. It’s those memories of playing games with friends that stick out, and that’s the type of game I wanted to make with Riposte! Even though we’re all social distancing right now, we can still play couch co-op games with our families and roommates,” shared Aaron Maus (Founder & Lead Designer, Misdirection Games).

As for the developer, based in Seattle and founded in 2018 by game designer Aaron Maus, Misdirection Games is “an indie studio born out of an undying love of game jams and original gameplay mechanics.”

You can visit the official website to learn more about this title and Misdirection Games.

Previous:Artists, Writers & Artisans Inks Exclusive Distribution Deal with Diamond Comic Distributors!
Next: BiNet USA Is Back On Twitter & Pretending Their Flag Grab Was About… Racism?