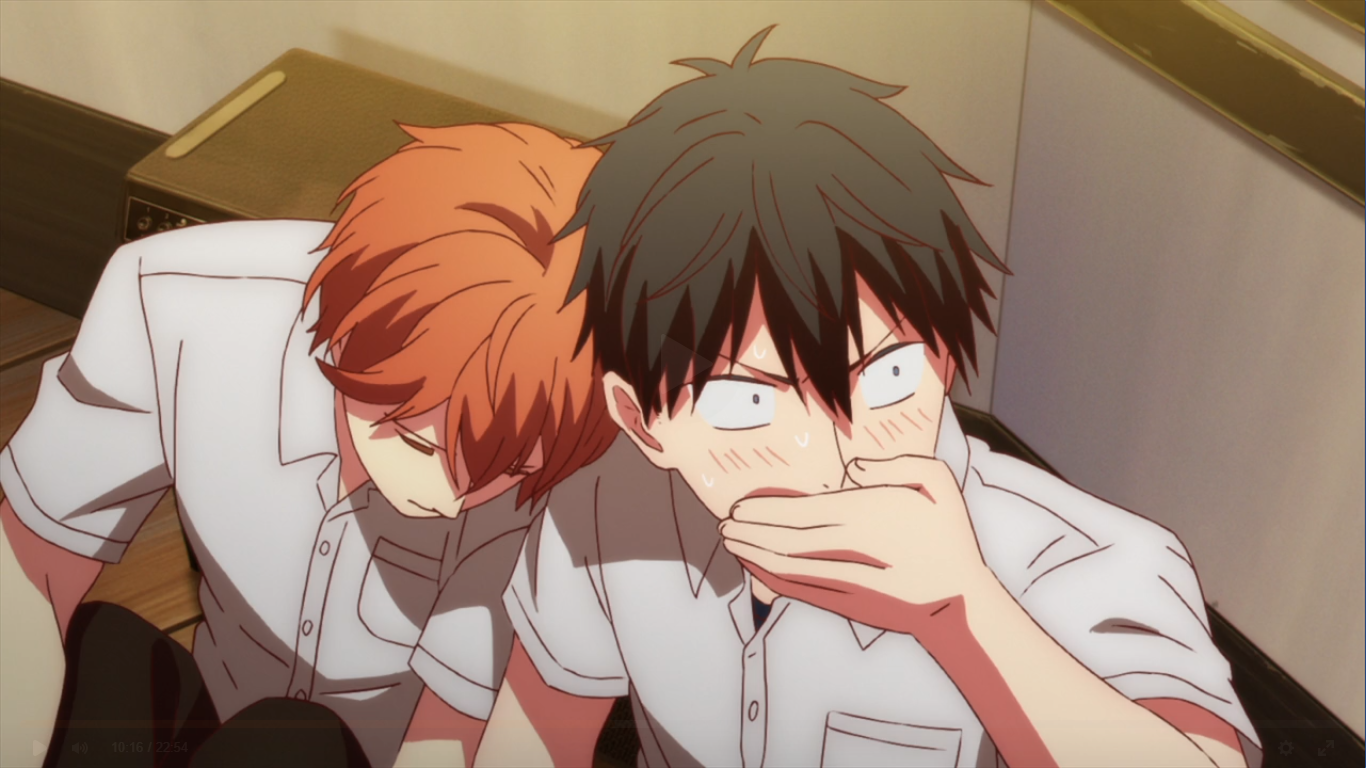 “Tumbling Dice” is yet another episode where not a lot happens action-wise, but we get some amazing character moments. This kind of episode seems to be the core of Given as a series, and it excels at them.

Slowly but surely, Ritsuka is confronting his growing feelings for Mafuyu, and that continues in “Tumbling Dice.” I don’t know if you can describe what he’s going through as “gay panic,” even though he’s clearly doing a lot of panicking. I think he’s more confused than really panicked, although I’m sure it helped to learn that Akihiko has also been with men, so having feelings for a guy isn’t something to be ashamed of. (I can also appreciate that they put that conversation in there. “What’s wrong about it?” Yes. Thank you, Akihiko. What is wrong about it? Not a damn thing.) I love how realistically all the relationships are portrayed. Ritsuka is able to figure himself out in a natural timeline, rather than rushing through everything just to get somewhere.

Given handles the little, day-to-day interactions very well. Small things like pausing to think about what a character is saying, or even showing a character taking a drink; it makes everything feel that much more genuine.

Something else I also liked is that Kasai apologized to Ritsuka for what she said about Mafuyu. (She should be apologizing to Mafuyu but since he doesn’t know she said anything that would just make things worse.) I like that the show acknowledges that what she did isn’t cool rather than just brushing past it. Outing someone is never cool; neither is spreading malicious rumors. 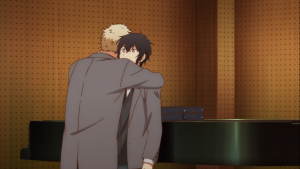 I think “Tumbling Dice” has cemented Akihiko as the best character on the show. His facial expressions, his comedic timing, his deadpan manner of speaking… And he has perhaps one of the most intriguing backstories of the four boys in the band. It hasn’t been explicitly confirmed, but I still lean on him being bisexual; he’s now admitted to Ritsuka that he’s been with men in the past, but we’re not quite sure of his relationship status with Ritsuka’s sister. (There is more stuff going on in the manga that I’m not sure they’ll get into here.) I don’t how much the anime will portray of his and Ugetsu’s relationship but it’s pretty compelling.

I’ve got to say, for all they keep teasing the song they’ll be playing at the live show, it had better be the most amazing song I’ve ever heard in the history of time.

I continue to love this show. If it weren’t for the spectacularness of this season of Attack on Titan, Given may very well have ranked as my top anime of the year.