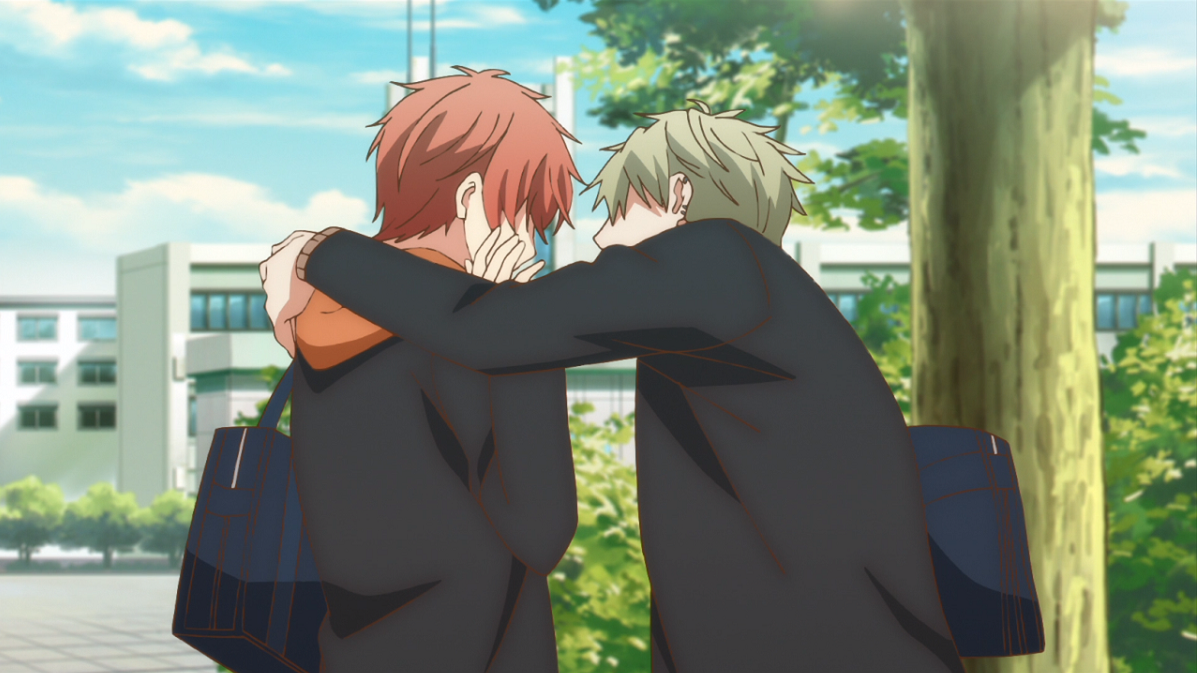 Time is running out until The Seasons’ live performance, and the song they intend to perform still doesn’t have any lyrics. Everyone is worried, and tempers are running hot. Will they be ready in time for their show?

This episode hurt. “Time Is Running Out” shows us a little bit more of Mafuyu’s history with Yuki, and we can see that the numb way he behaves isn’t just grief; it’s guilt. Imagine having a fight with your partner only to find them dead two days later, before you had the chance to resolve anything. Imagine how you would carry that feeling with you. Would you ever be able to forgive yourself?

And this is why Mafuyu hasn’t been able to write the lyrics. He’s still trying to sort out his feelings; he’s afraid to face his feelings, because deep down he must feel that he’s at least partially responsible for what happened to Yuki, and that is a terrifying thing to believe. It’s a heavy burden, the idea that you’re responsible for someone ending their own life, and Mafuyu has mostly been dealing with this alone. Also, don’t think I didn’t catch that brief scene of when Yuki and Mafuyu met, and Mafuyu said that whenever he speaks, his dad hits him. Treatment like that is enough to make anyone quiet. And now people are asking Mafuyu to express himself, which he has never really had the chance to do.

But in this episode he actually gets emotional; he yells, even – twice! As someone who is extremely non-confrontational, I totally sympathized with Mafuyu finally snapping. The end scene – his fight with Ritsuka and the snapped string – was perfect. The abruptness of it was very impactful, especially given the title of “Time Is Running Out”. Just another thing to add to the tension everyone in the band is feeling. Will they be able to restring Mafuyu’s guitar in time? 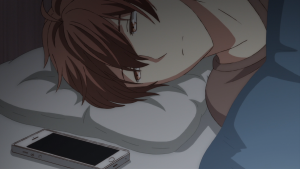 Something that I think this episode did well is to illustrate what it’s like to have depression. I don’t know if I’ve ever felt a sequence of scenes more acutely than I did watching Mafuyu just lying in bed, watching notifications light up his phone, or when he was just standing there, staring at nothing. I felt this episode deep in my bones.

There are still little moments of humor. Ritsuka staring at Mafuyu and then smacking him to get his attention (gay panic, still going strong) and Haruki’s interactions with Yatake helped to lighten what was overall an emotionally heavy episode. Given is very good at these pauses, these slower moments. Something like Akihiko making breakfast isn’t just done to kill time on screen. Every scene has a gravity to it. (In the sense of the breakfast thing, I think it was supposed to give a weight to Akihiko’s relationship with Ugetsu, which is clearly important to him but perhaps not entirely healthy.)

The voice acting in “Time Is Running Out” was really well done. You could honestly hear the regret in Mafuyu’s and Hiiragi’s voices. Plus, the emphasis on the rain helped highlight the tone of the episode in a way that hasn’t really been done yet on this series.

There was no preview for the next episode, so you know something big is going to happen. These past eight episodes have been slowly building to something, and we’re hopefully finally going to see it next week. It’s almost time for the show!