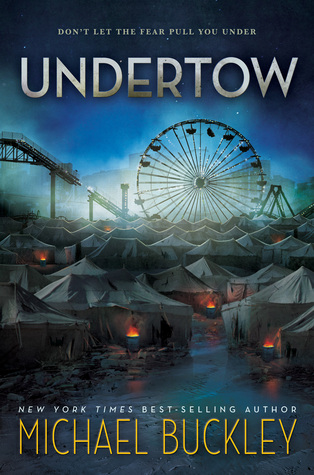 Undertow, by Michael Buckley, is the story of a town under siege. Three years prior to the start of the book, the mysterious Alpha – a race of humanoid sea creatures – showed up on the beach at Coney Island. Since then, the neighborhood has turned into a war zone. It is a virtual police state, with neighbors turning against each other and freedom an almost distant memory. Told through the eyes of main character Lyric Walker, we see the aftermath of an alien invasion and the devastation it has brought upon Coney Island.

The Alpha are mercreatures, but if you’re expecting them to resemble something from The Little Mermaid, you would be mistaken. In the way that there are thousands of aquatic species, so the Alpha are all different. Some of them more closely resemble humans than others, but there is no denying that they are not human. Their culture is hardly like the peaceful world of concerts from the Disney classic; it is harsh and brutal, with common disputes settled by combat, and a general pervasiveness that they, as Alpha, are far superior to the puny humans on whose beaches they now reside.

The main conflict in Undertow revolves around the forced assimilation of the two cultures – neither of whom particularly want anything to do with the other. By court order, several Alpha youths are to enroll at Lyric’s high school, and Lyric would like nothing more to avoid them at all costs. You see, Lyric and her family have a secret – her mother is an Alpha, part of the first wave who came to shore twenty years ago and had to assimilate to survive. If their secret is discovered, they will be sent off to a detention camp like the others, and so they all must fly under the radar. This strategy is blown to bits when Lyric’s new principal demands that she tutor Fathom, the Alpha prince.

Undertow is a thinly-veiled look at racism and other forms of bigotry like Islamophobia, with the residents of Coney Island reacting to their new neighbors with varying amounts of hostility and fear. The Alpha children must be escorted to and from the beach by armed guards to ensure they will not be attacked by the ever-increasing gaggle of militant protestors who set up shop outside the high school. Even those considered sympathizers to the cause are not safe. It is not difficult to make connections between the events of the book and the civil unrest currently happening in various parts of the United States (and indeed, all over the world). It was often frustrating to read because of the horrible things spewed about the Alpha, knowing that these same things are said about human beings. It perpetuates the philosophy that anything “different” is “scary”, that someone is somehow “less than” because they are not like you and me.

While parts of the novel were predictable (of COURSE Lyric is going to end up falling in love with the Alpha prince she is forced to spend time with), I found it different enough to be interesting. I don’t follow the YA trends as well as I should, so I have no idea if this is something already acknowledged, but I suspect that selkies and sea-creatures are going to be the next big thing. Not to mention, I believe it offers a realistic critique of humanity. Sadly, I feel that if today we were placed in a similar situation, the reaction would be the same. We fear what we don’t know or understand, and Undertow is an accurate portrayal of that.

Lyric as a heroine is selfish and whiny, but then, she is a teenager who is placed in a rather difficult situation. I’m sure anyone who has to live under the stifling conditions she does would react in much the same way. However, I was extremely annoyed when near the end of the book, she turned into a stereotypical “special snowflake” in that she is the most powerful human-Alpha hybrid in existence. The fact that they allowed her to fight but insisted that her full-blooded Alpha mother would be safer hiding with Bex was ridiculous.

I wish we had gotten to see more of the supporting characters – like Shadow, Ghost, and some of the other Alpha kids. I wish Fathom and Lyric’s relationship would have been developed a little bit more, because it seemed like they didn’t even really like each other and then suddenly BAM Lyric is in love with him. This is a criticism I have of a lot of love stories, not just in YA books, because I sometimes think the author believes that simply telling the reader that these two characters like each other is enough to justify their eventual relationship. Show, don’t tell. I can buy almost anything as long as it is sold to me in a believable manner.

Overall, I really enjoyed Undertow. I found it to be different from other YA books with comparable premises in that it focuses primarily on the emotional toll rather than action. Truth be told, there is very little “action” in the book until the last few chapters. However, there is still plenty going on to become immersed in, and it is a fascinating and culturally relevant look at what can happen to a community when you sacrifice liberty for safety.

Undertow by Michael Buckley is published by Houghton Mifflin Harcourt and is available now wherever books are sold.