New information has come to light regarding the banning of one of our reporters from the Supernatural convention in Chicago over the weekend. The tweet in question was a quote from the webseries “Doctor Horrible’s Sing Along Blog” and was in response to people assuming she had ulterior motives for sending gift baskets to the cast and crew in honor of the shows ten year anniversary. Out of context, the quote looks mildly malicious, though not threatening. For anyone familiar with the aforementioned webseries, it’s obviously a quote, but without that it could be read as ill-willed. The out of context quote was tweeted by Jensen and Jared’s bodyguard. 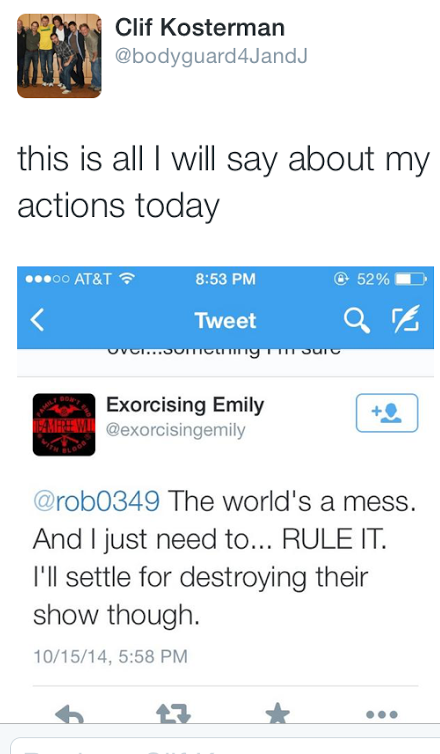 When the entire conversation is taken into context the real intent behind the tweet becomes clear. It was made as a sarcastic response to fans who assumed she had an “evol” plan and motivations for sending the entire cast and crew gifts. As this idea is obviously off base, she referenced a well known webseries as a way to laugh off the notion. It was that quote that led to Clif asking for Emily to be removed from the convention and for Creation to permanently ban her from all future cons.

Clif has responded to our email request over clarification over the matter.

I took the action I deemed necessary at the time. I don’t regret what I did and Id do it again. -Clif Kosterman via Email

Creation has not yet clarified if our entire outlet is banned or if the ban against Emily will be lifted now that the context has been made clear.  According to a representative from Creation, Jensen and Jared refused to go on stage until Emily was removed from the convention over these tweets. Representatives for the network are looking further into matters at this time and we hope this matter will be resolved soon.

We will update our followers with more information as it becomes available.