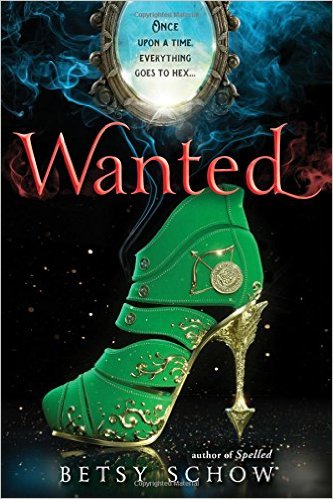 Wanted is the second book in Betsy Schow’s Storymakers series, but whereas the first book, Spelled, was charming and fun, Wanted is merely chaotic and confusing.

Spelled is a semi-retelling of The Wizard of Oz with some Baba Yaga and other fairy tales thrown in. It had its issues, but on the whole it was a cute story with good character progression and relationship developments. Wanted, however, seems to take all of the things that annoyed me in the first book and expand on them, and what comes out is just a mess.

The main character in Wanted is Rexi, the sidekick from the first book. After the events of Spelled, Rexi’s life force is tied to Dorothea, which basically makes her immortal – in the same way that Jack Harkness is. Rexi can die, but Dorothea is able to bring her back. The problem is, every time Rexi dies, she goes to the underworld – Nome Ore – and is forced to sacrifice a link from her chain, aka a memory, in order to return. It’s a little dark and disturbing for an otherwise campy story. Also, Rexi’s link to Dorothea means that she gets her memories and her emotions, which results in a weird, completely unnecessary love triangle that doesn’t make any sense.

There was just too much going on in this book. In the first one, it was mainly just The Wizard of Oz, so it wasn’t too bad. In this book, we deal with Robin Hood and Camelot and a whole host of other myths and stories. At one point, Rexi goes to a villains’ school or something and meets the kind of villains you would expect to see in a fairy tale world – Captain Hook, etc. – but she also meets Hannibal Lecter (…not what I was expecting, but okay) and Rasputin, who has no business being in a fairy tale world because he was actually a real person.

Props for the Monty Python reference, though.

Wanted actually starts off okay – a little dark, but what can you do – and introduces some interesting ideas on how we view certain stories and legends. For example, the way this book tells it, King Arthur was the bad guy, and Mordred was simply trying to save the kingdom. But the closer it gets to the end of the book, the more it goes off the rails. It comes across like Schow had a page limit she was trying not to go over, and she ended up having to cram a whole lot of stuff into the end in order to presumably set up a third book. All that means is that things go crazy, end kind of abruptly, and when it was over all I could think was, “…What?”

I genuinely enjoyed Spelled, but it was a slog to finish Wanted. It just didn’t have the same charm.

Wanted by Betsy Schow is published by Sourcebooks Fire and is currently available wherever books are sold.