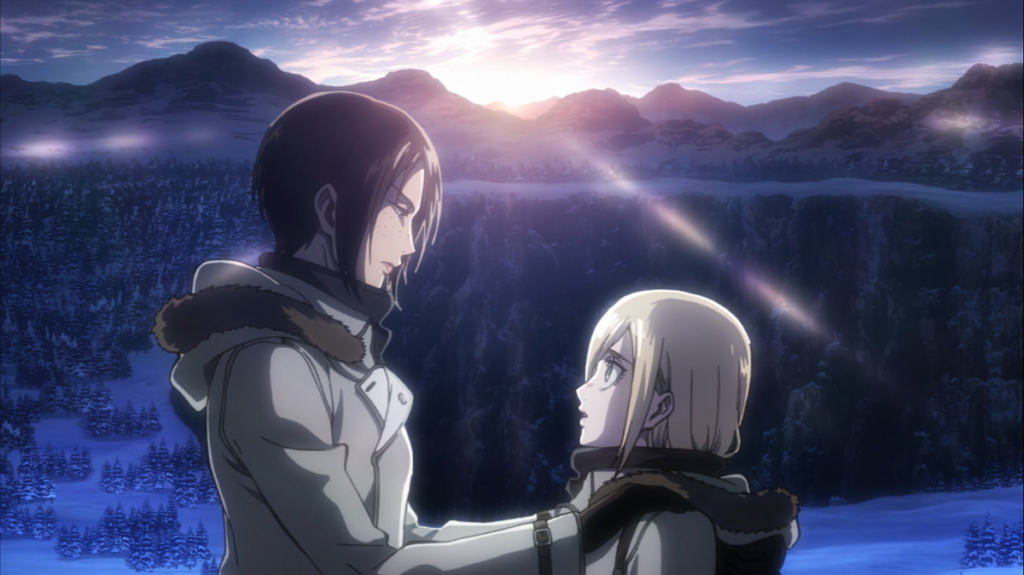 Attack on Titan is a story that keeps on surprising. There are so many reveals, so many twists and turns, that even when it feels like nothing is happening, so much is happening. While “Historia” ironically had more action than “Warrior”, the latter episode is probably more important to the overall story.

It seems wrong to be talking about the lesser reveal first, but here we are. It turns out that Christa’s real name is Historia Reiss, and she’s the illegitimate daughter of a noble family, forced to join the Cadet Corps or lose her life (as is my understanding). In a flashback, we learn that Ymir figured this out and made Christa/Historia promise to tell her the truth someday.

Ymir risks her life to save her friends – but probably mostly Christa.  Their relationship definitely comes across as more than platonic – but even in Titan form, she is overwhelmed by sheer numbers. Distraught, Christa tries on more than one occasion to spur Ymir into further action. The first time, she is successful, demanding that Ymir not worry about whether or not the tower will fall, and Ymir has the presence of mind to carry the others to the ground so that they aren’t crushed. The second time, however, Ymir is too badly injured to move. Christa races forward, yelling that she still has to tell Ymir her real name, when a Titan appears before her.

The arrival of the rest of the Survey Corps is timely, as they quickly cut down the remaining Titans. Eren gets his “first” kill, then promptly gets his wires tangled and falls to the ground. I thought it was funny that he was so excited about killing the Titan with the equipment, considering that he’s probably killed a lot of them in his Titan form. 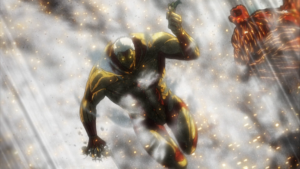 But the big reveal, of course, is that Reiner and Bertolt are the Armored Titan and the Colossal Titan. You know, the two Titans who appeared at the beginning of the series and started this whole mess in the first place. It was so well done, too, so nonchalant, with Reiner just casually telling Eren in the background. It probably would have been better if I understood Japanese, because it’s not really the same with subtitles, but it’s one of those things where you probably think you’re not hearing/seeing things correctly anyway.

We see in a flashback that the Survey Corps suspected that Reiner and Bertolt may be Titans but didn’t want to let on that they knew, hoping that they could lure them underground and capture them. (Do they not remember how that plan did not work with Annie?) Eren tries to laugh it off and give them an out, but Mikasa isn’t playing around and busts in trying to kill them. At this point Reiner is struggling with something we don’t yet understand and just decides to go for it. He and Bertolt transform right there on top of the wall.

Both “Historia” and “Warrior” were on point with their music. I tend not to notice the music unless I’m really struck by it, and both of these episodes did a fantastic job in that department. The animation was excellent as well, particularly Reiner and Bertolt’s transformation.

As I haven’t read the manga, I think we’re not meant to truly understand what Reiner’s monologue really means, but his deteriorating mental state is fairly clear. I don’t think he would have just blurted out the truth to Eren if he were in his right mind. But now there are so many lingering questions. First of all, just how many members of the 104th are secretly Titans? Sheesh. Secondly, what causes the different Titan forms? Annie and Eren’s look similar, but then you have the Beast Titan, and Bertolt as the Colossal Titan is pretty damn extraordinary.

What did you guys think of “Historia” and “Warrior”?