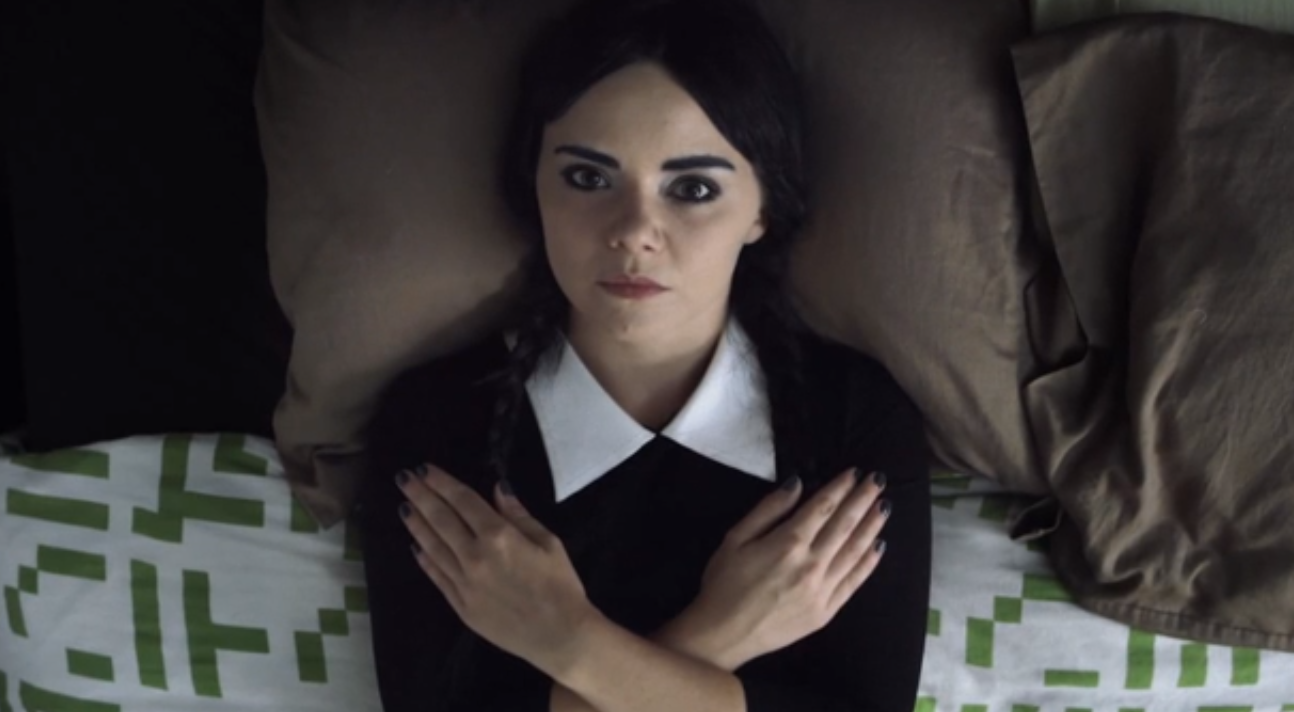 If you’ve got twenty minutes to spare and you’re a fan of absurdist macabre comedy, the Adult Wednesday Addams series is perfect for you. The series launched in September and released a new 2-3 minute short every Wednesday leading up to Halloween. Even though the spooky holiday is over, the mini web series is good for viewing year round just like the rest of The Addams Family franchise. It takes the pale, pigtail clad character from The Addams Family, ages her up to adulthood, and places her in what would be pretty ordinary situation with a typical gothic Addams twist.  What would be a pretty normal situation for any other young adult becomes a hilariously morbid task with Wednesday behind the wheel.

“My parents are despicable monsters and I’m grateful for that, but I can’t sleep in my childhood coffin forever,” Wednesday says in the first episode as she interviews with two potential roommates.  The bizarre introduction sets up the rest of the of the episode perfectly.  Following this experience comes five more shorts covering topics such as dating, job hunting, and even a trip to Planned Parenthood.  Each situation is met with the same mix of confusion, disgust, and curious acceptance from the ‘normals’ around her that made the original Addams Family franchise so enormously popular.  People aren’t quite sure what to make of Wednesday.  Some love her.  Some hate her.  Some are afraid of her.  But everyone certainly notices her.

Most people are aware of the Addams Family, but for those of you who aren’t let me break it down for you. This macabre family dates back all the way to 1938 when they existed as a series of single image comics in The New Yorker. They blew up in the 60’s with a TV series and gained a resurgence of popularity 90’s with the movies where Christina Ricci plays our lovably creepy little Wednesday. It’s the movies from the 90’s that have the most buzz on social networks such as Tumblr. Many users are drawn to Morticia and Gomez’s strange, yet oddly supportive parenting methods as well as Wednesday’s morbid quips towards all the ‘normal’ kids around her. Some gif sets have reached several hundred thousand notes, proving that this brand of humor definitely has an audience.

This series is written by Melissa Hunter, who also plays the title character. Melissa Hunter is an actress who has mostly starred in shorts with a brief part in an episode of Important Things with Demetri Martin. These videos appear to be a small pet project as it doesn’t seem to qualify for an entry on IMDB. The videos have blown up on Tumblr, though, with most of them getting well over 70,000 views. That’s a pretty good showing for YouTube videos by someone who is essentially unknown. People are begging Melissa Hunter to make more videos and it seems she’s obliging, if her small post-season thank you video is anything to go by. This proves that in order to be successful with today’s current social media you don’t need a big budget, expensive advertising, or an “in” in Hollywood. All you need is a YouTube account and talent. The rest falls into place on its own.

This series of YouTube shorts has struck a chord with the same demographic that gave the gifsets from the 90’s movie such an enormous amount of notes. It catches all of the macabre humor, deadpan delivery, and adorable creepiness that exists in the previous incarnations of the character, but brings in a more mature elements that appeal to the Tumblr crowd. If the idea of Wednesday Addams having an awkward Internet date is hilarious to you, you’ll love this series.  With it’s incredibly short length there really is no reason to skip it.

Previous:Fandom Wants to be Heard and Orlando Jones is Listening