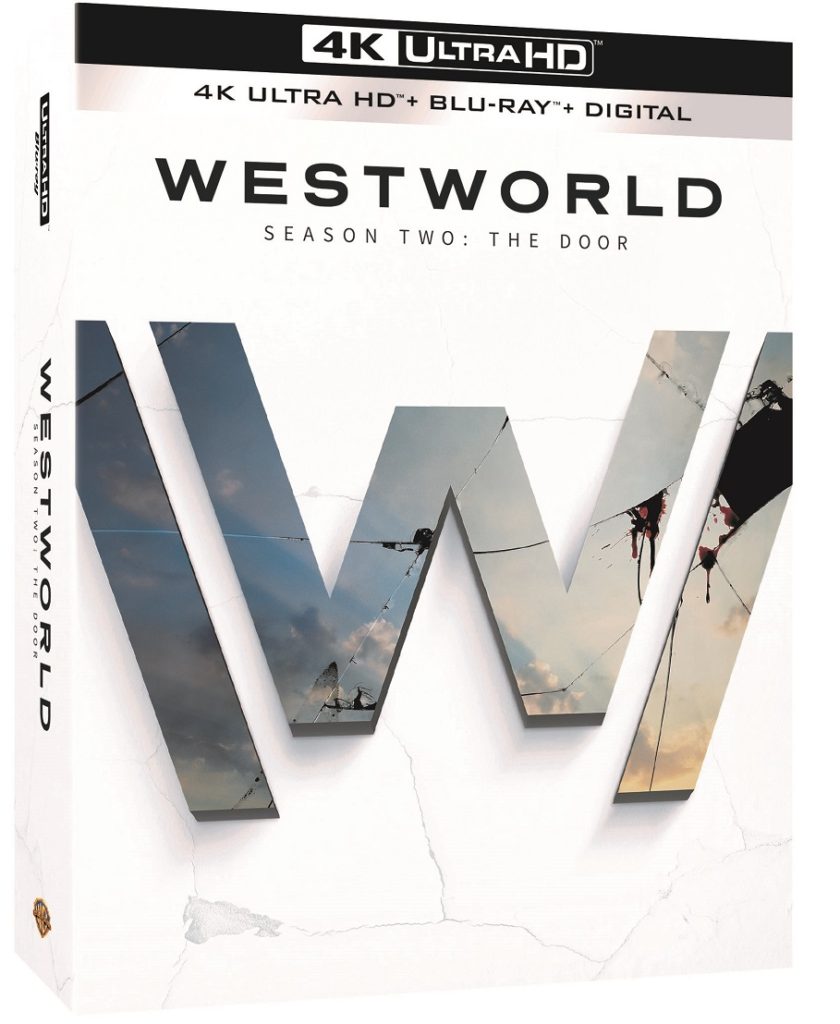 All 10 episodes from the highly enjoyable Westworld Season 2: The Door are currently available to fans on Digital, 4K UHD, Blu-ray, and DVD. I can’t wait to see the third season!

Warner Bros. Home Entertainment provided me with a free copy of the Westworld Season 2: The Door 4K UHD Blu-ray I reviewed in this Blog Post. The opinions I share are my own.

Westworld is based on the 1973 Michael Crichton (written and directed) film. The first season of Westworld premiered on HBO back on October 26, 2016. Westworld Season 2: The Door premiered on April 22, 2018. The show has been renewed for a third season.

Coming to the plot of The Door, we get to see a more liberated park as the hosts decide to go after humankind. Dolores (Evan Rachel Wood) takes up the leadership role to escape the park. While Dolores is on her mission, the show also put Maeve (Thandie Newton) at the forefront as she discovers her ability to control other androids.

The second season gives us a deeper look at the people who created such parks and the ramifications they now have to deal with because the hosts are not happy about the way they have continued to be treated. In true Westworld style, you can expect a lot of jumps from The Door with the narrative showing the future, present, and the past in the same episode. And yes things can get a bit confusing, but it is an enjoyable kind of confusion.

Also, binge-watching the second season does help deliver a better understanding of what is happening compared to trying to make sense of everything with one-week breaks between episodes. The main players are Dolores, Maeve, Bernard, and William (The Man in Black). It is amazing to see how they have their individual quests, driven by their own goals of wanting freedom or redemption. I also liked seeing more of Tessa Thompson as Charlotte Hale. We also got to see different parks!

I have to mention I didn’t like the glorification of the British Rule in the park called the “The Raj” because of my country’s history, but at least the show didn’t stay there long. Of course, there had to be a park where Caucasians were served tea and biscuits by South Asians (eye roll).

Anyway, I liked the second season better than the first one. It seemed more fast-paced and presented higher stakes. The show continues to be a critical success, with the second season garnering an impressive amount of award recognition. 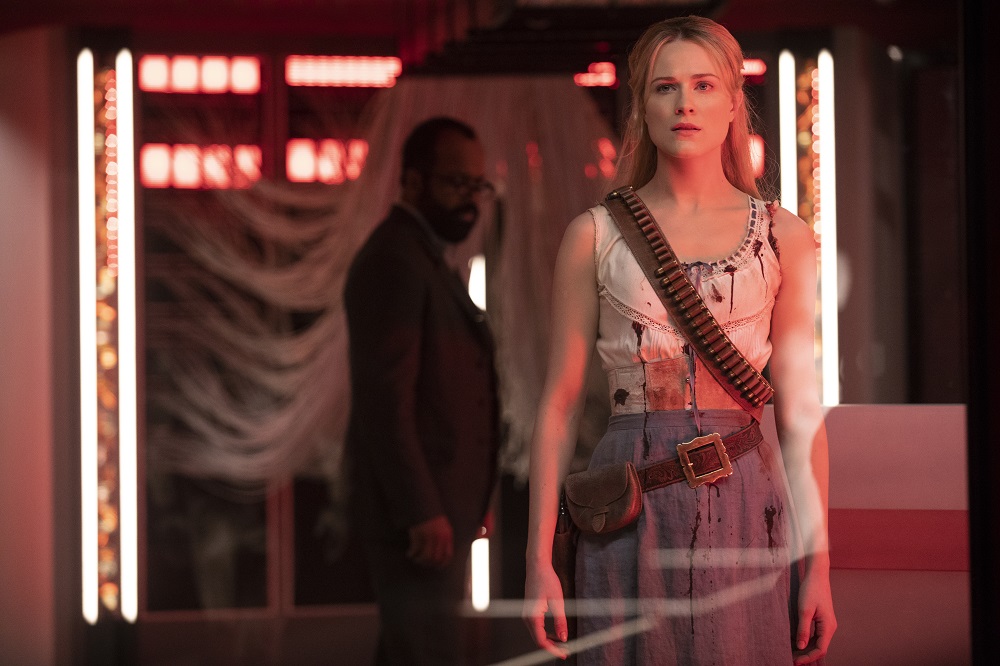 Bernard and Dolores in Westworld Season 2: The Door (Image: PR)

As for the Westworld Season Two: The Door home release, along with all of the episodes fan can enjoy exclusive content. The 4K UHD Blu-ray release comes in a sturdy cover with the back featuring certain images from the show, the “Chaos Takes Control” tagline, synopsis, and details about extra content.

The 10 One-Hour episodes are:

The show looks incredible in the home release presentation. It is bright and colorful. The scenes at nighttime are clear. There is a lot of detail to take in from the scenery, the skin textures, and the clothes. The 1080p AVC rendering of the Blu-ray is impressive. I don’t think you will be missing out on too much if you decide to watch the Blu-ray specific video presentation depending on the system you have.

The audio presentation (Dolby Atmos) is spectacular. The dialogues are clear. You can also make out subtle background cues during certain scenes which add to the overall experience. While the action sequences are awesomely loud, the soundtrack does a great job of grabbing your attention during the intense scenes where characters are simply talking to each other. 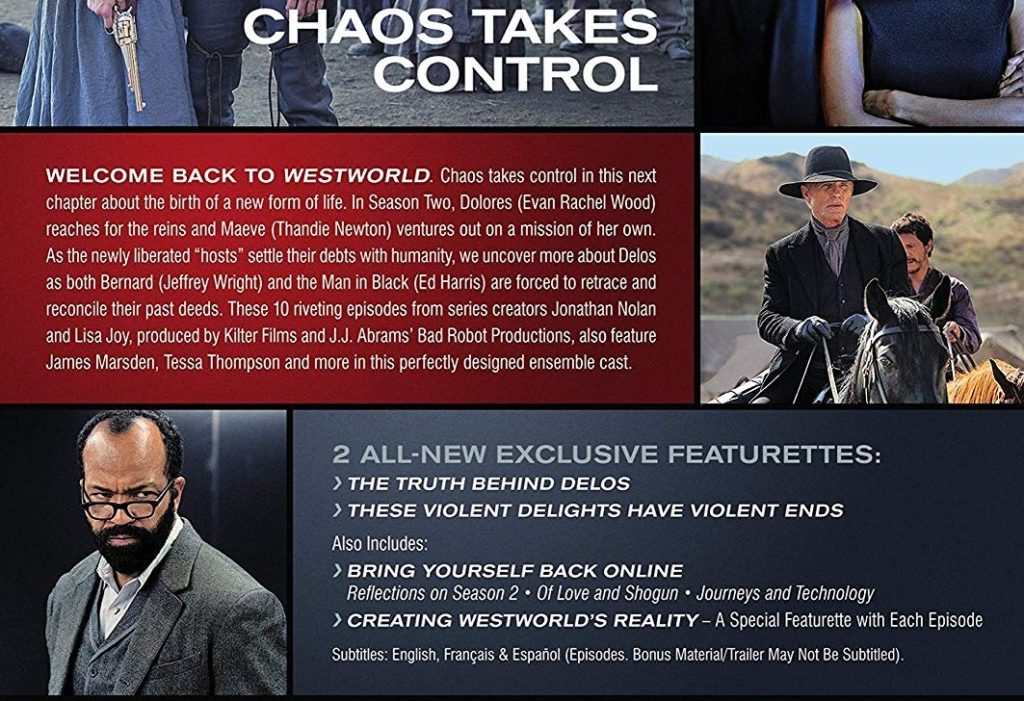 Details on the back of Westworld Season 2: The Door 4K UHD Blu-ray cover

The bonus content does do a good job of recapping the first season and reintroducing the characters as well as what we can expect from their journey during the second season. I also liked seeing all of the hard work going into creating the different sets. I would have liked audio commentary of all the episodes though. Having said that, fans of the show will enjoy the behind-the-scenes looks.

Westworld Season 2: The Door is currently available on 4K UHD, Blu-ray, DVD, and Digital. You might want to pick a copy up as a gift for a loved one if not just for yourself.