“X-Men: Battle of the Atom” Review…The Future of the X-Men 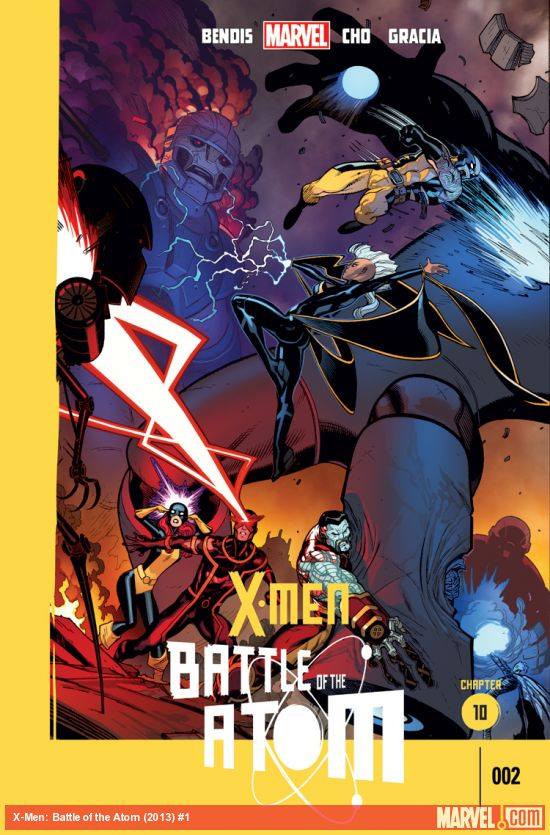 The major story arc for all the X-Men titles this year was “Battle of the Atom”. Even though it was a 10-part crossover it felt as is if we, along with the characters, went through a lot in a short amount of time. The story reached its conclusion in two awesome months because almost every X-Men title was featured in it. It started in September and on  October 30th, the last issue: “X-Men: Battle of the Atom #2” was released and let me tell you, it was amazing!

Issue #9 ended with a cliffhanger with all the anti-mutant weaponry being fired from the S.H.I.E.L.D helicarrier. Was I worried about what would happen? Duh! No X-Man could take care of that in time, not even the mighty Magneto. 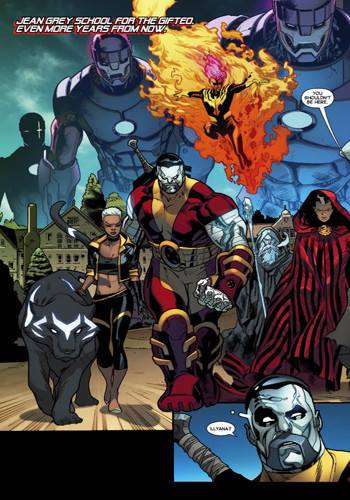 The final issue of the series, issue #10, starts with the X-Men determined to hold the line. All of them attack the missiles and the artwork is amazing. The fight panels showcase every character. It’s always good to have more than one panel on a comic page when telling a story with a lot of characters. It was nice to shift from one fight sequence to the other with the characters talking about their issues as well. The biggest shock was when a missile landed on the ground and didn’t explode. Even Maria Hill, S.H.I.E.L.D director was shocked. She knew what the missile carried and she wasn’t happy about it. Future Best gives a speech in order to recruit the present X-Men to his side and then a Sentinel kills him…Sentinels! Huge one’s!

Two fights occur from there on: The present X-Men and the future X-Men against the Sentinels, as well as against the Future Brotherhood. A lot happens in just a few panels. The future Jean Grey attacks Cyclops and Wolverine, saying that it was their fault mutants are facing such a situation. The Jean Grey from the past steps in with her teammates and battles her counter-part. The Jean of the future loses control and explodes, taking everything out in the proximity. Luckily Magik is able to transport the X-Men back to Wolverine’s school and the Brotherhood escapes as well.

The issue gave us four epilogues, all of them telling where the future of the X-Men series is headed. I personally liked the one with Jubilee and a grown-up Shogo. The whole ‘adoptive child’ thing was handled quite well and I was happy to know that baby Shogo won’t be leaving her anytime soon. The X-Men of the past go back to their timeline and that led to the final epilogue…the one which, in my opinion was the most important: Kitty Pryde going to join with Cyclops and his X-Men…what? I wasn’t expecting that. I wasn’t! I knew Kitty wanted the young X-Men to stay, but seriously, we all knew that was a bad idea. Don’t know why Kitty was being stubborn about it and saying she couldn’t trust Wolverine and the others anymore. She knows how bad meddling with time can be. I have my fingers crossed that she’ll be working as a spy for Wolverine and his team.

There were still a few questions I wanted answered. How did Kid Omega become the host for the Phoenix? How did future Jubilee get her claws? Why would Logan have a child with Mystique? And what’s up with Storm’s future daughter…having a black panther for a pet really looked like as if the Black Panther was her father, right? If Marvel is thinking of getting Storm and the Black Panther back together, then they better be wise about it. Personally I’m happy with the divorce and her hooking up with Wolverine. It gives much more to do rather than sitting in her throne room and ruling over a very advanced nation. (Yes, Storm and Wolverine are my OTP! Sue me if you want!)

Time-travel has always played an integral part in the X-Men series and this time it was no different. The crossover featured every X-Men title, except the Uncanny X-Force series, and I’m looking forward to seeing where the rest of the series go. The X-Men of the present know that the future isn’t so bright for them and S.H.I.E.L.D has made a new set of Sentinels. It would be nice to see them handling these issues.

In other good news, we will be getting an all new “Amazing X-Men” series in which Wolverine and his team will be looking for the deceased member, Nightcrawler, in the afterlife. I’m looking forward to that as well.

What are your thoughts about the conclusion of the time-traveling series?