I’m going to be posting recommendations in groups of three in clusters that share similar themes or ratings. This second group is all non-explicit series, which can be categorized as “boys love” (BL) or shonen-ai as opposed to explicit yaoi with mature content.  These particular selections are also grouped together because they all involve magical elements.  With the exception of Monochrome Factor, these three series also don’t solidify the relationship with a kiss, but there are plenty of hugs, hand holding, and deep emotional bonds in all three series.

This was one the first series I picked up over a decade ago that I decided to try again on my dive back into yaoi fandom.  In this series there are ‘shinigami,’ or Guardians of Death, who deal with matters relating to the supernatural.  The shinigami were once people and were recruited into the Ministry of Hades after death, specifically the Summons Section of the Judgement Bureau.  I sort of describe it as Dead Like Me meets X-files.   When weird supernatural stuff starts to go down, the shinigami investigate and get to the bottom of it.  They are the paranormal investigators of the afterlife, but get the benefit of walking around among the living while they solve the mysteries they’re given. 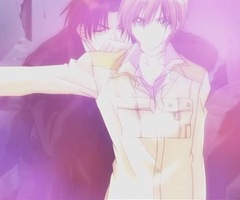 The main pairing in this show never does anything to solidify that they are in a relationship like kissing, but there is a deep emotional bond between them that most explicitly canon couples can’t hold a candle to.  The relationship develops naturally and on a very deep spiritual level.  We have Tsuzuki, who has been a shinigami for a little over 70 years who has a dark and emotionally turbulent past.  He was 26 years old when he died.  Despite this, he’s still one of the cheeriest characters on the whole show and has a killer sweet tooth.  The other character is Hisoka, who died at the age of 16 after a long three year torturous death.  The circumstances surrounding his death were magical in nature and continue to plague him in the afterlife, which makes him often physically weak despite being a supernatural being with an array of magical powers.

The four story arcs covered in the anime are generally separate “monster of the week” type plots, but a common villain emerges from the background and the character development builds into something beautiful.  They start off as antagonistic towards one another, but end up willing to put their lives on the line for each other by the end.  It’s a slow burn romance, which in my opinion is often the best.

TRIGGER WARNING: There are implications of rape in Hisoka’s history so if that triggers you, you may have to avoid this series.  The moments where they reference this are often brief, but if even a second or two of rape implications can trigger you, you might want to avoid the series.

This one caused one of the strongest emotional reactions to a piece of fiction that I’ve ever had in my entire life.  The premise is one of the most romantic, tragic, and beautiful things I’ve ever encountered and I’m not ashamed to admit I broke down crying multiple times during the show.  The pairing Luka/Yuki went immediately very high on my OTP list right off the bat.  I want to watch the show again because I loved it so much, but with how emotional I’m getting just thinking about the show makes it difficult to even consider that at the moment.  The best I can do is recommend it to others and hope you all have a similar emotional journey as I did. 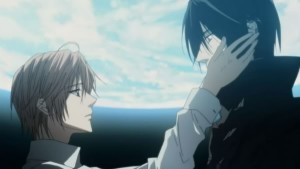 The mythology of this story involves beings known as “Zweilts” who are reborn into human bodies to fight the “Duras” demons.  The battles are leading up to an ultimate final battle, of course, but there are plenty of lower demons to battle to fill up many episodes and let the relationships between the characters develop naturally.  The Zweilts usually remember their past lives and are usually reincarnated as the same gender as their previous lives, but the character Yuki is an exception on his current reincarnation.  He’s reborn as a man this time and has no memory of his past lives, including his romance with the Duras Luka, who has sworn to protect Yuki through all of his reincarnations.  Yuki can feel that there’s something special there, but he remembers nothing.  Luka, however, has been alive for centuries and remembers absolutely everything.

Is that not the most romantic thing you’ve ever heard?  And horribly tragic too. Luka has stuck by Yuki through many reincarnations and protects him with his life, even if Yuki doesn’t remember anything about him.  Luka has turned his back on his own kind because of his love of Yuki.  This show, man.  If you like romances that stick with you for days or weeks after you’ve watched it, this one is definitely for you.  You add the very emotional premise with some badass fight scenes and you have an amazing anime that’s worth your time.

I have to admit that this one is hard to write about.  It’s quickly become one of my favorites, but the ending left me crying at 3am by myself and desperately needing to watch the fluffy episodes of Junjo Romantica to lift my spirits.  Don’t get me wrong.  This series is generally not sad.  It has a lot of humor to it and it’s visually beautiful, which is why a sad ending felt like such a punch to the gut.  But enough about how I spent an hour crying alone in a darkened room hugging my cat, and on to what this show is actually about… 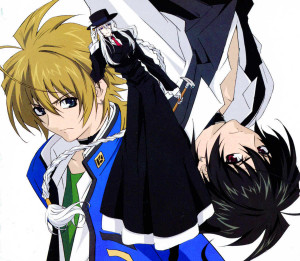 Monochrome Factor is about a mostly apathetic high school boy named Akira who gets suddenly dragged into the world of magic when a man named Shirogane rescues him from monsters from the shadow world.  In order to save him, Shirogane turns him into a “Shin,” which means when he’s in his Shin form he is invisible to humans and is better equipped to fight the monsters.  His hair also turns black, his eyes turn red, and he’s decked out in a really badass outfit, too.  It’s pretty rad.  It’s no coincidence that he and Shirogane ran into each other, however, and as the story progresses you begin to understand Akira’s role in the grand scope of things.

Beyond our two main leads, we have a wonderful cast of side characters as well that are partially there for comedic relief and partially there to keep Akira grounded in the real world while all this magic stuff is starting to consume him.  I feel like this story utilizes it’s secondary characters very well and I found myself enjoying them just as much as I did our two leads.  They are very strong and interesting characters that have a purpose beyond just decorating the background.

Of the three recommendations in this series, this is the only one that features an actual kiss between our pairing.  Both kisses feature have the caveat that they are for the transfer of magic between them, but their relationship is still a very deep and powerful one.  While Akira often voices his doubt about Shirogane, a trust develops between them that basically saves the world.  I refuse to drop major spoilers in my recommendations, but I will say that the ultimate path of this relationship is massively tear inducing and stuck with me for many days after watching it.

Stay tuned for more Yaoi/Shonen-ai recs in the future!