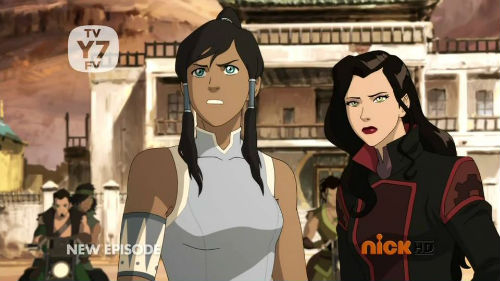 The premiere of The Legend of Korra Book 3: Change picked up the story two weeks after the finale of Book 2. The whole world has changed after the epic battle, and Korra has a lot to do in order to maintain balance.

The new book is rightfully titled Change because that’s what the story is about. The first episode of the three-episode premiere, etitled “A Breath of Fresh Air,” showed the people of Republic City having to deal with the changes that occurred after the Harmonic Convergence. Korra just doesn’t seem to catch a break. Even though she put her life on the line to protect the world from the evil entity in Book 2, people aren’t warming up to her. Republic City has been covered in vines and spirits roam free.I enjoyed seeing the new Korra. Her rebellious nature was acceptable back in Book 1, but Book 2 did a great disservice to her character by making her overly stubborn and focusing on her romance with Mako. The new book showed a more calm and collected Korra which I think a lot of the fans will appreciate.

Due to the spirit and the physical world merging together, new airbenders started to pop up around the world. Tenzin’s dialogue in which he wished his father, Avatar Aang, could see things change felt quite emotional. Aang spent all his life knowing he was the last airbender, and he would have been happy to see his tribe restored. A thing that caught me by surprise was Bumi getting airbending skills. I always thought of him as Sokka from the previous series, a character that wasn’t a bender but was still able to hold his own against the most powerful of opponents. The story did a great job of familiarizing the audience about what the new book wanted to do. A powerful new villain, an airbender named Zaheer, was introduced. I think his mission is to kill the Avatar, though I don’t know what good that will do because he or she will be reincarnated. Maybe he has a way of killing Korra without the Avatar being born again? He also mentioned an airbender from 400 hundred years ago who was able to fly. I have a feeling we will be seeing Zaheer learn how to fly by the end of this book.

The second episode “Rebirth” showed Team Korra travelling to the Earth Kingdom in order to recruit airbenders to recreate the Air Nomad community. This episode was filled with comedic scenes. Tenzin used his soft approach to recruit new benders, while Korra used her tough approach, and went as far as physically dragging a new airbender out of his home. In the end, Bolin had to step in and his approach ended up being the most effective. A new character, a young airbender named Kai was also introduced in the series, and he struck up a friendship with Jinora. Two new villains were also introduced whom Zaheer broke out of prison: an earthbender named Ghazan, and an armless female waterbender named Ming-Hua.

The third episode showed the team reaching Ba Sing Se, the Earth Kingdom capital, ruled by the Earth Queen. Looking at her was enough to tell that she was hiding something from Korra. This episode also focused a lot on Mako and Bolins family. It was nice to see the premiere focus on the characters rather than their love lives. Korra and Asami ended up sharing some badass scenes where the girls took down bandits, while Mako and Bolin reconnected with their long lost family. I’m looking forward to seeing the friendship grow between Korra and Asami. Those two are amazing female characters, and the Korra-Mako-Asami love triangle really brought everyone involved down. It’s good to see two female characters that are friends and not fighting each other for the affections of a male character. Zuko, one of the leads from The Last Airbender also had a lot to do in the episode. He traveled to the North Pole to ensure Zaheer and his comrades wouldn’t come to break out the last member of their team, a female firebender. I was glad to see Korra’s cousins, Eska and Desna, becoming the new Chiefs of the North Pole. The twins were amazing in Book 2 and it’s good to have them back. 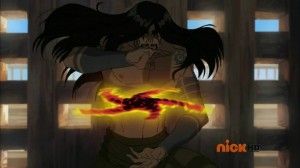 All in all, the premiere of Book 3 exceeded my expectations. The story felt stronger than Book 2, the villains looked great, the lead characters had grown, and the fight sequences looked spectacular. I am looking forward to seeing how the series turns out and what it has in store for the finale.

Best Bending Award: The villains showed amazing skills during the three episodes, and Zuko was right when he said the four of them could take down the world together. Though Ming-Hu came close to getting the award, I would have to give it to the Ghazan because his earth/lave bending skills is something I’ve never seen in the series.

What did you think of The Legend of Korra Book 3: Change? Are you excited about the rest of the season? Feel free to share your thoughts in the comments section below.

Previous:“Teen Wolf” Returns to SDCC with Themed Booth
Next: Recommendation: Slither and Super