Yuri On Ice Movie! This Is Not A Drill! 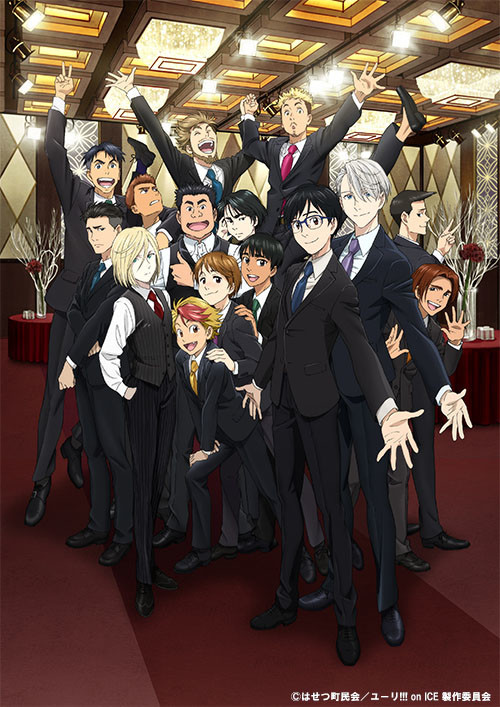 I woke up to a storm of tweets this morning about Saturday’s Yuri On Ice stage event, but by far the best news to come out of the evening is that a Yuri On Ice movie has been greenlit!

That’s right, everyone! After the tweets claiming that Victor got jealous and naked and climbed on top of a castle to proclaim his love for Yuuri, the news broke that there will be a Yuri On Ice movie – and it will be a brand new story, not a compilation film! If the whole drunk naked Victor hadn’t set Twitter ablaze, that announcement sure did!

No other details have been released (and still no confirmation for season 2), but the stage event itself will be released on Blu-Ray and DVD on July 28, with pre-orders already open – as is my understanding. So we’ll all soon be able to see just what the heck was going on for ourselves. (Something about Chihoko? And some kind of strip Rock, Paper, Scissors? And Yuuri got naked, too?)

The stage event also revealed the “With a Wish” wedding tuxedo collaborations. The entire collection was on display for fans.

“with a wish” collaboration tuxedos
the whole collection!!! pic.twitter.com/TzSZTrtON2

As if that weren’t enough, Junichi Suwabe (Victor), arrived at the event in coach!Victor cosplay, complete with Makkachin tissue box. Later, he dressed – and posed – as the Victor G.E.M. figurine.

It sounds like it was a pretty wild night! I hope everyone is okay after all of the drama!

And don’t forget, if you’re lucky enough to live near of the three American cities hosting Yuri On Ice pop-up shops (New York, San Francisco, and Carrollton, TX), they open today! I’ll be heading out to NYC’s later today, so maybe I’ll see some of you there!

Previous:Marvel vs. Capcom: Infinite Reveals Gameplay With 2nd Trailer! Where Are The X-Men?