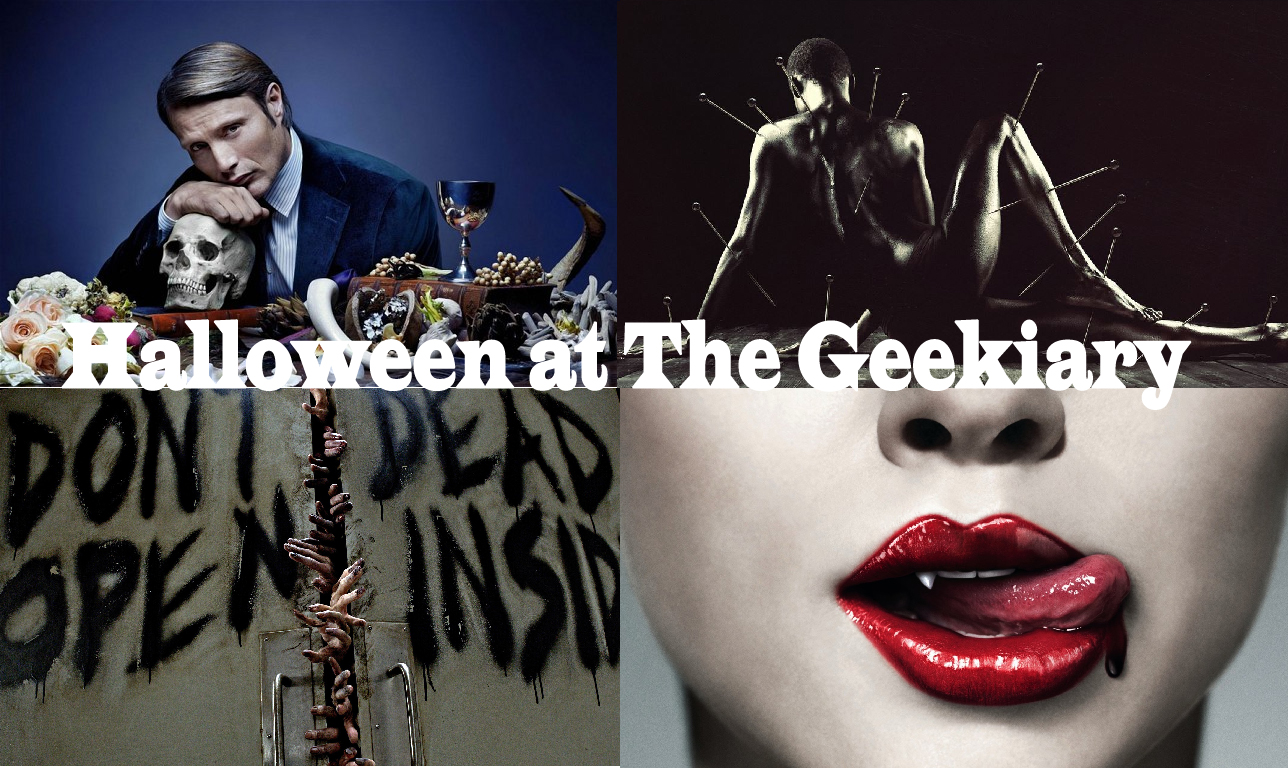 What better way to celebrate this holiday than a special cosplay – or in this case, simply COSTUME – post?

Cosplayers have some of the best Halloween costumes. It is known. And so for Halloween 2014 I asked some fellow cosplayers to share their favorite costumes, ones that they made/put together and wore not [just] at conventions, but for what is a favorite holiday for may of us…Halloween!

Us cosplayers may not have amazing photographers around when we’re out and about for the Holiday, but we have our fun nonetheless. Here’s a group of great cosplay Halloween costumes… 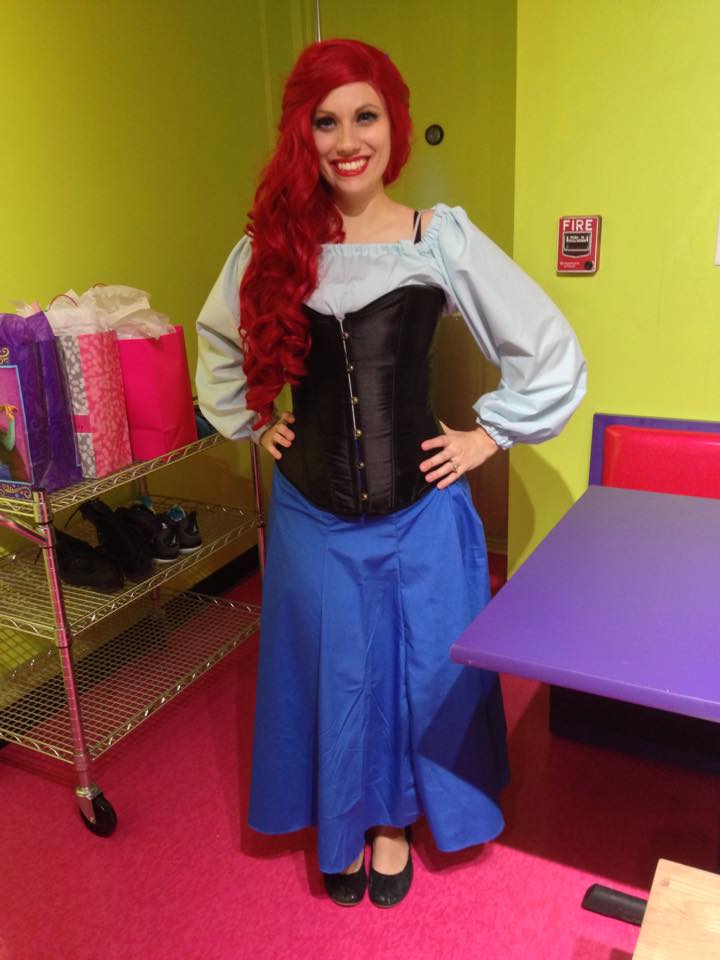 I love wearing Ariel; I’ve been doing so for some years now. It goes back to when I was a kid and wanted to be a mermaid! I guess the little girl can grow up but she’s always a little girl at heart… 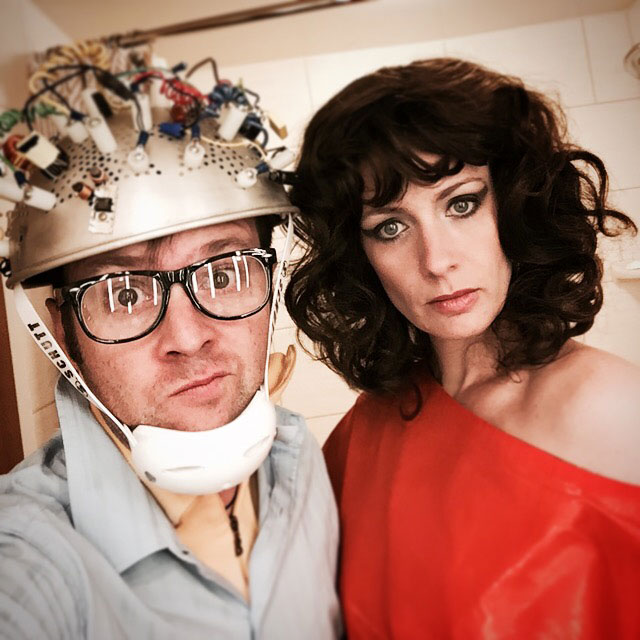 Zuul and Vinz Clortho had fun terrorizing Disney’s Magic Kingdom at Mickey’s Not So Scary Halloween Party earlier this month.  Ariel was made particularly uneasy by our presence! We put these costumes together in a single weekend.  Zuul’s dress and Vinz’s helmet were both created from scratch. 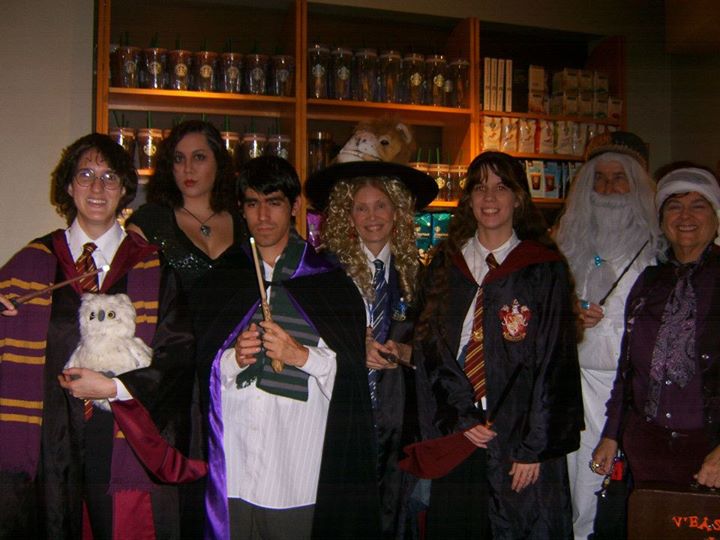 This is my Tolkien Society group doing Harry Potter on Halloween 2011, right before embarking on our usual Waikiki crawl. That would be me as Harry on the far left, and it’s probably my favorite cosplay since I’ve worn it for so many years and events, and made so many friends while wearing it (and I love the series so much).

Terry Jo & Eva
as The Wet Bandits from Home Alone 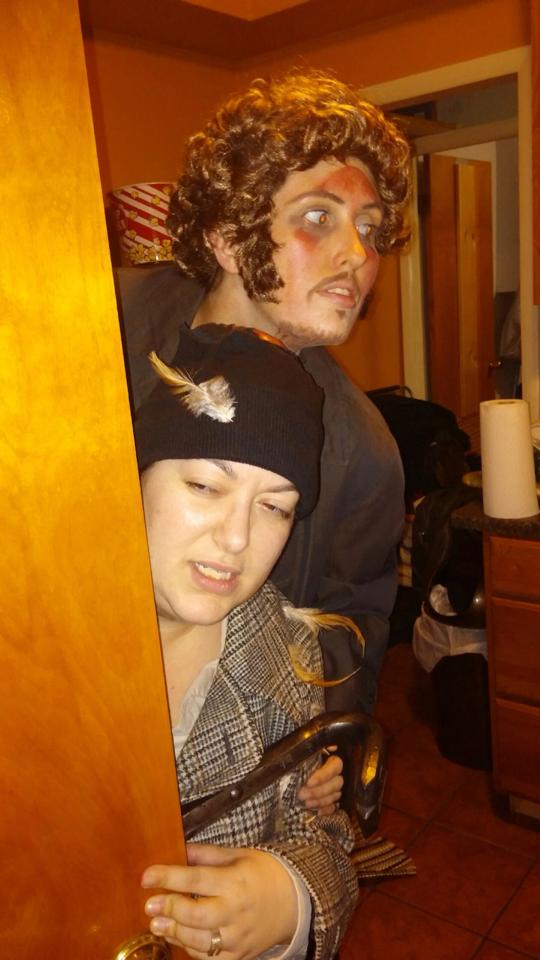 Here is my favorite Halloween costume as of last Saturday! I’ve wanted to have a Wet Bandits duo for years, but it is extremely hard to propose to a friend to be your Joe Pesci. Eva and I had a blast posing for pics in this costume and we won Best Male Costume at the party. Crowbars up!

(Terry Jo was also featured in Summer Cosplay Series 1×10 – check it out!) 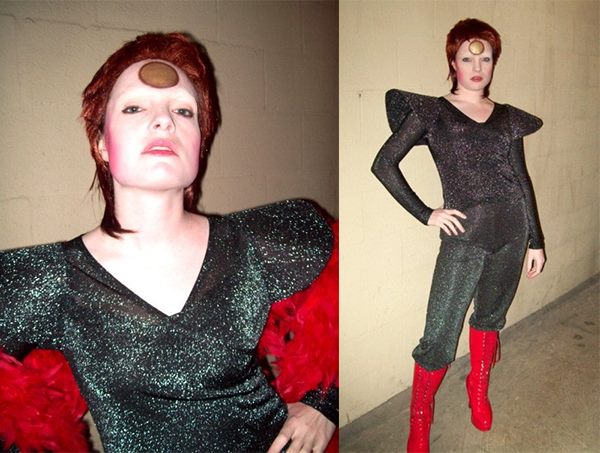 David Bowie is my favorite musician and I love his glam rock phase, so for Halloween one year (2010, maybe?) I decided to throw together a Ziggy Stardust costume. This was before I knew how to use a sewing machine, so most of the costume is comprised of some glittery thrift store finds thrown together. The only real work I did on the outfit was cutting up a skirt for fabric and wrapping it around some craft foam to make the shoulders. The wig is by far my favorite part. It started out as more of a Tina Turner style, but I cut it down quite a bit, and because it wasn’t red enough, I used a Sharpie to color it. I attempted to conceal my eyebrows, using the glue stick method, but had trouble getting them perfect – it’s definitely something that takes some practice! I’d really love to wear Ziggy to a con some day, but I’d want to remake the entire jumpsuit from scratch, using a fabric that’s more accurate to what Bowie actually wore.

(Meg was also featured in Summer Cosplay Series 1×9 – her Squirrel Girl and Starbuck cosplays are must-sees!)

Becca
as a Ventriloquist’s Doll 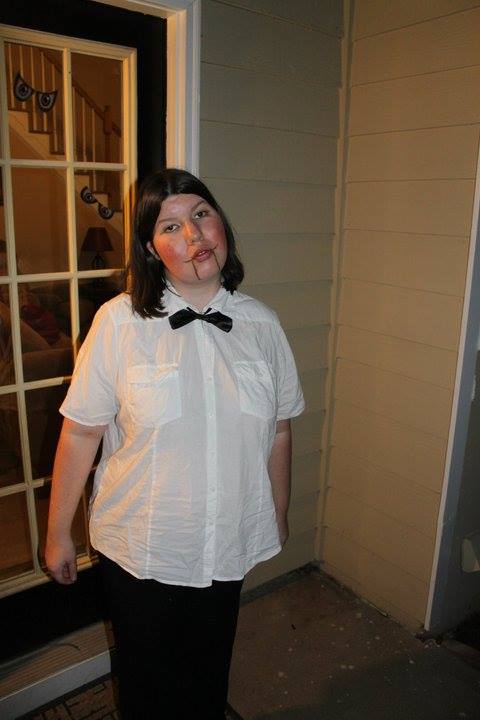 My favorite Halloween costume had to be the year I made a Ventriloquist doll for my own Halloween party in 2010. It’s one of my favorites because it was so completely random, but in my opinion also creative and original. The make up was also a first, was fun and a bit of a challenge. The best part of all is that I already had most of the costume in my closet, which I think is always the most fun and creative when you have things in your own house and can come up with something awesome. The only thing that I had to buy were the suspenders and bow tie; needless to say this was before Dr. Who became really big, so that was sort of a challenge. To  be fair I did start out the costume as a puppet, but the puppet wasn’t working well, so I switched it to a Ventriloquist’s Doll. Either way I think it turned out awesome!

Dani of Dani Kay Costumes
as a “Sexy” Giraffe 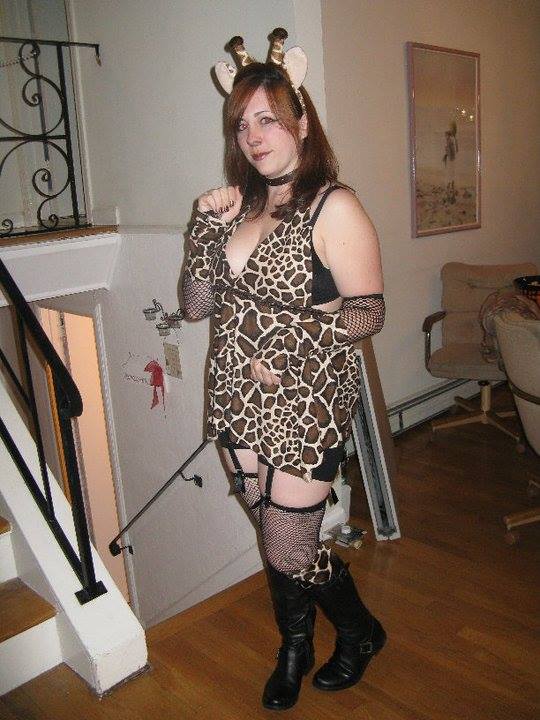 My favorite Halloween costume was my Sexy Giraffe. It started out as a joke because of my obsession with giraffes, and today’s market always turning everything they possibly can into a sexy costume – so I decided to make my own “Sexy Giraffe”. I designed/pieced it together myself and made everything that’s giraffe-print…except for the ears!

Laura
as Lulu from League of Legends 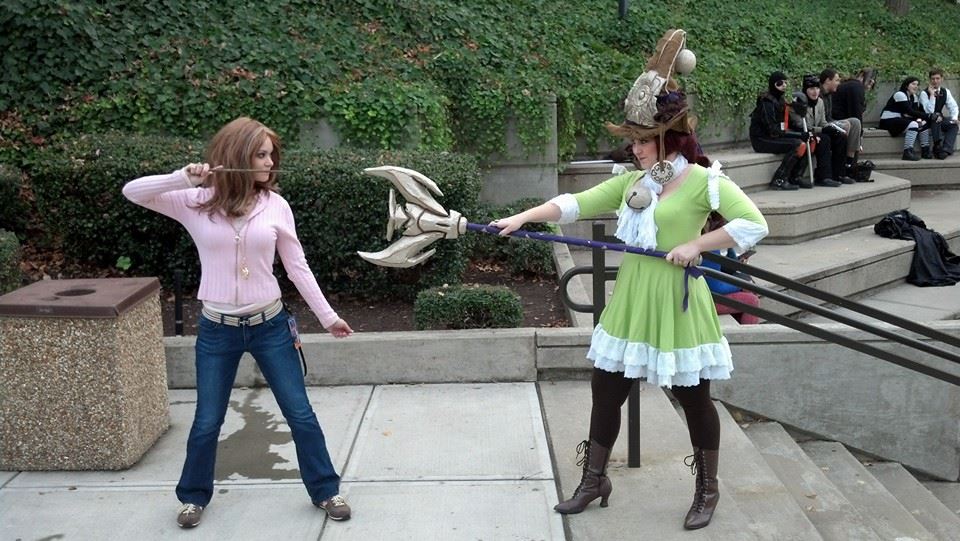 Some time ago I decided to cosplay Lulu from League of Legends. Being a shorter girl, a lot of regular video game characters are a stretch for me. Lulu is fun, adorable, and SHORT! This little witch turns her foes into tiny derpy dragons. I wore this costume at several conventions and for Halloween in 2013. The trickiest part was the wig. It’s made of a disassembled red wig, wire, clear tape, and spray adhesive. The hat is a re-purposed Sorting Hat with a lot of customized design work.

Elendriel & Friends
as Eren, Mikasa, and Armin from Attack on Titan 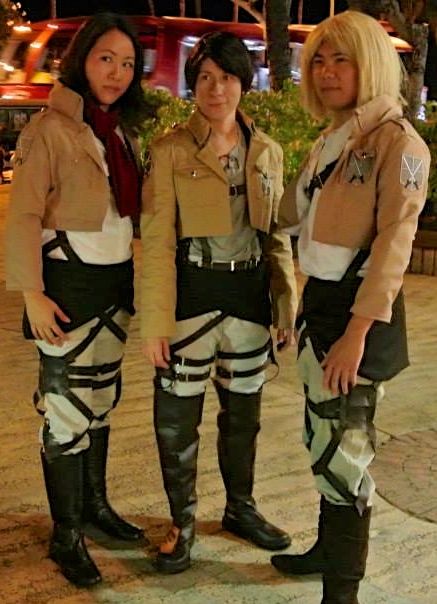 We went as Eren, Mikasa, and Armin from Attack on Titan to the Halloween celebration in Waikiki last year, and it was so much fun. We wanted comfortable costumes that could withstand the hotter temperatures, so we spent the week before Halloween cutting out patterns and straps and putting these together. They ended up going over even better than we had hoped – tons of people, especially the Japanese tourists, wanted photos with us. Overall, it was one of my favorite Halloweens!

Be sure to check out some of these featured cosplayers in the links provided, and have a fun – and safe – Halloween! 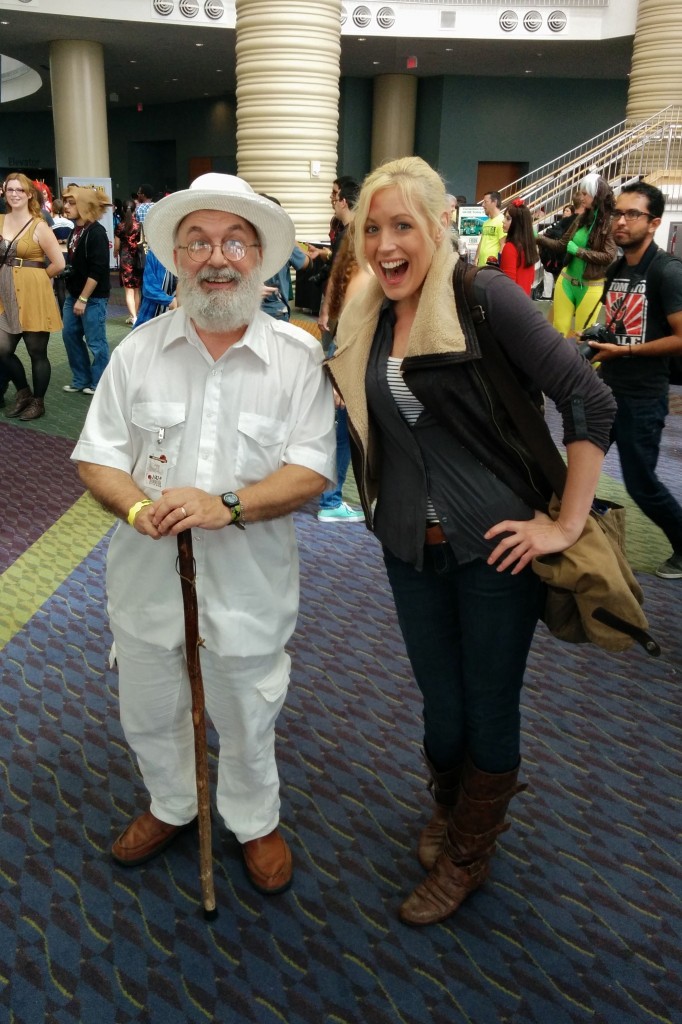 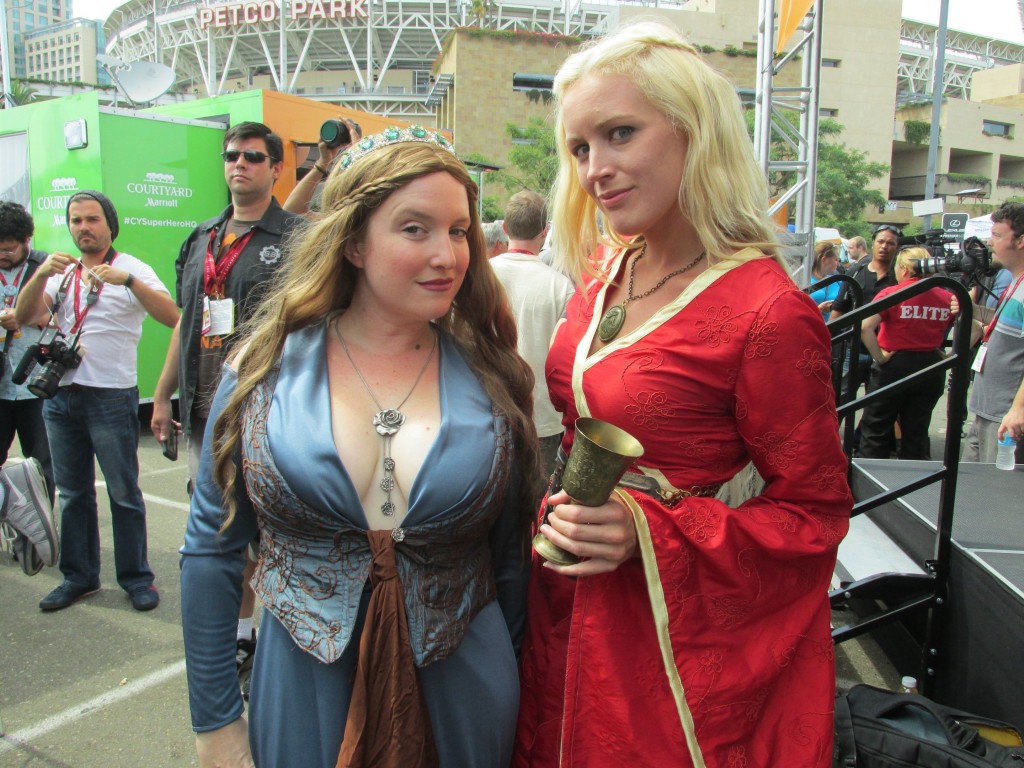