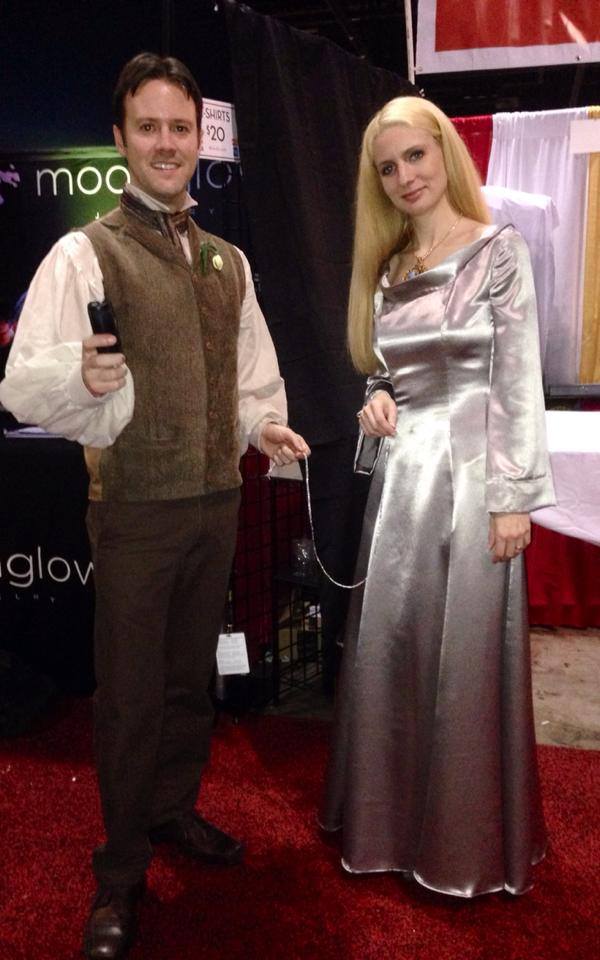 Summer is almost officially over, and with it comes the end of our first cosplay series at The Geekiary! Our last interview features Tammy, and because her husband Ian cosplays along with her more often than not, we get to hear a bit about cosplaying as a couple.

Additionally, Ian is a graphic designer and they travel to several conventions a year selling t-shirts and more featuring his designs…but not only that, they cosplay basically the whole time as well! 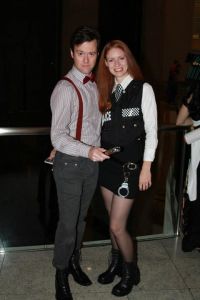 We put together our first cosplay for Dragon Con 2012.  Ian had been invited to exhibit alongside the Southeastern Browncoats as a guest artist.  Neither of us had ever attended a sci-fi convention, but we knew that cosplay was a big part of it and we wanted to immerse ourselves into the culture.  We had just a couple weeks’ notice, so we did our best to gather up pieces for an 11th Doctor and Amy Pond cosplay.  I was a relatively new Dr. Who fan at the time and had no idea that the show had such a strong following.  I didn’t expect anyone to even recognize our cosplay, let alone cry out “Amy Pond” and ask for my photograph every time I left the booth for a break.  I remember doing laps around the Marriott every night along the “Cosplay Promenade” with the biggest smile on my face.  I had never seen anything like it.  The people were all so accepting and gracious, and the energy was amazing.  The entire experience fueled my interest in pursuing cosplay further.

Since that first convention, we have returned to Dragon Con each year and added a couple other conventions to our schedule, exhibiting all day in full cosplay and soaking up the late-night culture each evening.

I had never used a sewing machine before I started working on the bodice for my Xena cosplay in March 2013.  Now that I’ve broken the crafting seal, we try to make every piece of our cosplay – with the exception of shoes.  Since we do cosplay in our vendor booth all day, good footwear is really important. 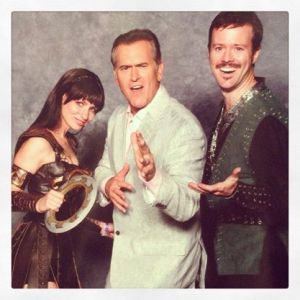 I have been a huge Xena fan since the 90’s, so I’d have to say Xena for me.  It is an empowering costume, and I’m really proud of the craftsmanship.  When I first debuted the costume at Dragon Con 2013, a long-time Xena cosplayer mistook the costume as having been purchased through a well-known Xena replica costume site, which was a huge compliment to our crafting skills.

Ian’s favorite costume has to be Batmanuel, because who doesn’t want to wear that awesome codpiece?  Ian is very good at “becoming” the characters he cosplays, and being Batmanuel is probably the most fun a person can legally have in public.

Edmund and Queenie from the second season of Blackadder.  We enjoy creating costumes from the characters that we love, and these two are very close to our hearts – I can’t count how many times we’ve seen the series.  Ian and I are meticulous about recreating every intricate detail of the costumes we make, and I’m afraid the embroidery on these two costumes would defeat us in both time and patience. 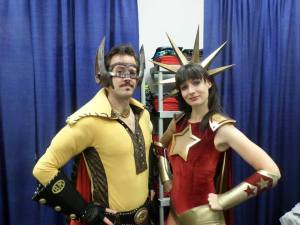 Ian is a self-employed graphic designer and sells his own line of fandom inspired t-shirts both online and at a handful of sci-fi conventions.  He documents the creation of some of our cosplay on his Facebook page, explaining what processes did and didn’t work and giving mini tutorials on the creation of various props.

Did cosplay lead to those, or the other way around?

Ian had been selling t-shirts for about three years when we were invited to exhibit at Dragon Con in 2012.  Cosplaying has helped promote his t-shirt line both online and at conventions, as his Facebook fans seek us out to see our final costumes.  Also, not a lot of vendors participate in cosplay throughout the day, so this helps get the attention of passers-by and earn us new fans. 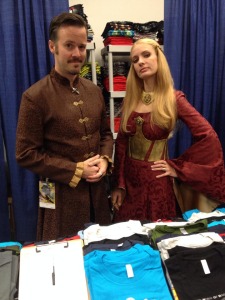 Dragon Con is the ultimate sci-fi convention to us, and we’re thrilled that we live close enough to attend regularly.  It’s like a giant Halloween party where everyone is your best friend.  Although we cosplay at other conventions throughout the year, we create our cosplays with Dragon Con in mind.

Don’t be afraid to fail.  I usually re-make everything at least once before I’m happy with the final product. Sometimes you have to experiment with materials and processes to find the one that works best for your current purpose.  This isn’t wasted time – it’s a learning process, and you will use what you learned from your failures on a later project.  Just be sure to give yourself adequate time to make mistakes.

I wish there was less emphasis on professional cosplayers by the media.  The people chosen to represent cosplay are not generally the typical cosplayer; for example, people who dedicate tireless nights and weekends to creating a costume not for fame, glory or wealth, but just to be part of something fun.  Cosplay is not generally competitive or judgmental as commonly depicted by professional cosplayers, but a culture that cultivates creativity and acceptance. 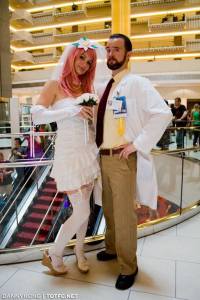 It’s really fun when we get the chance to interact with the actors that inspire our cosplay.  The first time this happened was at a small convention in Asheville in 2013 when I met Lucky Yates (the voice of Krieger on the show Archer) while wearing my  “Krieger’s Bride” cosplay.  Ian was working the booth and I was wandering around looking for food when Lucky came running up to me,  excitedly explaining who he was.  I was so nervous that I just mumbled something about my husband being Krieger and scuttled away.  We later met up with him again, and I was better composed.

We have since tried to seek out photo opportunities with our actor counterparts.  So far we’ve collected Lucky Yates, Lucy Lawless and Bruce Campbell.  I’m really excited to someday meet Nestor Carbonell to see if Ian can out-Batmanuel him!

…and with the end of this interview, our Summer Cosplay series is wrapping up for the year…but stay tuned, as we will be doing our best to once again feature more fun cosplayers sometime in the future!