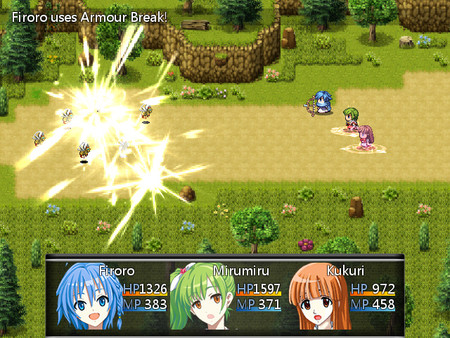 If you have some time to kill and you are in the mood to play a very casual fantasy RPG, you should check out The Adventure of Magical Girl. It is currently available on Steam at an affordable price.

I was provided a free copy of The Adventure of Magical Girl for review on Steam/PC. The opinions are my own.

The Adventure of Magical Girl (TAOMG) is from a one-man indie Chinese studio Windward_Birds. I found out it is a sequel to The Legend of Bean. I haven’t played The Legend of Bean, but I don’t think it took away from my enjoyment as I progressed through TAOMG.

You can see the game design is anime-inspired. Upon starting this 8-bit-like 2D role-playing game, you take control of a witch named Firoro. She then meets up with Mirumiru and Kukuri. Firoro is the ranger of the group, Mirumiru is the warrior, and Kukuri is the mage. Each character is able to unlock special abilities as they level up.

From what I could understand from the story, the three young magician students are on the run from their school’s principal. They also end up saving mankind from monsters.

The gameplay is quite short. You should be able to finish this title under 5 hours. The turn-based combat is easy to understand. You can attack enemies with your character’s basic attacks or use their special abilities (which consume MP). You can also make the characters wear and equip various items to increase their stats.

One of the things I liked is how enemy encounters aren’t random. You will see different creatures roaming around the map. You don’t have to fight unless you bump into them. I would have preferred each enemy to show a health bar. Not knowing how much longer you have to fight an enemy to win a battle can get a bit tedious, especially when you are facing stronger opponents.

The translation from Chinese to English isn’t the best. Expect many grammatical errors. However, in a weird way, it adds to the overall fun this title offers.

The Adventure of Magical Girl is currently available on Steam/PC.