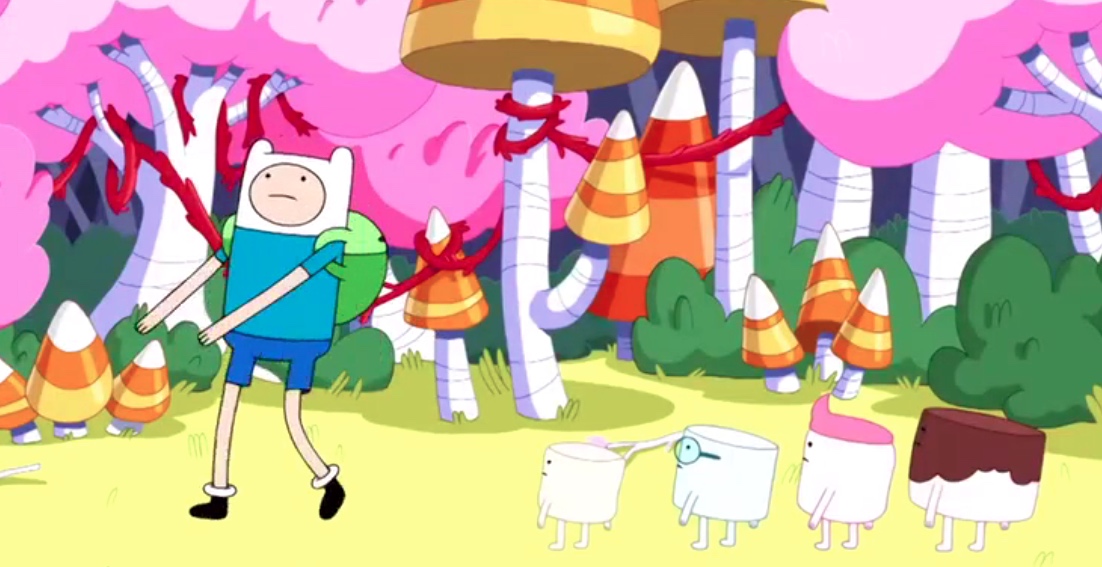 One thing is certain: Adventure Time’s “Scamps” Will Leave You Wanting S’more.

The beginning of this week’s episode of Adventure Time felt like a blast from the show’s past. Finn and Jake are working the Candy Kingdom beat under the watchful eye of Princess Bubblegum. But after they catch the scamps named in the episode’s title, this episode takes a turn much like the series did, featuring an increasingly mature Finn and exploring deeper moral ideas, all while maintaining its sense of Adventure Time whimsy.

I appreciate that much of the last several episodes have featured more of Finn and Jake, both as a duo and as separate characters. I have few complaints about the recent end of the sixth season or the eight-part miniseries Stakes this seventh season, but neither of those arcs focused on our two main heroes. While “Scamps” was more of an episode about Finn than it was about Jake, I had a good chuckle at Jake’s police car-themed shapeshifting antics, as well as the references to his criminal past.

It was Finn who really shined in this episode. Where three seasons ago he tried to make fire by writing “fire” in the dirt with a stick, nowadays he’s mentoring at risk Candy Kingdom youth in all kinds of wilderness survival skills. While he was disheartened when he was deceived by the Marshmallow Kids, all it took was a nudge from Princess Bubblegum for him to try again. Besides getting such a nice reminder of Finn’s emotional progress, it’s good to see him and Princess Bubblegum fall back into their former friendly team dynamic.

Speaking of our recently reinstated confectionary monarch, she had some very interesting fashion choices this episode, featuring high-waisted shorts, a neckerchief, and a new avant-garde hair cut. She also seems like she’s been lifting (trying to impress Marceline, perhaps?)… 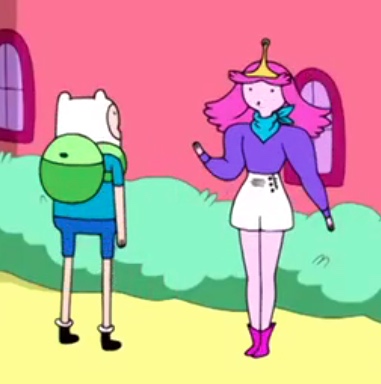 “Scamps” was boarded by Kent Osborne and Somvilay Xayaphone, who have previously worked together on such episodes as “The Eyes,” “The Monster,” and the “Holly Jolly Secrets” two-parter. Like those episodes, “Scamps” is fast-paced and hilarious, full of wholly original character concepts, even if it’s not as hard-hitting in terms of emotional depth. One thing that did stand out to me about this episode was the design of the candy forest. It was a gorgeous, riotous palette, evoking both Candyland and Dr. Seuss.

I am a bit confused as to when Finn was supposed to have been a scamp like the con artist Marshmallow Kids – we’ve been following his character since he was ten years old, and he’s always been a do-gooder. Even in this episode, he couldn’t maintain the facade he had put on to trick the youths. Of course, they’re so impressed that Finn “scammed” them into camping, they reform anyway.

I noticed one small bit of larger lore that they managed to sneak into the episode. When the Marhsmallow Kids were in their classroom, “scamming these numbers into subtracting themselves from each other” and “getting rough with this book… into puttin’ thoughts into [their] head. For nothin!” we see a globe with a sizable chunk blown out of it. We’ve seen this image before, but to see it so definitively three dimensional emphasizes the nuclear destruction that caused our Earth to turn into the future we see in Adventure Time.

While the plot wasn’t particularly exciting, the throwback feel, the jazzy score, the humor, and the heartwarming interactions of Finn with the candy kiddies made “Scamps” a great episode overall.