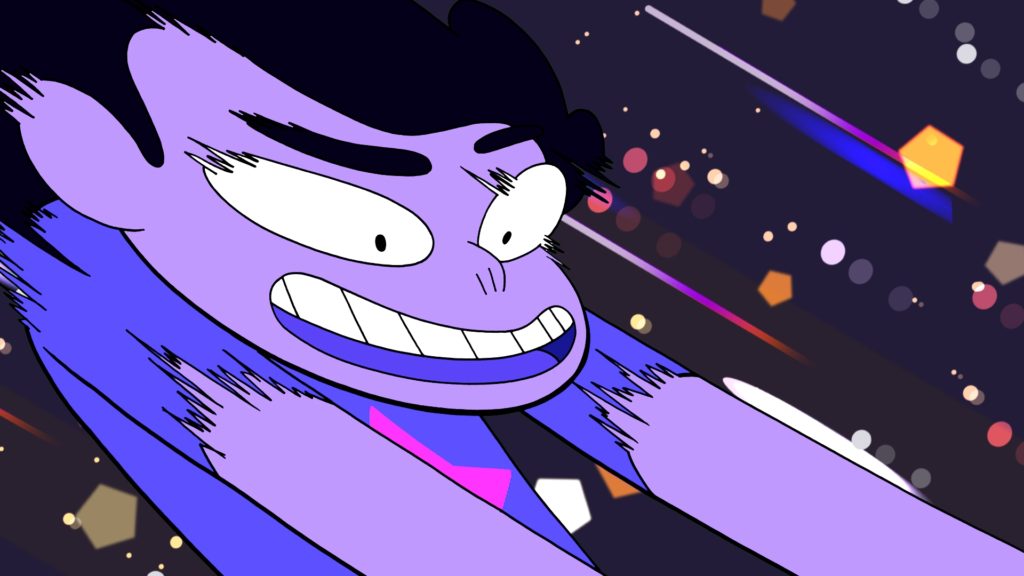 Whenever there’s a big, dramatic arc going on, you need at least one lighthearted episode to give the viewers a break and throw the heavier emotions into relief.  “Adventures in Light Distortion” is that episode, a chance for the storyboarders of Steven Universe to really stretch out with silly expressions, wacky physical comedy, and wild animation styles.

And of course, in true SU style, it’s also the episode where Steven has his worst emotional breakdown since “Mindful Education”.

Before that happens, Garnet and Steven return to the house to tell Pearl and Amethyst that Blue Diamond alien abducted Greg. “Amethyst, turn into a chair, I need to sit down,” says Pearl, distressed that Blue Diamond took “their” Greg (despite the direness of the situation in this episode, it’s a continued delight to see her improving companionship with and general pride in her erstwhile romantic rival since they talked things out in “Mr. Greg”). The Gems decide that the only place Blue Diamond would have taken Greg is Pink Diamond’s “insidious human zoo.” Sounds like a swell place to spend a vacation.

They hop into the rubies’ Roaming Eye and blast into space. With Pearl and her sweet moves at the helm, they navigate some space turbulence, including a few of the rubies themselves (Steven even promises they’ll pick them up on the way back). Pearl explains in a chipper tone that at their current speed they’ll reach the zoo in approximately 70 human years, “just in time for Greg’s 110th anniversary of being alive.” Unless Pearl was just approximating, we now know that Greg is 40, and since Steven is 14, that means he was only 26 years old when Rose Quartz gave up her physical form.

Steven, reasonably, won’t wait that long, and decides the reality-bending gravity engine is worth the risk on his organic half since it will take them to the human zoo much faster. We are treated to a sequence where the Gems are distorted through a series of shapes akin to a funhouse of physics – Ruby, Quartz, some kind of Gem tinier than any of the Shorty Squad, even behemoth Diamond-size – and then he presses a button that warps them into faster than light speed. The Gems’ physical forms, being made of light, can’t keep up and vanish, leaving only their actual gemstones pressed against the back of the ship. Like a spinning carnival Gravitron ride, Steven can’t lift his arms forward to stop the ship from colliding with the zoo. Here is where his breakdown occurs, and it’s heartbreaking. Once again he’s alone in space, desperate and close to death. He just wants his dad, and finally finds strength enough to stop the ship just in time.

If there’s any lesson to be found in “Adventures in Light Distortion”, it’s about the importance of staying calm and thinking things through, even when in a stressful situation. Here, Steven was so terrified for his Dad and guilty about what happened to him that he rushed the rescue mission without taking time to prepare. He could have waited for Connie and gotten some extra backup; he could have let Peridot adjust the Roaming Eye a little more; he could have just left the gravity settings on ‘ruby’, since having all the Gems be tiny wasn’t actively hurting anyone. But he jumped the gun, and almost got everyone killed. A painful lesson, but an important one, as Steven continues to step into a leadership role.

Speaking of Connie – something interesting set up in this episode seems to be Connie, Peridot and Lapis being prepared to act as a ‘B-Team’, ready to defend Beach City and the Earth if the Crystal Gems are otherwise occupied. Considering how the entire narrative has so far been tied exclusively to Steven’s point of view, it will be interesting to see if and how this is utilized. It would also be very exciting to get to see Connie interact with the Barn Mates.