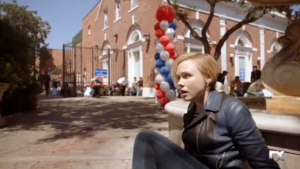 Trust no one. Believe nothing. Everything, yes everything, connects back to the cult.

It is important to note that the intro to the sixth episode of the seventh season of American Horror Story: Cult was edited. Due to the opening events being a mass shooting and the events of Las Vegas still being fresh in the minds of many people, the intro was edited down to its main plot points. These plot points being: Kai being shot, Ivy experiencing the chaos, and Ally being shown taken into police custody while holding the gun. Removed were people being gunned down around Ivy, and a man dying in her arms, all events some people recently experienced.

This is a decision I respect, though the end of the episode which recounts the shooting, does not take the same light treading. The show is not known for its sensitive handling of subjects such as violence, mental illnesses, or being entirely the most politically correct. Allowing the show to be edited on such short notice to respect those who have been affected by the recent mass shooting is definitely the right step.

After Ivy experiences the shooting, it is immediately obvious the shooting was staged by Kai. The charismatic cult leader has shown before he is willing to take a few fists to twist the truth to get people on his side. Having someone shoot him only feeds into his martyr complex that allows more people to feel invested in his cause. People are obviously trying to silence him because he is right, right? “Mid-Western Assassin” ends up in most parts being just as transparent as previous episodes.

The rest of “Mid-Western Assassin” is a flashback, explaining some of the events in previous episodes such as why Meadow suddenly became a target, where she went after she was kidnapped, and even detailing more of Ivy’s involvement in the cult. Finally, viewers get some answers for questions that have been around all season. Some of the answers seem to come too late, or have been ruined by the transparency of the plot this season. Regardless of how they come though, these answers have been sorely needed.

After escaping Harrison, Meadow bangs on Ally’s window, explaining everything to Ally. Meadow tells her not to trust Ivy, who is part of the cult. This is a call back to last episode, and still feels as unnatural and staged as before. It is hard to believe Meadow is in any real danger from the cult. Ally’s distrust now extends to Ivy, who she hangs up on after Meadow is dragged away. Since no one believes what Ally is experiencing or what Meadow told her, Ally decides it is on her to go rescue Meadow.

Sneaking into the house, Ally finds Harrison and the police officer in the cult having sex, then sneaks Meadow out of the garage (not so quietly) and brings her back to the restaurant to talk to her and figure out a plan. This is where the viewers get some answers, especially the answer to what was going on with the gas trucks in episode 3. According to Meadow, these trucks were just spraying water and the dead birds came from poisoned bird feeders. The trucks were meant to drive people into fear and paranoia as to what was going on with their neighborhoods and government.

The fact this goes back into Kai and is not a subplot is a wonderful thing to see. This season is without subplots, with everything connecting back to Kai and the cult. Focusing on one central idea and plot allows for a more developed idea that creates and instills paranoia in the viewers that would not be possible with convoluted subplots. Allowing for the plot to connect back to each other allows for a more enjoyable season, even if the characters are not the greatest in their development. While the plot for season 7 is not without its issues, the lack of subplots allows it to avoid some of the pitfalls of previous seasons in absurdity (American Horror Story: Asylum aliens) or having to rush to finish existing arcs (American Horror Story: Freakshow).

Viewers also get to learn why Meadow became a target for the cult as opposed to a member. Kai is a manipulator who will tell anyone whatever they need to hear to make them feel special and part of the cult. His words will twist what the person fears most and use it against them to make them feel connected to and loved by Kai. Each person and each part of the cult has a special connection to Kai, such as how Kai treats Beverly as an equal. Kai treats Meadow like a lover and as someone who is special even among the other cult members. However, Meadow sees through this when she catches Kai telling Ivy the exact same thing he told her previously. Feeling slighted, hurt and used, Meadow tries to leave which puts her in the situation that Ally found her in. 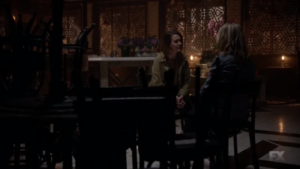 A nice romantic dinner on the run.

Everything about Meadow’s story, while believable, also feels too clean. If Kai really thought Meadow was going to leave and potentially jeopardize the whole cult, he would have killed her. Kai has shown before that even a small amount of wavering faith can result in several nails to the head. Kai is also extremely methodical and thorough; there would have been no chance that he would have accidentally left Meadow alive. Or is this all paranoia? If there is one thing that this season as well as “Mid-Western Assassin” does, is it makes the viewer question the motives of everyone. Trust no one. There is an ulterior motive for everything, and it all connects back to Kai.

Another even further flashback brings us a frantic Ivy talking to Winter. She is concerned that Gary is going to tell the police that he was kidnapped and handcuffed. Ivy also feels responsible for his now missing hand. Winter brings Ivy to Kai, telling her that Kai will make everything alright. This scene answers two questions, how Ivy really got involved with the cult and why Ally is being tormented at such great lengths. Kai makes Ivy pinky promise and we learn that Ivy is extremely jealous of Ally for having carried and breastfed Oz, often calling him “her” child. Ivy now resents her wife and Kai promises that she can have not only his “hot, young” sister but also her son.

The point of Ally’s torment has been to drive her to the brink of being committed so that Ivy can be guaranteed custody of Oz. Ivy also describes Ally’s fears as “bullshit” and “privileged”. This sentiment reflects how most people see outlandish fears, such as Ally’s fear of clowns. However, this scene also proves to blame Ally’s mental illness alongside her voting for Jill Stein (and the issues with the mothering of Oz) for why Ivy is becoming radicalized and falling in line with Kai and his cult. Blaming Ally’s mental illness as one of the reasons feels like a cop out as well as a rushed footnote that could have been done without. As is with Kai’s constant pill popping (and how this episode opens), this season continues to portray mentally ill people as a pain, burden, and violent.

During a town meeting or rally, Kai is spouting about fear and how crime is on a rampage. That is until someone stands up to him, calling out his fear-mongering and bullshit statistics with facts. Sally declares she is running against Kai at this very same meeting, proclaiming that people like him and Trump are flies as opposed to the actual garbage that needs cleaning up. 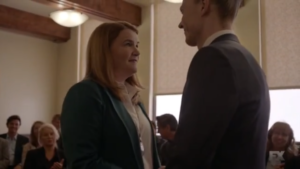 Sally isn’t taking any of your shit, Kai.

The moment Sally steps up to Kai and proclaims she will be doing him a favor and he should thank her, there are suspicions about her. Is she another pawn in Kai’s plan? How does she connect to Kai’s greater picture? For Kai, there are almost no random elements that need to be addressed. Her appearance in the season seems too well-timed and too perfect. Kai now has a rival and someone to overcome, a way to make it seem like he is more legitimately trying to acquire his seat on the city council. Sally is seen again after Ally leaves Meadow with her psychiatrist to go talk to her and tell her about the cult her opponent is a part of. Ally feels Sally is the only person she can trust with this information.

Despite Sally’s strong speech against Kai, her character is once again plagued by the problems all the liberal-leaning women characters are. They are all stereotypes pulled off the internet of what men think radical/liberal feminists are. Even her words about the way the world functions and toxic masculinity feel taken off Reddit posts in subreddits mocking feminism. It doesn’t help that the whole time she is talking about men and their inherent lack of developed characters, she is rolling a blunt. Ryan Murphy cannot write good feminist characters, at least, not in a role speaking directly on such matters.

Soon after her feminist speech, Kai and co. show up to remove the competition. This dashes the idea that she was part of the cult, for now. While I know the cops (at least some of them) are in Kai’s pocket, there has to be some form of official or something that sees all of these clearly connected cases involving Kai and will investigate him and the cult, right? This is a fictional TV show, but some things seem too far-fetched to continue without creating glaring issues in the story.

“No one will believe that!” Sally cries as she is held down by Kai’s clowns, with Kai typing a fake suicide letter on Sally’s facebook. “Of course they will,” Kai responds. “It’s on Facebook.” This is not only a callback to the meeting of Kai and Ally in previous episodes but a social commentary on how people will believe anything on social media without thinking about the person or the cause for the post. Another fake news jab without actually using the words fake news. This falls hand-in-hand with Kai’s statements about how knowledge is useless now and how the younger generation doesn’t want to know, they want to feel. This shows either how out of touch with the word Kai is, or even potentially Ryan Murphy. Knowledge is the name of the game for the younger generation since it is so easily accessible and abundant. News, facts, and resources are at everyone’s fingertips and the younger generation seems to be the only ones ready to pull it up to prove a point.

The episode ends with a big reveal, showing that Meadow was still working with Kai. Her story was entirely bogus and was a way to frame Ally for the shooting at the rally. Ally was simply trying to stop the “Mid-Western Assassin” as she shot Kai and then shot random people at the rally before killing herself as Ally tried to wrestle the gun from her hands. Her murder-suicide is a profession of love as well as a way to get Kai access to the rest of the world, framing it as an assassination attempt. What better scapegoat than a mentally ill, clearly delusional woman, right?