Are You Worthy? “Court of Fives” by Kate Elliott 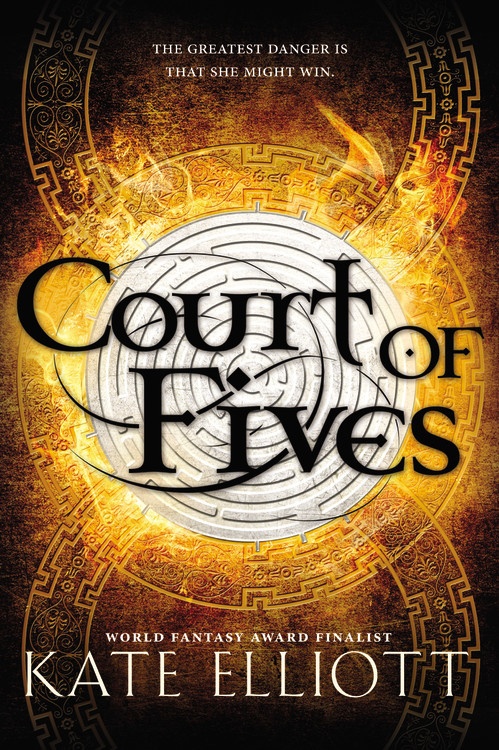 I’m very intrigued by the world that is introduced in Kate Elliott’s Court of Fives – a world where the ruling class of light-skinned Patrons and the lower class of darker-skinned Efeans are forbidden to intermarry, among other things. We catch glimpses of this world as main character Jessamy struggles to save her family from a vindictive Patron lord who is out to destroy them, but we also get some indications that everything Jessamy knows is a lie. This information comes far too close to the end of the story to truly be explored and as such felt very shoehorned in.

Court of Fives was one of the five galleys from BookExpo America that I couldn’t wait to read, and for the most part, I enjoyed it. However, once the plot started in earnest, it felt like two stories trying desperately to coexist and not really succeeding. Either plot would have been enough for a book on its own; together, it almost felt like too much.

On the one hand, you have the story of Jessamy – the half-Patron, half-Efean daughter of a famous Patron soldier who wants nothing more than to race in the Fives, despite the shame it will bring to her family. Patron ladies aren’t meant to compete in the Fives, and though Jessamy and her sisters have never fit into the noble class because of their mixed heritage, they must act as though they are Patrons so that they do not dishonor her father. She sneaks out to compete in a race but loses on purpose, drawing the attention of Lord Kalliarkos, heir to the throne, as well as his uncle Lord Gargaron.

On the other hand, you have a story of political intrigue, as the nefarious Lord Gargaron begins to manipulate things to his advantage – placing both Jessamy and her father into no-win situations that mean they must betray the ones they love in order to save them.

As this is a trilogy, it’s difficult to determine which plot arc will take precedence in later books – though I suspect it will be the latter story of political intrigue. The seeds for that story were sown too late in Court of Fives to simply be abandoned, so it makes sense that they will be explored as we continue on through the trilogy. As such, I can understand attempting to introduce it in the first book so that readers aren’t hit over the head with it in following installments (as so often happens in trilogies, especially in YA). However, I don’t think they were intertwined extremely well.

The love story between Jessamy and Kalliarkos starts off a little clunky but I thought it became more organic as the story went on. Their relationship did not feel like the stereotypical “insta-love” that tends to permeate YA literature. They interacted a lot and their feelings grew because of it; they came after the fact, which was refreshing. After the way the book ends, though, there is no telling where their relationship will go.

Sadly, Jessamy’s sisters (and at times even her parents) have very little characterization, and seem to exist simply just to be there. Jessamy comes across as very selfish and single-minded. Throughout the book, she is floored by various revelations about her sisters. Considering their situation, and how they are “too good” to be commoners yet “too low” to be Patrons, I assumed Jessamy would have a closer relationship with her sisters on the basis of not having many other friends. It’s a shame that this isn’t the case, because ample opportunities existed to really get into the class differences, as at least one of her sisters can “pass” for Patron and one of her sisters is physically disabled.

Keeping in mind that Court of Fives is both the first book in a trilogy and the author’s YA debut novel, there is a lot of promise here. Something I have always loved about dystopias and fantasies, particularly YA ones, is the chance to explore the different politics and societies of fictional civilizations. The world of Court of Fives is a fascinating one, and I’m excited to return to it.

Court of Fives by Kate Elliott is published by Little, Brown and Company, and is available today wherever books are sold.

Previous:Junjou Romantica 3×6 Review: A Bolt From The Blue
Next: Turning the Spotlight Around: An Interview with Captain Kyle