Arrow 3×07 Review: Draw Back Your Bow 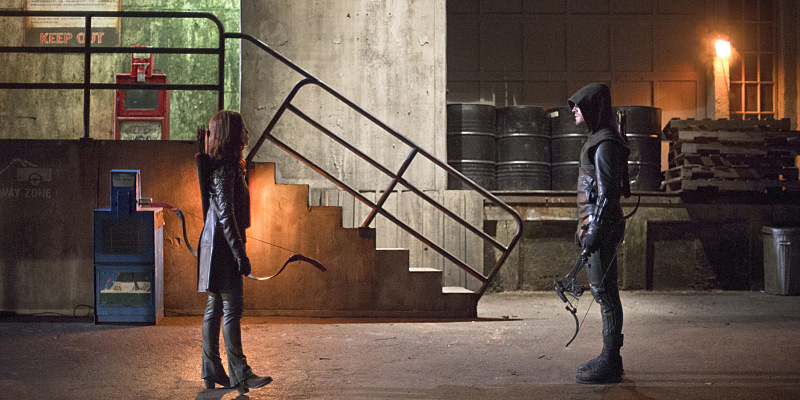 I’m going to begin this article by saying that while I usually research new characters who pop up in Arrow, I have not read the source material. It was pointed out to me that this was very obvious; to be honest, I’ve never been a big fan of DC’s comics or characters, but also it’s admittedly a nice change for me to watch a show without constantly comparing it to the original medium. So show of hands: who out there loves CW’s version of Arrow but has not read the comics? Please comment and let us know!

That said, “Draw Back Your Bow” kicked off with a flashback to the days when the guys hopped up on Mirakuru were running rampant in Starling City and Oliver paused on his way to save the city to take down one of said bad guys. Back in the current timeline, they cut to Captain Lance showing Oliver the body of last week’s villain, Isaac Stanzler, who was trussed up to look like our green-hooded vigilante and left with a spade-tipped arrow. Now, it was easy to figure out that “Cupid” from last week’s episode was in fact the girl Oliver had saved some time ago, and to be honest, I’m still not sure how I feel about that – perhaps a bit more mystery would have been nice? 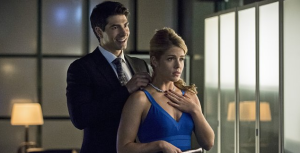 But this week’s episode had a lot going on – almost too much, in fact – so at the same time I can understand that the writers were in a bit of a rush to reveal Carrie Cutter as Cupid’s true identity. There were several side stories in “Draw Back Your Bow”, including some more Hong Kong flashbacks that were of questionable quality, a random DJ trying to sweep Thea off her feet, and a whole lot of Felicity + Ray Palmer (at this point I’m having a difficult time not rolling my eyes at the developments in their relationship).

By far one of the best things about this episode is the fact that the writers made that connection between Cupid (a copycat vigilante with an Arrow obsession) and one of the major season two story arcs. Thankfully they also made quick work of any conjecture that she might be Sara’s killer as well, though in a way that forced them to take a step back in terms of revealing her murderer. 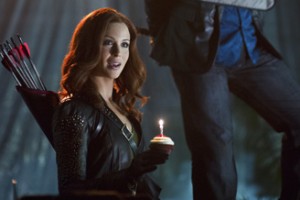 In terms of action as well as in driving the story forward, this was another somewhat disappointing installment for season three, especially with Arrow on hiatus until December 3rd. It was a very character-driven episode, though ,and in that respect the writers did a pretty good job (even if, as I mentioned above, I am personally having a hard time with the Felicity + Ray storyline). Their use of Carrie’s obsession with the Arrow as a way of allowing Oliver to explore his own issues was clever and well-done, and I like the idea that she’s now on the Suicide Squad as it means we may actually see her again. (What, she was amusing!) Not to mention Diggle’s line about how Carrie was “nuttier than the last woman” who was in the Suicide Squad; that being, of course, Harley Quinn, who had a very tiny “cameo” of sorts last season.

The Hong Kong flashbacks still seem more random than anything, though it’s nice to see that with “Guilty” and “Draw Back Your Bow” they are exploring the character of Tatsu, Maseo’s wife. I much prefer her interactions with Oliver to Oliver’s interactions with her husband. But these flashbacks were still one of the weaker parts of this episode, even if they weren’t quite as frustrating as watching Felicity fawn over Ray Palmer.

Thankfully, “Draw Back Your Bow” had a pretty strong close, what with Ray musing over his exosuit design and Captain Boomerang popping in for a visit. Next up, the Arrow/Flash crossover! Is anyone out there in the same boat as I am: hoping to [finally] catch up on The Flash before then?

Previous:Storm #5 Review: Death of Wolverine
Next: Check out Sci-Fi Author A. G. Moye!