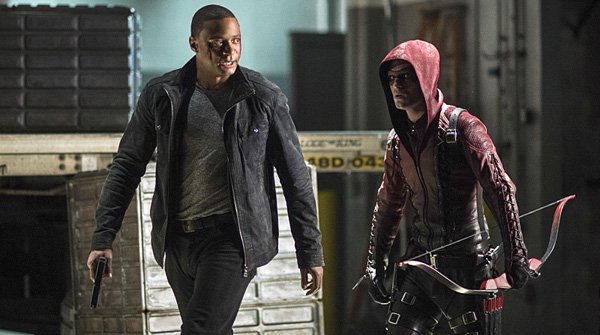 It was almost hard to tell where the recap scenes of Arrow’s midseason finale ended and its midseason premiere began. That said, once it became clear that Roy was on Oliver’s motorcycle and Diggle was in the Green Arrow suit, it all came rushing back.

Until they were back at headquarters and glossing over the fact that Oliver is missing, that is. Felicity spent much of “Left Behind” in outright denial, and while Roy pressed his point here and there, Diggle generally kept his mouth shut – at least at first. I was left constantly wondering whether the episode would ever dig its way out of the hole created by Oliver’s disappearance and his friends’ reaction to it.

The Hong Kong flashbacks didn’t help the situation, either. It was more of the same ol’, same ol’ – Amanda Waller ordering Maseo and Oliver around and getting pissy when things don’t go exactly how she wanted them too – with the added plot point of Tatsu having been captured. In the end, these flashbacks did move that plot forward, but I feel that it was drawn out and messy in accomplishing it. However, I do think that the transitions between the current timeline and the flashbacks were very well done in this episode. 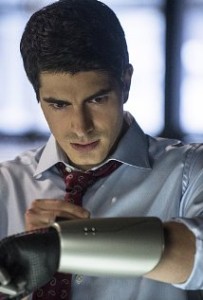 I feel that the Ray and Felicity story line took several steps back this week, and while I understand the necessity of that (now that Felicity finally believes that Oliver is dead), I also wonder if having Felicity make the decision to walk away from the Arrow crew and also refuse to help Ray all at once was truly the best decision. Ray having problems with his suit and Felicity not wanting to take part in his plan to save the city does set the stage for other heroes (or at least one other hero) to step forward.

Even outside of the promo pictures of Laurel as Black Canary, it was pretty obvious from her first appearance in “Left Behind” that she would be that hero – or she would at least try to be. I wasn’t a big fan of the ridiculous panning shot that re-introduced Laurel in this midseason premiere, and the fact that she had only minor appearances throughout the episode didn’t seem like the best way to introduce her as Black Canary. Still, I’m excited to finally see her take on that role and I’m interested in where the show is going to take her. 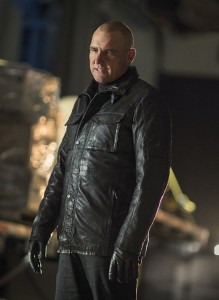 Meanwhile, before Felicity, Roy, and Diggle decided to take their breaks from fighting crime, a new bad guy (Big Bad or just around for a few episodes?) was giving them a run for their money. Danny Brickwell, a.k.a. “Brick”, is aiming to take over the Glades. With Oliver gone and Diggle and Roy just not cutting it, Brick is well on his way to accomplishing that. As someone who hasn’t read the comics, I’m interested to learn about his background and to find out whether he has specific reasons for getting certain people released from prison. I hope there’s more to his story and that we actually get to see it.

While I spent a lot of “Left Behind” wondering when the writers would get to the point, I readily admit that they did a great job with some of the heavier material – especially when it involved Felicity. Emily Bett Rickards delivered some heart-wrenching lines, and she delivered them well. I may not completely agree with the direction they’re taking her character at the moment, but that doesn’t mean I’m not open to it at all. It’s hard not to be when I love Felicity and Emily’s portrayal of her so much.

The main problem with Arrow’s midseason premiere is that they brought Oliver “back to life” far too soon. Of course I didn’t believe that he was actually dead for good, but I think they could and should have drawn out the suspense a little longer. Now I suppose a lot depends on when they reintroduce him to Starling City – and to his family and friends.

“Left Behind” may have left me feeling a bit unsatisfied, especially as a midseason premiere, but I’m definitely glad that Arrow is back and I can’t wait to see what it has in store for us!