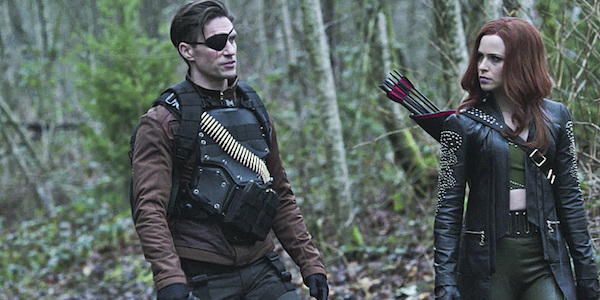 Though Oliver did show up here and there in this episode of Arrow, above all it was about Diggle, Lyla, and Deadshot…and to be honest, it was a nice change of pace from the constant back-and-forth between Oliver and Ra’s al Ghul. (Even if it was a bit predictable that Amanda Waller interrupted Diggle and Lyla’s honeymoon with a Suicide Squad mission.) 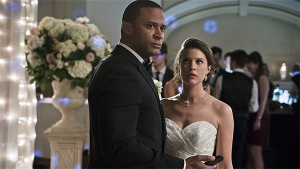 I’ve never really been a huge fan of Diggle and Lyla’s relationship, but I really enjoyed their interactions in “Suicidal Tendencies”. Minus the weirdness of Ray Palmer having to officiate their wedding, this episode was one of their better ones – if a little bit repetitive in terms of their story line. (Really, how many times are they going to do the “we want to do stuff and things together but wait our daughter may end up an orphan if we do” plot?)

It was also interesting that this episode even set aside Hong Kong flashbacks in favor of scenes from Deadshot’s pre-Suicide Squad life. Though they were a bit spottier than I would have liked, it was another nice break from the usual Arrow story lines. 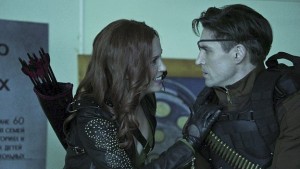 The other Suicide Squad member who made an appearance was Cupid, though to be honest I don’t think she was the best choice for the job. Her sudden switch from infatuation with the Arrow to having a thing for Deadshot – which, yes, happened during the episode – was contrived and, in my opinion, unnecessary.

Speaking of unnecessary, as it turned out the Senator who the Squad was sent to rescue had faked his own kidnapping in hopes that it would help his bid for President. Not my first choice of plot twists, but it all worked out okay in the end – for everyone except Deadshot, that is. He sacrificed himself so that Diggle, Lyla, and Cupid could escape with the hostages, and to be honest that’s the first time I’ve been saddened by the fate of an Arrow character since Sara’s sudden and unexpected demise. Now, most synopses of “Suicidal Tendencies” refer to Deadshot as having “seemlingly” sacrificed himself…but I sincerely hope that’s not the case. While I certainly didn’t WANT the character to be killed off, the idea that he isn’t actually dead doesn’t sit well with me. 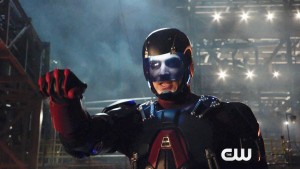 While Diggle was off with the Suicide Squad, Ray Palmer figured out that Oliver Queen is the Arrow, and he was none too happy with Felicity. I suppose that’s understandable, but I really just hate seeing anyone pick on my girl! And later Oliver snapped at her as well, for not telling him about Ray’s A.T.O.M. suit…though Felicity’s reaction to Oliver was a lot more defensive than when she responded to Ray. Definitely a “hmmm” moment for me – not that I thought Felicity would just forget her feelings for Oliver, but the writers definitely seem to be bringing them back around faster than I’d expected (or perhaps just refusing to let it go completely). Of course Oliver made sure to push Ray back to Felicity in the end (sigh), but this push was a *bit* self-serving as it led to Ray finally being convinced that Oliver isn’t the Arrow who is going around killing people.

I almost think that this episode would have been better served as a complete aside from the Starling City plot rather than jumping back and forth as it did, but overall it was still refreshing to get out of the city and away from Oliver and the League for a while. That said, I would really like to know if anyone else has thoughts on whether or not Deadshot actually died!