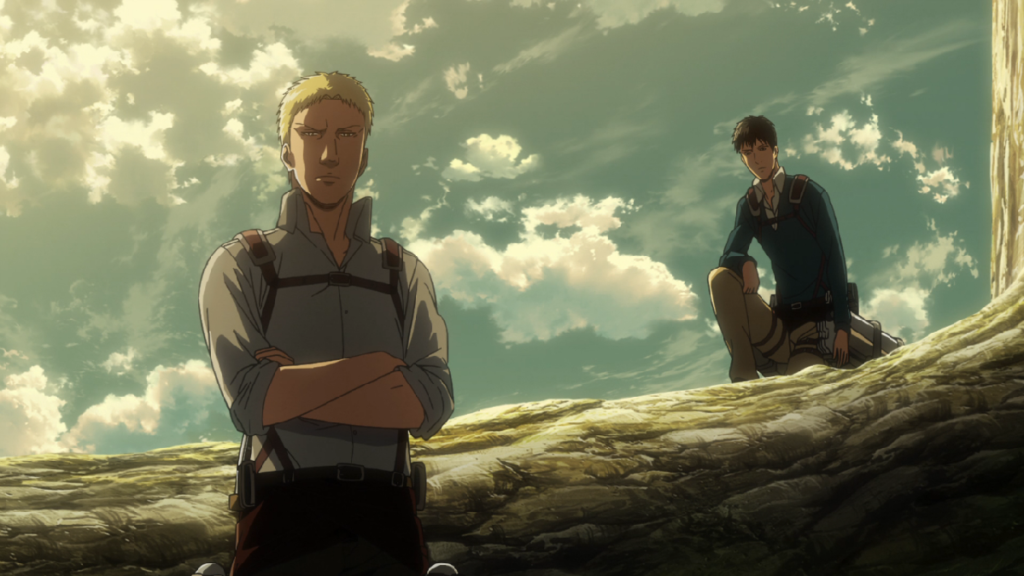 I was hoping for some answers in this week’s episode of Attack on Titan. And while “Opening” did clear up some things (sort of), it mostly just introduced a bunch of new questions.

One thing that “Opening” made clear is that something is up with Reiner. He goes from calmly laying out all the reasons why Eren and Ymir can’t escape to idly wondering if they can all get promotions in the Scouts. Ymir theorizes that the long years of living as a human has split his brain, so that he no longer knows which life is real. Facing the truth of his betrayal, Reiner breaks down. It’s some superb voice acting from Yoshimasa Hosoya, and it makes you really see the strain that Reiner, at least, has been under. Bertolt, on the other hand, though he has always appeared to be more of a follower, trailing after Reiner, seems less conflicted about his actions. He tells Eren that he felt sorry for him when he learned of his mother’s death, but Bertolt doesn’t seem to show any remorse for what he’s done.

The question is how much of a role these two played in what happened. Eren blames them for everything — understandable, considering they appeared five years ago and broke the wall, starting this whole mess — but Ymir recognizes that Reiner and Bertolt are probably not in charge. She quickly deduces that the Beast Titan has something to do with it, but every time she tries to fill Eren in on what she suspects, Reiner interrupts her and changes the subject. It’s unclear whether Bertolt and Reiner know who or what Beast Titan is and are withholding, or if they were just as shocked by its appearance as the others.

In the end, Reiner seemingly convinces Ymir to side with them over Eren by declaring that they can help keep Christa safe. This again reiterates that Christa is important somehow, but we still have no idea why. Ymir is smart, but she’s proven to be reckless when it comes to Christa’s safety. Whether she actually intends to join up with Reiner and Bertolt remains to be seen. She was trying to help Eren for most of the episode, angling to get information out of Reiner and Bertolt, but Eren’s emotions overpowered him and he ruined her fact-finding mission. (Thanks, Eren.) So I suspect that she’s agreed to join with them in order to learn more.

“Opening” focused mainly on the conversation between the Titan shifters in the 104th, but we did have a brief moment with Hange where she was determined to get to Connie’s village. She has a theory (that the villagers somehow turned into Titans, perhaps?), but she needs more evidence. Unfortunately, she’s still too injured from Bertolt’s steam blast to ride a horse, so one of the Scouts vows to go alone. I’m sure that will end well.

The past couple of episodes seem to have been buildup for the massive confrontation that is sure to come (hopefully in this season, and not in the next one). Everyone knows now that Bertolt and Reiner are Titans. We still don’t know their motivations for joining the Survey Corps, or even why they attacked the walls in the first place. This episode left me just as frustrated as Eren. I want some answers!

Previous:Portal Knights – Game Review: A RPG That Will Keep You Busy For Hours
Next: Steven Universe 5×01 Review: “Stuck Together”