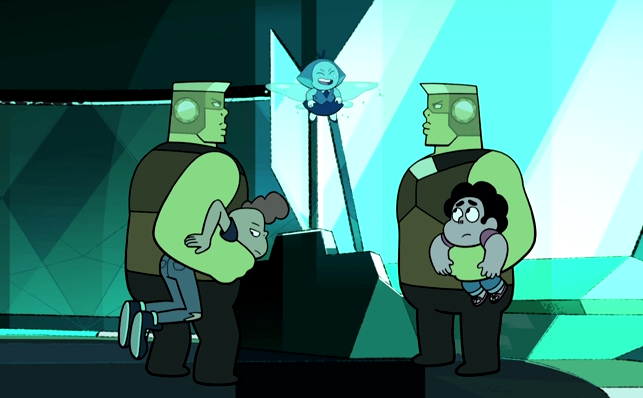 Steven has turned himself in to Aquamarine and Topaz in order to save his human friends. But Lars was left behind, and now he and Steven find themselves en route to Homeworld in “Stuck Together.” 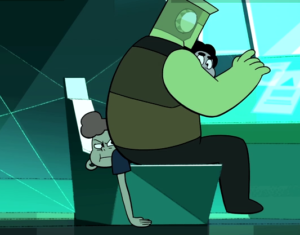 The episode title becomes quite literal when the Topazes fuse, capturing Lars and Steven inside their Fusion’s body (hereafter in this review, their Fusion shall be referred to as “Twopaz”). Based on the events of “I Am My Mom”, keeping beings hostage could be one of the Topaz Gems’ set purposes, since their physical form when fused seems to be denser than average. But that’s not the only thing Twopaz can do. She’s more than just laconic muscle; throughout “Stuck Together” she is instructed by Aquamarine to fly the ship and fix the engine, hinting at a sharp mind beneath that stone face.

The Aquamarine-Topaz duo is a delightful exercise in character building. Aquamarine is as “awful, small, and mean” as she has been since we met her, laughing at Steven’s insults, mocking his convictions about the “deal” they had struck, brushing invisible dust off her skirt. “Is that how you flattered so many Gems into joining your rebellion?” she asks Steven, after he yells at her. Peridot had no idea what Rose’s Rebellion was back when she was still loyal to Homeworld, which means that Aquamarine is either old enough to remember, or important enough to be let in the loop. Either way, the “stone-cold Gem in a schoolgirl’s body” continues to captivate, and this can’t possibly be the last we see of her on the show.

The other focal twosome of “Stuck Together” is Steven and Lars. The title might be a callback to Stevonnie’s first iconic episode, “Alone Together”, possibly continuing to foreshadow a Lars-Steven fusion (along with lines like, “I’m gonna need you [Lars] to be my arms.”) The two humans bicker within the confines of Twopaz, since apparently her Gems (or “big headphones,” according to Lars) means she can’t hear them. Shockingly, Lars is being difficult about everything, thwarting Steven’s every escape attempt. Finally he breaks down. “I’m a wuss, Steven. I’m just– afraid. I’ve always just been stupid and afraid.” 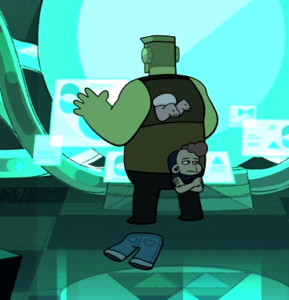 Poor Lars. He is racked with guilt about abandoning Sadie, he confesses he dumped his ube roll before he was abducted in “The Good Lars,” and now he’s being hurled toward an alien planet with who knows what kind of treatment waiting for him on the other side. But Lars is not the only one who is afraid, as Steven tearfully admits:

“I thought if I turned myself in, it’d fix everything, but– I don’t want to do this Lars. I’ve been to space before, but not like this. They’re taking me straight to their terrible leaders that want to destroy Earth and destroy me for something I never even did.”

It would be really nice if Steven could take a trip to space that didn’t traumatize him.

It would also be really nice if Steven stopped blaming himself for things far outside his control!

Steven is going to have to learn that he cannot negotiate with tyrants on the scale of the Diamonds. Nothing he could ever do would “fix everything”, let alone sacrificing himself for a “crime” he knows he did not commit. These are the despots which bubbled every Rose Quartz simply for being the same Gem as a rebellion leader. These are the bullies who would shatter a Ruby for doing her job. These are the fascists who destroy entire galaxies worth of living beings because they have no concept that anyone but themselves have value.

But Steven still has Lars, and although he feels bad about it, he’s glad he’s not alone.

And that is when Twopaz speaks.

“I don’t know what Topaz would do if she didn’t have Topaz… I’ve always wanted to tell me how I’m helping me through this, but there’s always someone between us!”

Besides all the hilarious con-fusion about identity and components and how they all fit together, wow. As soon as the voice of Martha Higareda came out of Twopaz, I think the collective Steven Universe fandom adopted three new space children (Topaz, Topaz, and Twopaz). It’s also nice to get confirmation that yes, same-Gem fusions can and do have concepts that they are different than their components, and Ruby’s explanation that fusion is just her, “but bigger” from “The Answer” is canonized as more Homeworld brainwashing.

Twopaz wants to help the humans escape, but Steven refuses to go with Lars. “I turned myself in. I still gotta go. Someone’s gotta pay for what my mom did.” BUT WHY STEVEN. 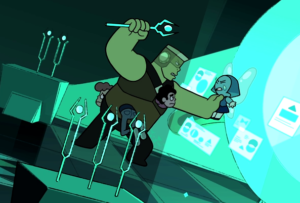 While he waffles, Aquamarine catches them. Before she can do more than smash the escape pod, Twopaz pins her against the wall, threatening her with a destabilizer. Aquamarine, wandless but not witless, knows exactly which of Twopaz’s buttons to push: “You’ll be…separated and shattered.” Separation is just as bad as death, for this big, beautiful banana. She sinks to her knees in defeat, the destabilizer clattering to the ground. Aquamarine is surprisingly merciful based on what we’ve seen from her character so far — does she have some genuine affection for the Topazes? Is she lonely, and perhaps a bit jealous of their connection? “That’s the problem with you Fusions. Sooner or later, you all become…sentimental.”

Twopaz unfuses, silent and stone-faced once more. As the Topazes exit the ship with Lars and Steven, they take the humans in opposite directions, entering voids of brightness.