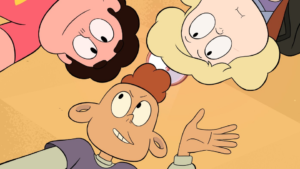 “The Good Lars” provides us with solid evidence that Lars Barriga is Filipino, which puts into perspective why he’s behaved the way he has so far.

Since the whole body-possession-for-a-day mess in “The New Lars“, it seems that Lars has become more honest with himself. This development was hinted at “The New Crystal Gems“, when we saw him openly hanging out with Sadie, but in “The Good Lars” it comes in the shape of a cake.

The fact that cagey, grumpy, too-image-conscious Lars is willing to do something as “lame” as baking and then bring it up to Sadie and Steven for a taste-test seems like a small but significant step in the right direction. No matter how reluctant he acts about it, baby steps are still steps forward. This interest might also explain why he took a job in The Big Donut, of all places.

“The Good Lars” begins with Buck Dewey dropping by to invite everyone to a potluck party (and can I just say that Lars’s freakout makes me wonder if he’s crushing hard on Buck?). After he leaves, Steven and Sadie assure Lars that this party is a great opportunity for him – he can hang out with the Cool Kids and show off his baking skills to them. And if he refuses to believe Sadie and Steven when they say he’s got mad baking skillz, he’s gotta believe it if the compliment comes from the Cool Kids.

The trio hangs out in Lars’s room and Steven and Sadie help him brainstorm the ‘perfect’ recipe for the potluck. “Maybe we should make something that represents you,” suggests Steven, which prompts Lars to decide on a special recipe he often enjoyed as a kid – Ube Roll Cake. 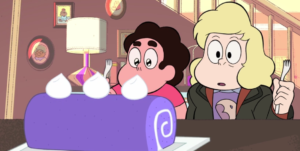 The purple yam (Dioscorea alata) is called many different names across the world, but “ube” is specifically from the Philippine Islands. Lars states that the roll cake is a family recipe. Additionally, his surname ‘Barriga’ (revealed in Keep Beach City Weird: You Can’t Hide The Truth!!!) is a Filipino surname of Spanish origin.

While not outright stated in the show, “The Good Lars” provides us with solid evidence that Lars Barriga is Filipino – something that makes me incredibly happy (yay, representation!). But more than that, this tidbit about Lars recolors his character to me, in a way that explains why he behaves the way he does. It’s amazing how one little detail about a character’s backstory shines a different light on their previous scenes.

Like Ronaldo, Lars is one of the few SU characters who have often rubbed me the wrong way. But unlike Ronaldo’s willful ignorance of the truths that are right in front of him, my issues with Lars are grounded in the realization that he reminds me too much of my past self. Trying to get in with the Cool Kids has long been established as one of Lars’s primary character motivations, ever since the aptly titled “Lars and the Cool Kids” episode back in season 1. He tries very hard to project the image of what he thinks is “cool” – even if it doesn’t necessarily align with how he honestly thinks and acts when he’s on his own – in order to “fit in” with how he perceives the Cool Kids.

This kind of behavior fits quite nicely under the concepts of “pakikisama” and “pakikibagay” – the readjustment of one’s individuality for greater group cohesion, a type of conformity practiced in order to get along well with others. Filipinos are very community-oriented; it’s something deeply ingrained in our culture and psychology. We highly value close-knit family relationships, social harmony, cooperativeness and unity with the group, among many other related ideals. Doctor of Anthropology Frank Lynch even coined “Smooth Interpersonal Relationships (SIR)” to help describe this core Filipino value in English terms.

Some may wonder, “But isn’t ‘smooth interpersonal relationship’ exactly the opposite of Lars’s relationships with others?” To that, I say “Yes, exactly.” Because Lars is going about this the wrong way. 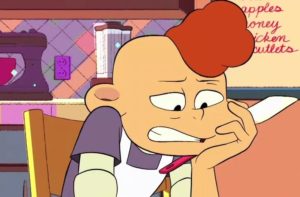 Steven to Lars: “Open up about your feeeeelings!”

While “keeping up certain appearances” is another thing people sometimes do to maintain Smooth Personal Relationships, the residents of Beach City have shown time and time again that they don’t really care about such things. They accept people regardless of their gender, family situation, hobbies, etc. But Lars, too caught up in his own ideas of how his immediate community works, doesn’t seem to realize that. Throughout the show so far, he has continually suppressed his true self to fit the mold of what is “cool”,  but all these efforts have only served to further alienate him from everyone. Even in “The Good Lars”, he expresses hesitation about showing up to the Cool Kids’ potluck with his ube roll cake – he’s willing to throw away another chance to get to hang out with the group he desperately wants to be a part of – because he’s afraid of coming across as “lame”.

But we the audience (and probably everyone else in Beach City) know that no one there would ever judge Lars for that. He doesn’t need to jump through all these hoops, because he’s the person who has been putting those hoops in his own way. Sadie even pointed it out: that if Lars would only give the Cool Kids a chance to get to know the real him – and if he tried to get to know the real ‘Cool Kids’ – he’d find out that they already like him.

For the longest time, Lars has been trying to relate with his own perceptions of the community he wants to be a part of, instead of the actual people in the community. This kind of behavior limits the exchange of trust and communication between people, which is one of the main themes of the show, and a very important part of any interpersonal relationship. But “The Good Lars” shows that maybe there’s hope for him yet; after opening up to Steven about his worries, Lars looks like he’s really enthusiastic about going to the potluck.

Steven and Sadie are disappointed, of course. They wonder if they should’ve tried harder to get him to come. Sadie says that sometimes she wishes she could just force him to be happy, but backpedals when she realizes she sounds like her overbearing mother.

“Maybe I should be trying to fix my life instead of his,” she concludes.

Steven and Sadie part ways as they head home, and the episode ends with ominous silhouettes looming on the street behind Sadie.

Additional Thoughts about “The Good Lars”: 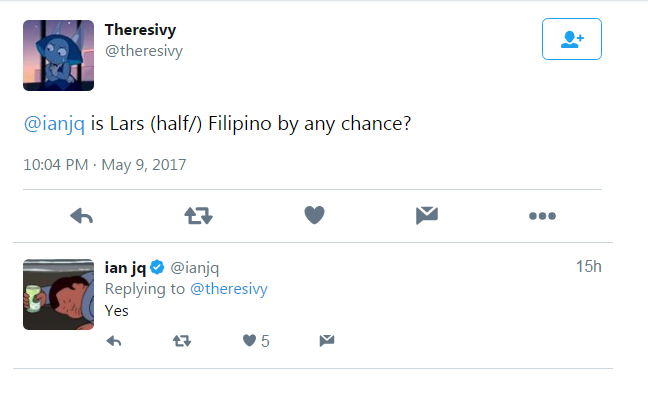