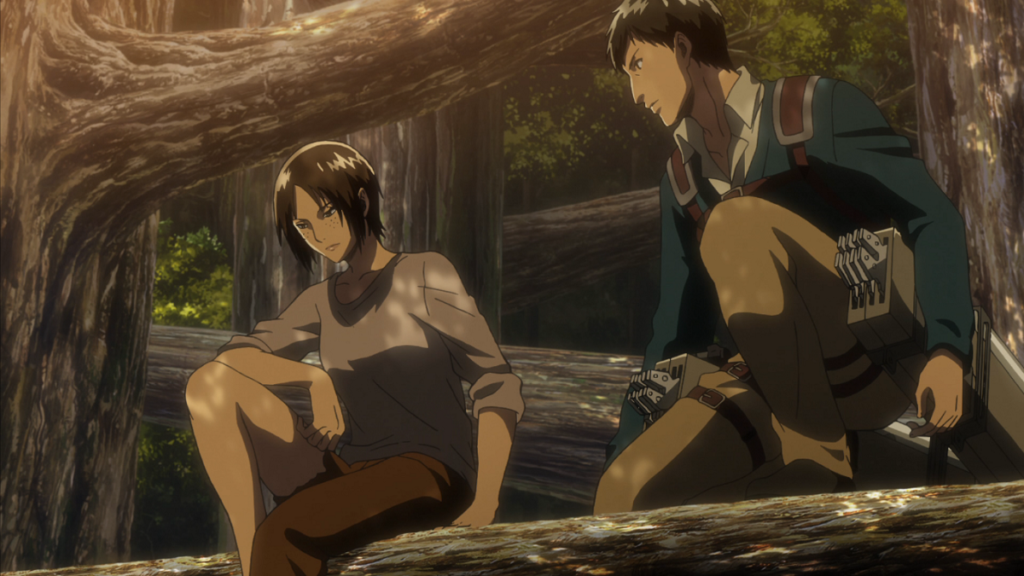 I think we’ve learned more in the past two episodes of Attack on Titan than we have during the entire second season. “Children” and “Charge” gave us some very important backstory as well as long-awaited answers.

Directly and indirectly, “Children” answered a lot of questions that I’ve had since I started watching Attack on Titan a few months ago. Bertolt and Reiner’s conversation revealed that a) Christa is important to the Church (though we kind of already knew that, considering how the priest talked about her) and b) everyone wants Eren because they think he’s someone important, too. They referred to him as the “Coordinate”, and they’re obviously bringing him to someone (Beast Titan?). That still leaves the question of why exactly Eren is such a big deal. Is it because of his father? What is in the basement and will we ever find out?

Ymir’s flashback gave us some big clues as well. We know that Ymir is from outside the walls, and it seems that outside of the walls, the humans have the ability to turn people into Titans. Ymir and her “followers” are injected with something before being kicked off the wall, and since Ymir was turned into a Titan it’s only logical to assume the others were as well. However, it isn’t until eating Bertolt and Reiner’s friend that Ymir turns back into a human. It’s safe to guess that their friend was also a shifter, considering the company he was keeping, so it stands to reason that a Titan eating a Titan shifter turns the Titan into a shifter.

“Children” piled on evidence for that whole everyone-in-Connie’s-village-turned-into-a-Titan theory that has been brewing since the beginning of the season. The misshapen Titan – who is still collapsed on Connie’s house – looks an awful lot like his mother in the photograph they found. Not to mention, she reacted to the scouts saying Connie’s name. So I think we can say that we solved the mystery of what happened to Connie’s village. Unfortunately, we still don’t know the how or the why.

“Charge”, meanwhile, was an action-packed episode after the relatively action-light episodes of the past few weeks. It’s also the first time we’ve seen all of the remaining members of the 104th together since last season. The scene when they’re trying to convince Bertolt to give up Eren tugged on my heartstrings. Almost every one of them has gotten some major development this season (still impatiently waiting for Jean’s episode), and so these moments between them now have a lot more depth and punch than they did before. Mikasa, unsurprisingly, was pretty badass. Christa clearly thought so, because she didn’t think that Ymir in Titan form stood a chance against Mikasa. Mikasa’s single-minded attention to Eren was explained when she said that after everything that’s happened, she can only care about a few people – and that’s basically Eren and Armin.

Armin, meanwhile, proved that he is just as badass as Mikasa, only his superpower is his mind. He was quickly able to deduce that Bertolt is in love with Annie and use that to his advantage. The look on his face when he was detailing all of the torture Annie must surely be facing is some kind of next-level psycho. Props also to Tomohisa Hashizume (Bertolt) for managing to shift so effortlessly from desperate and panicked to calm and collected. Just as Reiner’s big episode was a few weeks ago, “Charge” was Bertolt’s time to shine. 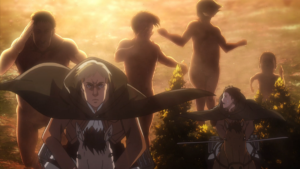 Now, let’s talk about Erwin Smith, the most boss commander to ever command. Gets carried off by a Titan and still manages to lead his troops. Gets his arm eaten and somehow manages to come back and save Eren with only the one arm. I was worried once the Titan grabbed him, but Erwin looked into the eyes of the god of death and said, “Not today.” It makes me wonder how much more epic the battle would have been if Levi had been there.

And then that ending… I don’t think most people would have needed the flashback to remember that the Titan that appears at the end of “Charge” is the same one that ate Eren’s mother, but the reminder was pretty chilling.

With only one episode left in the season, you have to wonder how they’re going to tie everything up. Of course, I wouldn’t put it past Attack on Titan to leave everything on a horrible cliffhanger and then make us wait years for the next season. There’s been no news about season 3 yet, but I hope it’s coming soon. I may have to cave during the hiatus and read the manga, because I have to know what’s going on.

What did you guys think of “Children” and “Charge”? What are your theories for where the story is going? Which characters do you suspect we’ll lose in the season finale (because come on, you know someone is going to die)?