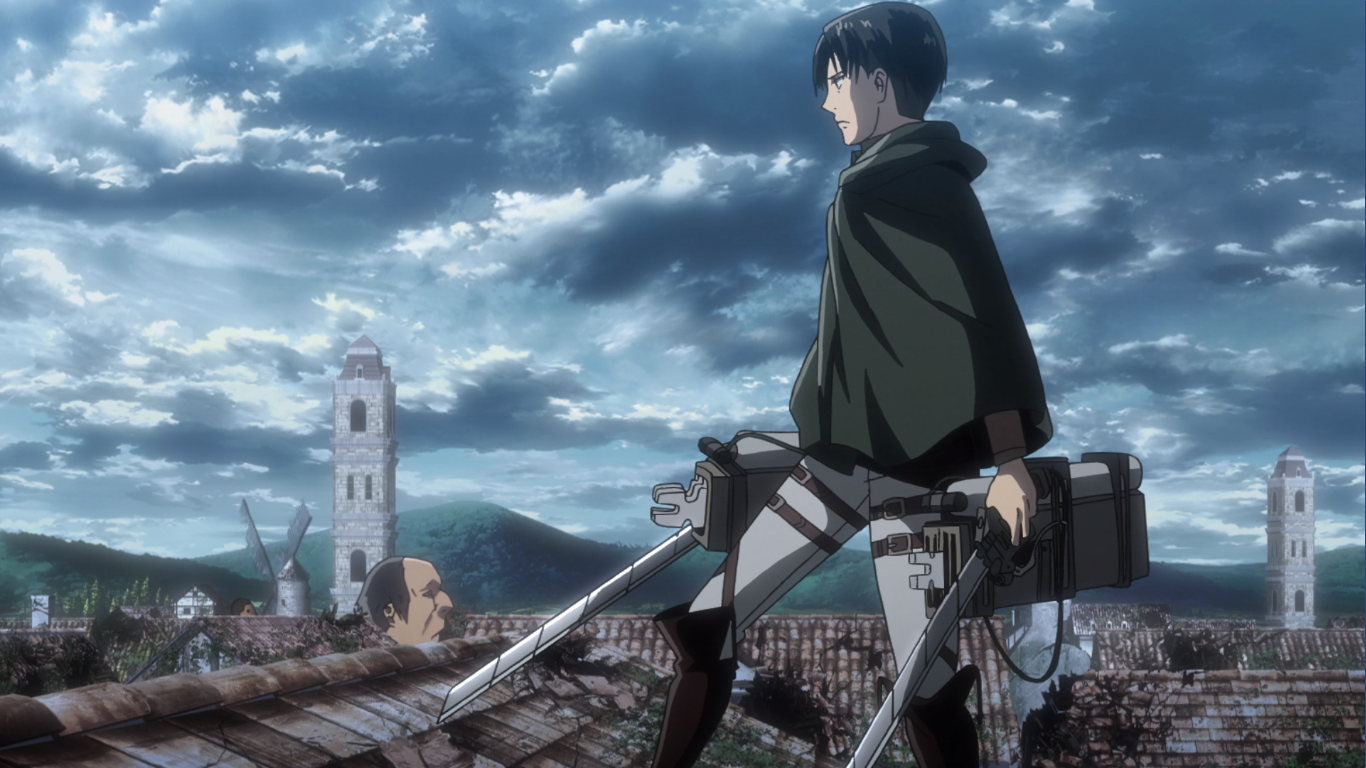 A lot happened in “Thunder Spears” and yet it seems like nothing happened at all, which I have a feeling is going to be par for the course in this arc of Attack on Titan. The focus in this episode was on bringing down Reiner, aka the Armored Titan.

Brains versus brawn is the theme of “Thunder Spears”, as it involved fighting – Levi taking out Titans cool as you please as well as Eren and Reiner going 1v1 – but it also involved strategy. Erwin and Armin are both out here proving that they’re better than you in every conceivable way, playing four-dimensional chess and thinking five moves ahead. Erwin quickly deduced that the Titans’ plan was to go for the horses and cut off their escape, and he just as quickly came up with a counterplan. True, we don’t yet know how successful it will be, but to do that in those circumstances is a huge skill. 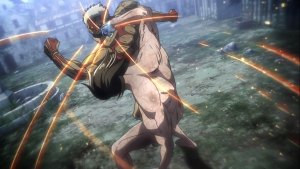 Even Eren and Reiner’s wrestling match involved strategy, as any good fight would. Eren experimenting with the hardening technique goes much further than just patching up the wall like we saw; he basically made himself some brass knuckles in order to better deal with Reiner. (Also, my ears perked up at the Annie mention – are we ever going to see her again?)

Meanwhile, Reiner was faced with a dilemma – continue with the original plan of him taking out the enemy horses or go after the obvious bait of Eren running away. He chose Eren, which will possibly be his downfall. True, he had no way of knowing that the Scouts have developed “thunder spears”, a specially-designed weapon for the sole purpose of killing him, but he also missed a perfect opportunity to take out Erwin. He’s a giant, armored Titan. He could have just, like, flicked Erwin off the wall. It’s obvious that Erwin is the brains; why would you not take the chance to get rid of the guy who makes all the plans?

On the other hand, Erwin standing there staring down the Armored Titan without flinching? Erwin is the boss.

I appreciated the remarks on how the Survey Corps isn’t what it used to be. Both Levi and Erwin comment on it. It’s a consequence of what they do, and it’s good that they acknowledge it. A lot of the veterans are dead, and these new recruits have not even seen a Titan before. 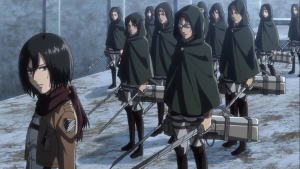 I also appreciated that the 104th still hesitates briefly before going in for the kill. It’s the Armored Titan, but it’s also Reiner, and as deep as that betrayal goes, those feelings of friendship don’t just go away.

The explanation for how Reiner survived Levi’s stab to the neck in “The Town Where Everything Began” is a little weak, but the animation of him removing the sword was actually pretty neat.

Speaking of animation, I really liked the scene where Erwin was contemplating the Beast Titan’s plan, because they chose to use a different style of animation and I thought it was very nicely done. (I’m currently binge-watching Black Clover and they do something similar for Asta’s demon mode.) The imagery of Erwin standing on a mountain of corpses was also well done.

Have you seen “Thunder Spears”? What did you think?

Previous:Uncanny X-Men Issue 17 Writer Matthew Rosenberg Addresses Controversy Regarding Trans Panic Violence
Next: “Aurora Rising” Is Like The Expanse But with Teenagers and Aliens