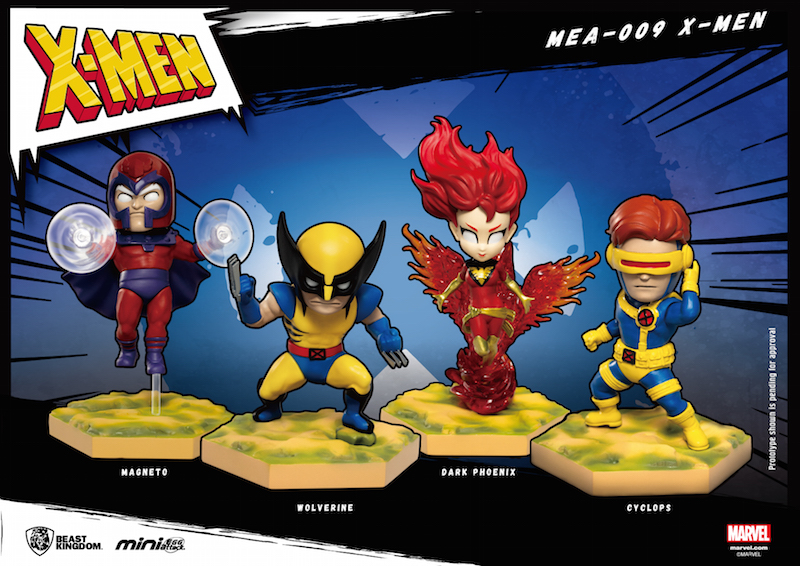 The release date for this X-Men Mini Egg Attack Statue Series from Beast Attack (designed and manufactured under license) is Q1, 2019. You will be able to pre-order on November 30, 2018, from BigBadToyStore and Entertainment Earth.

This Marvel X-Men Comic Mini Egg Attack Statue lineup has figures which are 3 to 4 inches tall. All of them are hand-painted with great detail.

With the debut of Marvel Comics’ X-Men in 1963 the world was introduced to one of the most infamous superhero groups that ever existed. The 1992 hit TV series has since become a staple of classic animation.

Cyclops, leads the pack with his laser eyed beams, which he contains with a special optical visor. Wolverine the unpredictable, wild card assists the X-Men with his adamantium claws. On the opposite end, Magneto is the regular foe of the team, who controls metallic elements with his mind, who uses levitation to soar above his enemies!

Finally, in the middle stands the great Phoenix. The on-off love interest of Wolverine, Jean Grey becomes arguably the most powerful mutant in the series, with near godlike abilities.

I like how the statues are inspired by the famous 1992 animated series. While I find all four to be very cute, if I were to choose, I would say the Dark Phoenix statue is my favorite.

Fingers crossed we get to see Storm added to this collection soon.

Are you a fan of the Mini Egg Attack versions of fictional characters by Beast Kingdom? What do you think of the X-Men Mini Egg Attack Statue Series? Let us know in comments section below!